Dane Belton a versatile piece in the Hawkeye secondary

As a freshman last season, Belton started the year on Iowa’s scout team. Now, he may be the team’s best player at two different positions. 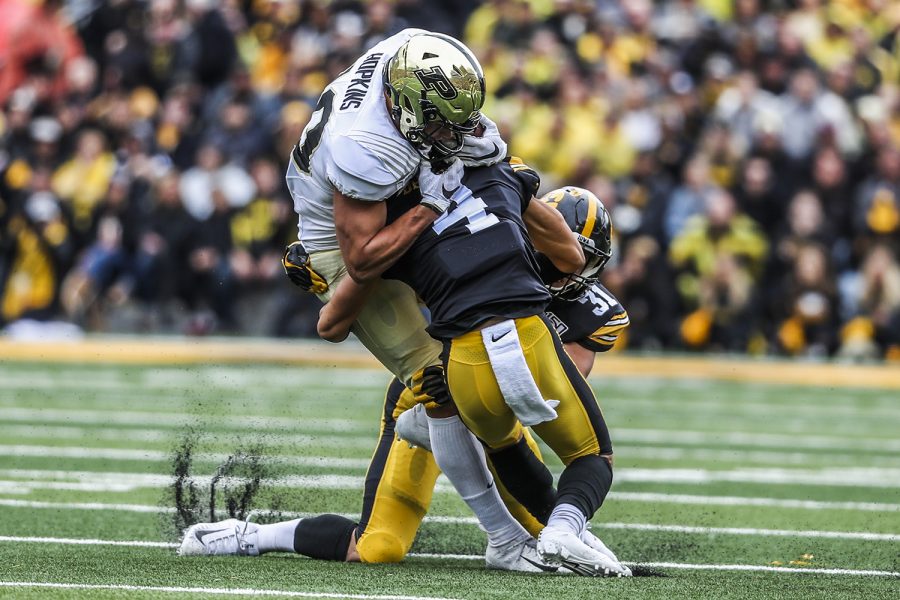 Dane Belton started last season on Iowa’s scout team. Now, he may be the best player at two different positions on the Hawkeye defense.

As a freshman in 2019, Belton sat during Iowa’s first three games before seeing his first playing time.

“We had some scrimmages against each other in practice,” Belton said. “And that was when I got the opportunity to show that I can play.”

Belton played in his first game at the college level the following week against Middle Tennessee. His performance must have made an impression on Iowa defensive coordinator Phil Parker, who moved the defensive back into the “cash” — a nickel corner who also plays on the inside.

After losses to Michigan and Penn State the next two weeks, Parker shook up the defense. The coordinator changed Iowa’s traditional 4-3 defense to a 4-2-5 base lineup. The scheme worked for the Hawkeyes in 2018 with Amani Hooker playing that crucial spot in the secondary.

Belton was a regular on the field for Iowa the rest of the season, earning four starts and appearing in eight total games in 2019. The Tampa, Florida, native also started for the Hawkeyes in their 49-24 victory over USC in the Holiday Bowl and recorded six tackles.

In 2020, Parker probably wishes he could start Belton at multiple spots. Heading into the new season, the back said he is playing strong safety for the Hawkeyes in their 4-3 defense and switching over to cash in subpackages.

“I always wondered if it were better for him to be at one spot,” Parker said. “We have some other guys that have opportunities to go in there. I think he’s really capable of doing both.”

RELATED: Talented Hawkeye receiving corps focused on living up to the hype

Parker mentioned safety Kaevon Merriweather and cornerbacks Matt Hankins and Riley Moss as players that could also fit well at the cash position when the team needs them there.

But Belton is up to the challenge of playing anywhere in the Hawkeye secondary.

“Personally I don’t care what I play, as long as I’m on the field contributing to the team’s success,” Belton said. “It doesn’t matter where Coach Parker puts me at. Wherever he sees fit, I’ll do it.”

Currently, Belton is replacing Geno Stone as Iowa’s starter at strong safety. Next to him in the secondary is Jack Koerner, who made his way into the Hawkeye lineup last season and stuck to his spot at free safety. Merriweather will likely step in as strong safety whenever Belton moves to cash.

At corner, Hankins and Moss are the starters on the preseason depth chart. Julius Brents and Terry Roberts are also vying for playing time.

“We really have a lot of diversity in the DB room this year between guys who have experience and where they can play on the field,” Koerner said. “Pretty much all of them have been able to prove that they’ll play at a high level this year and we’re certainly excited about that in the DB room.”

And the players in that DB room will be challenged right from the start.

The Hawkeyes open the year in West Lafayette taking on Purdue, a team known for its passing attack and deep talent at wide receiver.

“We have started looking at Purdue,” Belton said. “We have all this extra time, so why not get a little extra ahead even if it’s not Game Week.”