The Iowa City Climate Strikers questioned why the UI still burns coal and why Iowa’s greenhouse gas emissions rose by over 3 percent in 2018 despite the annual statement released by UI’s Center for Global and Environmental Research. 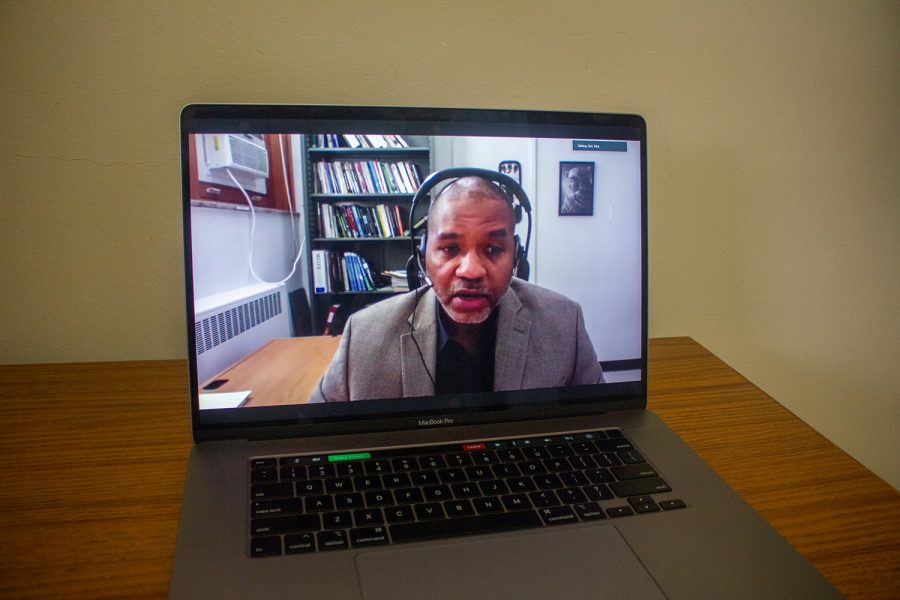 University of Iowa associate professor from the Department of Geographical and Sustainability Sciences, Eric Tate, speaks during the tenth annual Iowa Climate Statement over Zoom and Facebook Live on Oct. 7.

The University of Iowa’s Center for Global and Environmental Research’s annual Iowa Climate Statement, a briefing signed by 230 climate scientists and educators on the current state of climate science and its impacts on Iowans, which outlined lessons from the pandemic to proactively combat climate change.

The statement affirmed relying on peer-reviewed science in the face of polarization of science, spending early to reduce later costs of intervention, and building community resilience for vulnerable communities likely to be affected most by the changing climate.

The statement, however, was met with derision by local climate activist group Iowa City Climate Strikers.

The group took issue with UI scientists releasing a statement on climate change while the university continues to burn coal. The UI has pledged to be coal-free by 2025. , but the climate strikers say that isn’t quick enough.

Massimo Paciotto-Biggers, a climate activist who went on strike from school in solidarity with Swedish climate activist Greta Thunberg last spring, criticized the climate scientists and the UI’s energy management practices in an email to The Daily Iowan.

“Ask why they needlessly burn coal in a time of climate emergencies? Ask why they have increased natural gas use by 61 percent, and the UI biomass program is still tiny? Ask why U Cal and many universities are going carbon neutral and Iowa still burns coal?” Pacitto-Biggers wrote in his email.

The UI’s center for environmental research has been releasing annual climate statements since 2011, and each statement addresses a specific topic.

“This year, we are talking about what were some of the lessons that we’ve learned from the coronavirus epidemic that we feel are applicable to climate,” said David Courad-Hauri, Professor of Environmental Science and Sustainability at Drake University and one of the co-authors of the statement.

Silvia Secchi, an associate professor in UI’s Department of Geographical and Sustainability Services and a co-author of the statement, also noted that the scope of the statement goes beyond Iowa City.

“There’s 230 people [from across the state] who signed this, so to make it all about the coal plant may be a little bit provincial,” said Secchi.

However, Secchi did acknowledge why some members of the community might be skeptical of the statement given the “terrible” signal the coal plant sends, calling the plant the “antithesis” of sustainability.

“I think we’re taking care of the problem, not as fast as we should perhaps,” Secchi said. According to the UI’s Power Plant brochure, the UI is working to completely eliminate coal usage in the plant by 2025 in favor of a biomass-based fuel called green energy pellet. It also notes that one of its four boilers has been running on only green energy pellets since August of 2017.

While there is some controversy around the true sustainability of biomass fuel, Secchi said that for Iowa the energy source is carbon neutral.

“It is a carbon-neutral source if you are not changing the land use… [But] I wouldn’t advocate for the use of biomass in the Amazon rainforest, because then we’re cutting that rainforest, which is a very good carbon sink,” Secchi said.

“We want to decouple economic growth from emissions, so we want emissions per dollar to go down. When you look at these carbon emission increases, you want to look at the economic activity levels. That’s the levels that people normally use, not just the level of emissions,” said Secchi.

Based on data from the Bureau of Labor Statistics and the DNR report on carbon emissions that Paciotto-Biggers cited, the cost per dollar of annual emissions has steadily decreased while total greenhouse gas emissions have remained relatively similar since 2009, meaning that sustainability efforts have successfully reduced the amount of emissions the Iowa economy needs to sustain its growth.

Secchi said that Iowa still has lots of room to improve on its sustainable energy efforts, and that the Hawkeye State is actually ahead of most of the U.S. in terms of its energy practices.

Courad-Hauri also noted that climate scientists have a separate role from activists.

“We’re trying to share information… but how people use it in terms of activism is up to them,” Courad-Haurim said.

Secchi also identified as a non-activist, saying that her role is to just state the facts. She said that doing nothing to curb the climate crisis still comes at a cost.

“There is no way not to pay a price; doing nothing, pretending that climate change is not happening is not a costless thing,” Secchi said.