Incumbent Rep. Bobby Kaufmann, R-Wilton, says he has a history of delivering bipartisan results for the 73rd District, but Johnson County Sheriff Lonny Pulkrabek said his election would bring more balance to the state government. 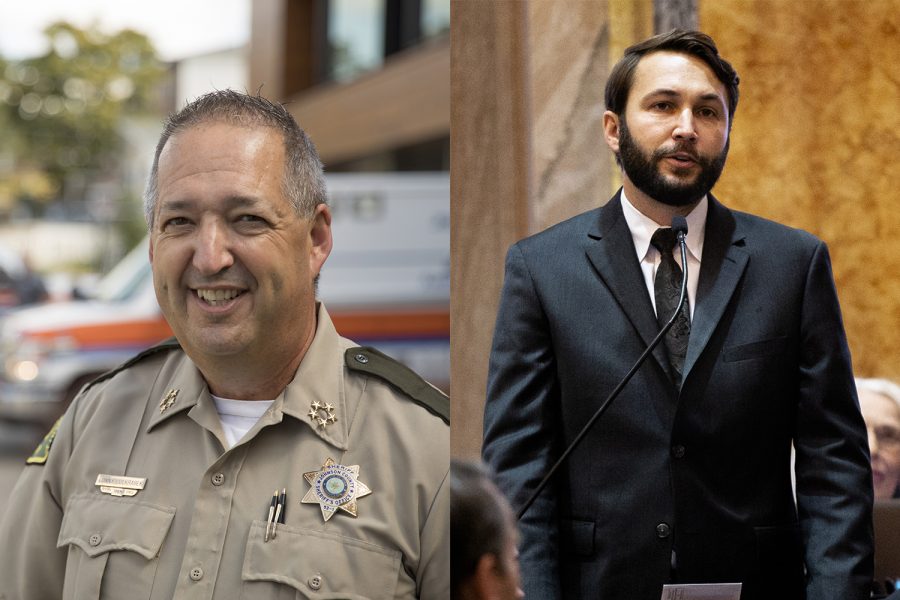 Johnson County Sheriff Lonny Pulkrabek’s bid to unseat four-term Rep. Bobby Kaufmann, R-Wilton, is an uphill battle, in his own words, however the race is one of many that some Iowa Democrats hope will help them flip control of the statehouse in the 2020 elections.

Republicans currently hold the House, the Senate, and the governor’s office, but Democrats are only four seats shy of a majority in the House. Pulkrabek, 57, is the highest-profile Democrat to challenge Kaufmann since he was elected, and focus on his campaign has brought in money from around and outside the state.

Flip it Iowa, a Democratic group dedicated to flipping the Iowa House, lists the 73rd House District on its website and has a link to donate to Pulkrabek’s campaign. Flip it Iowa hosted several fundraisers through 2020, but it ended its operations in mid-September.

Larry Hogdgen, chair of the Cedar County Democrats, said the race will be a tough one for both Pulkrabek and Kaufmann, and that he thinks Pulkrabek can mount a good campaign. Pulkrabek and other Democrats in embattled districts should convey their values and priorities to voters, he said, and communicating that well will be vital to picking up seats.

“It’s important for the Democrats to tell their story and what Democrats have stood for, and what the Republican legislature has done to the state of Iowa in the last eight or 10 years,” he said. “… They’ve taken away union rights; they’ve closed mental hospitals.”

Despite the Democrats’ play to take control of the House, some Republicans think their party can be on the offensive in 2020. David Barker, a member of the Iowa Republican Party Central Committee from Iowa City, said he sees a lot of support for Kaufmann in northeast Johnson County, and that he believes Republicans can grow their majority in the November elections. Barker is also a member of the Board of Regents, which governs the state’s public universities. He was appointed in 2019 to a seat on the board, which by law is required to maintain a balance between Democrats and Republicans.

“There are a lot of House seats that will be competitive, and I think there may be some surprise seats that switch from Democrat to Republican,” he said.

The areas with the largest number of contributions include Washington, D.C., Maryland, and California.

Pulkrabek said the interest in his campaign from across the state and country shows he has a wide appeal, and that people want more balance in the state government.

“What people have told me is, they believe I have a great story,” Pulkrabek said. “I’ve been a public servant my whole life, I’ve been giving. I was going to retire, and I had people approach me and say, ‘We really need someone who is a middle-of-the-road moderate for this district.’”

Opponents say this type of fundraising is disingenuous, however, and that it’s an effort to bring influence from coastal states to Iowa. Kaufmann said the fundraising is hurting Pulkrabek’s campaign, and that Kaufmann’s campaign is more connected to its constituents.

“That kind of campaigning is actually beneficial to me,” Kaufmann said. “My money is coming from Iowa. People talk to me, the candidate, themselves.”

Barker said he thinks outside money in Iowa races would do Democrats more harm than good.

“There is a lot of money coming in from outside Iowa to try and influence the Iowa Legislature,” he said. “And I think that’s concerning to a lot of Iowans, because they would like their legislators to answer to them, not to out-of-state interests.”

According to financial reports as recent as July 19, nearly all of Kaufmann’s individual donations are from Iowa, however, he has substantial donations from Iowa-based PACs and a few outside the state, both from industry groups like the Associated Builders & Contractors of Iowa, and from corporate PACs, such as HyVee. A little more than $61,000 in donations up to July 19 came from PACs, while $90,400 was in individual contributions.

RELATED: Dispatching outside the ‘blue bubble’, Flip It Iowa aims to turn Iowa House to Democrats

The two candidates are approaching campaigning differently as well, as the coronavirus has dashed the traditional pancake breakfasts and 4th of July parades that are a staple of running for state office.

Democrats and Republicans statewide are split on how to treat the health concerns that come with campaigning during a pandemic. Democrats are largely avoiding door knocking. Pulkrabek said he’s dropping literature at homes, but taking precautions by not having people come to the door.

Kaufmann, on the other hand, has knocked on more than 10,000 doors. He said meeting voters in person is the way to win a seat in the statehouse. Kaufmann said he’s taking precautions by wearing a mask, leaving flyers on the door, and backing up several feet before the person comes to the door.

The Republican from Wilton said he hasn’t received complaints about his campaign style.

“I’ve done what I’ve always done, and that is, you don’t run for office and hide from the voters,” he said. “So, I’ve been getting out there in front of everybody as much as I can.”

Pulkrabek said he’s been conducting his campaign mostly virtually. He’s held virtual forums and online phone banking. He held a drive-in event in West Branch Sept. 4, speaking outside the Cedar County Democrats building with an AM radio transmitter and allowing attendees to listen by turning to a certain frequency on their car radios.

He recognizes how introducing himself to voters face-to-face can be helpful, Pulkrabek said, but he doesn’t want to endanger people’s health or make them feel nervous. He criticized door-to-door campaigning, as an example of how Republicans have irresponsibly handled the pandemic.

“You can knock on the door and step back, but this virus is nothing to mess around with, and I don’t think it’s a good idea to be knocking on people’s doors right now,” he said.

Hogdgen acknowledged that the lack of door-to-door campaigning could create a disadvantage for the former sheriff.

“Currently all they’re [Pulkabrek’s campaign] doing is just putting a lit drop at the doors for people to pick up and read,” he said. “I don’t doubt that personal interaction can make a difference in a race.”

Both of the candidates are hoping to convince voters they will be an independent, bipartisan voice for the whole district, which is fairly evenly split between Republicans, Democrats, and independents.

Pulkrabek said Kaufmann’s record shows a history of partisanship and ineffectiveness. He said Kaufmann overwhelmingly sides with the Republican Party on votes rather than working across the aisle. Pulkrabek pointed to the 2020 House session, in which he said Kaufmann voted with Republicans 99.2 percent of the time.

The House Journal for the 2020 legislative session shows that Kaufmann voted with Republican Speaker for the House Pat Grassley 255 out of 257 times. However, 184 of those votes were bipartisan bills, which were also supported by a majority of Democrats.

Kaufmann said the statistic is misleading, as most of the bills passed by the Legislature were bipartisan bills. He also said that, as chair of the State Government Committee, he took up a number of Democrat-sponsored bills and made them bipartisan.

“I took countless Democratic bills and turned them into study bills,” he said. “Which made them a Republican bill … He’s misleading people when he says that to the district.”

Any time the state government is controlled by one party, Pulkrabek said, there is a danger of partisanship and imbalance. He said flipping the House is a goal of his campaign, but his main goal is to represent the interests of the constituents and be a moderate voice in the House.

“I’m a firm believer that the state does better when there’s balance and transparency,” he said. “And right now, the Republicans control all three sections of government, and I don’t think that’s good.”

Kaufmann said he works with both parties and has a history of passing legislation that’s beneficial to his constituents. He added that, as the sole Republican representing Johnson County, his seat also brings balance to the county’s elected officials.

“I would apply that same logic to Johnson County and say it makes more sense for one member of the other party to work with the clear majority of elected people in Johnson County, which is Democrats,” he said.