Amid a murky forecast for the presidential election and concerns that a winner may take weeks to call nationally, Iowa officials hope that a rule change will allow for a more streamlined reporting process. 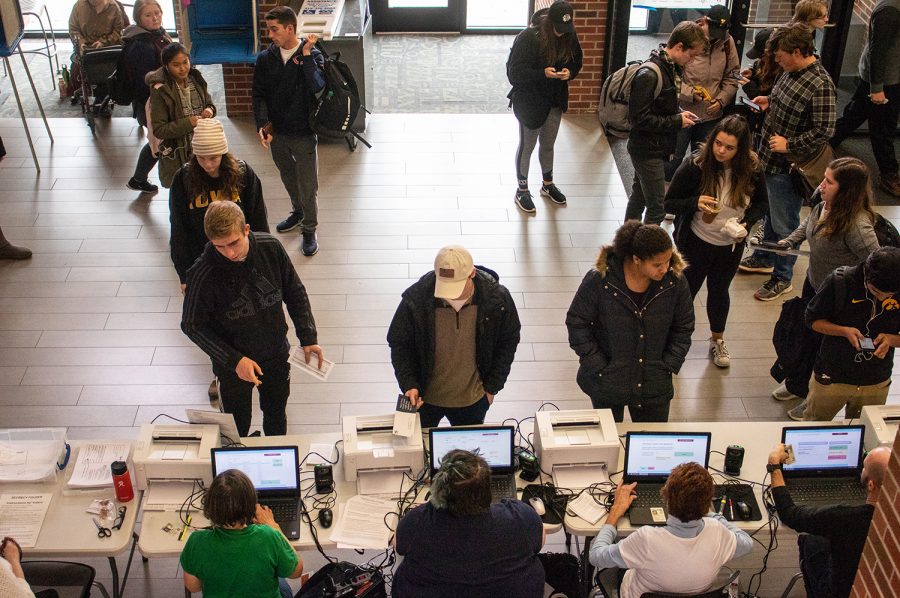 Voting took place from 7am to 9pm.

While the U.S. braces for an unpredictable presidential election that may take days to call, Iowa leaders are taking steps to ensure the winner of Iowa’s six electoral votes is clear on Nov. 3.

The question of whether a clear winner will emerge on election night hangs over the presidential campaigns with less than a month until Election Day. Because of the coronavirus pandemic, several states have expanded their absentee ballot operations, and a record six in 10 Americans plan to vote early — either in person or by mail — according to a recent Washington Post-University of Maryland Poll.

Against this backdrop, President Trump has repeatedly claimed the election will be rigged and absentee votes will be rife with fraud, though there’s little evidence linking absentee voting to widespread voter fraud. In a fiery debate on Sept. 29, Trump notably did not say whether he would wait for the election to be independently certified before claiming victory, and he has made several statements that he wants to see a victor declared on election night.

The variance in state election laws makes for a confusing and specific set of rules for counting ballots. Election officials in certain states — including some battleground states — are not allowed to begin processing ballots before Election Day, meaning counting ballots could last days, or even weeks, after Nov. 3.

Iowa is no stranger to waiting for a winner in politics. The 2020 Democratic caucuses in February — administered by the Iowa Democratic Party — ended without a clear winner for days because of a botched reporting system and technical difficulties.

Still, Iowa politicians and election officials are confident in the state’s ability to have clear results on election night. On Sept. 25, the Legislative Council approved a directive from Iowa Secretary of State Paul Pate to allow auditors to begin opening absentee ballot envelopes on the Saturday before the election. Absentee ballots are returned in a sealed envelope, and auditors are usually only allowed to begin opening and counting those ballots on the Monday before the election.

In a statement to The Daily Iowan, Pate said the process of opening the ballots takes longer than actually counting the ballots, and allowing the extra time will speed up the process. Auditors will be able to begin feeding ballots into counting machines right away Monday morning.

“We feel this will give auditors ample time to have everything ready to report on election night, and we don’t anticipate significant delays in reporting statewide results,” Pate said.

“We’re required to be done by 10 o’clock on election night,” he said. “That Monday when we actually can start tabulating, we’re looking at working well into the night with different teams.”

While Weipert said the office would be able to count all the ballots that are in the office by Election Day, ballots can still be accepted until Nov. 9 as long as they were postmarked by Nov. 2. Weipert said there will likely be more ballots coming in late this year, but he doesn’t expect those ballots to change the outcome of the election.

Members of the Legislative Council said the change will allow votes to be tabulated quickly and provide a clear winner of Iowa’s elections on election night.

State Sen. Joe Bolkcom, D-Iowa City, said the process of opening and preparing ballots can be time-consuming, so giving the extra days will put election officials in a good place to report results quickly.

“A whole bunch of this clerical paper pushing will be able to be done before Election Day, which will allow, I think, for really a relatively smooth operation of the counting process,” he said. “…They should surely be able to count all the early ballots that come in by the time the polls close.”

State Rep. John Wills, R-Spirit Lake, the speaker pro tem of the Iowa House, said he has confidence that the U.S. Postal Service will be able to deliver ballots quickly and that auditors will be able to handle the volume of ballots.

“I would predict that we will have results on the evening of November 3,” he said. “If not, it will be shortly after that. I’ve heard, ‘it could take weeks,’ I don’t think for Iowa, I don’t think it’s going to take weeks.”

Wills said Iowa’s absentee-voting system is robust and he doesn’t think the legitimacy of Iowa’s vote will be questioned.

“We have a good process in which people will request ballots and then verify that you are actually who you say you are,” he said. “So I have every confidence that we’re going to be just fine here in Iowa.”

Aaron Britt, a spokesperson for the Iowa Republican Party, said in an email to The Daily Iowan that the party is confident in election officials’ ability to return results quickly and without issue, but they will have attorneys available if necessary. The campaigns of both Biden and Trump are amassing a stockpile of lawyers, according to reports, for what is expected to be a massive legal fight over the results of the election.

“Just like every other election, we’re treating the upcoming General Election with the utmost importance. That includes utilizing our robust ground game to get out the vote, deploying poll watchers and resources for those who have questions about voting on Election Day, and having attorneys on standby if anything arises that requires consultation,” Britt said.

Bolkcom said Iowa has had almost no cases of fraudulent voting with absentee ballots, and he hasn’t heard much talk of challenges to absentee ballots this year. The Heritage Foundation, a conservative think-tank that keeps a database of criminal voting cases, lists three cases of attempted misuse of absentee ballots in Iowa since 2011. Two people received criminal convictions and one was ordered to perform community service.

Bolkcom said voters should be confident that if they vote by mail, their vote will be counted. He said Trump’s comments are an effort to shave off voter turnout by discouraging people from voting.

“Him trying to undermine the credibility of mail voting is really despicable,” Bolkcom said. “And it’s his effort, I think, to try to steal the election. One of a number of strategies.”