In order to enhance the services for students and staff on campus, The University of Iowa will explore potential external partnerships for the Iowa Hawk Shop and University Bookstore. 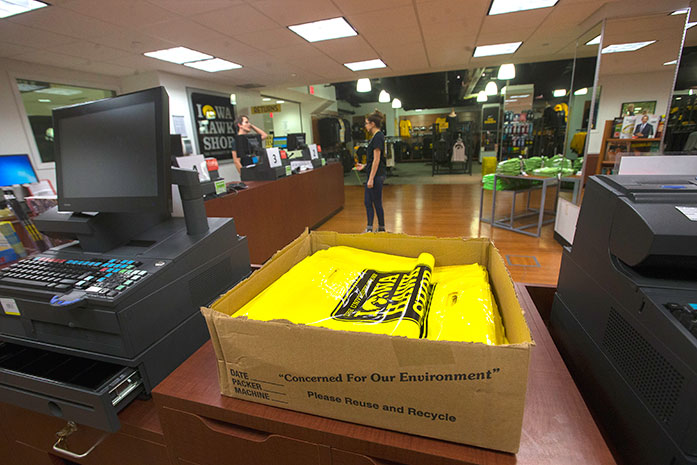 Iowa Hawk Shop bags sit on the counter of the store in the Iowa Memorial Union on Tuesday Feb. 28, 2017. The Hawk Shop wants to reusable bags in the store.

The University of Iowa of Iowa is exploring a potential partnership with a private company to manage its Iowa Hawk Shop and University Bookstore – a move many other Big 10 universities have taken  – as the shops have lost the university hundreds of thousands of dollars in the last five years.

The store has generated about $11.3 million in gross revenue, but has operated at a net losses totaling more than $100,000 every year since fiscal 2015. Those losses do “not including many central support costs such as marketing, accounting, human resources,” Director of Media Relations Anne Bassett wrote in an email to The Daily Iowan.

Associate Dean and Executive Director of the Iowa Memorial Union Bill Nelson said the goal behind this is to help manage the daily operations of both locations and gain more opportunities for students and staff.

The Iowa Hawk Shop, located on the ground floor of the IMU, was hit hard by the 2008 flood. After relocating and then moving back to the Iowa Memorial Union in 2015, it has struggled to regain its financial footing due to the competition from large retailers in the online market, according to a release from the Division of Student Life.

“We are committed to our entire Hawk Shop team and to the best interests of our staff, the Iowa Memorial Union, the University of Iowa, and the customers we serve. The expectation for any potential partnership is to maintain the same level of customer service,” Nelson said in the release.

Bassett said nationwide, it is more common than not to have the campus-affiliated bookstore operated in a partnership with a private-sector operator.

If the UI chooses to work with a private partner, a process will be developed for current employees to become part of the new entity or to work with University Human Resources to review their options within the university system, Bassett added.

Nelson said in the release that no final decision has been made on whether to move forward with private management, and added that there will be no disruption of service for students, retail partners, and departments during the search.

“We’re also asking potential partners to prioritize student employment opportunities and our Iowa Guided Reflection on Work program because the data are clear: Student employment, when it occurs on campus, has a significant positive impact on student success,” Nelson said. “We will expect nothing less.”