Having committed to Iowa over four years ago, the Colorado native is ready to show her amazing talent. 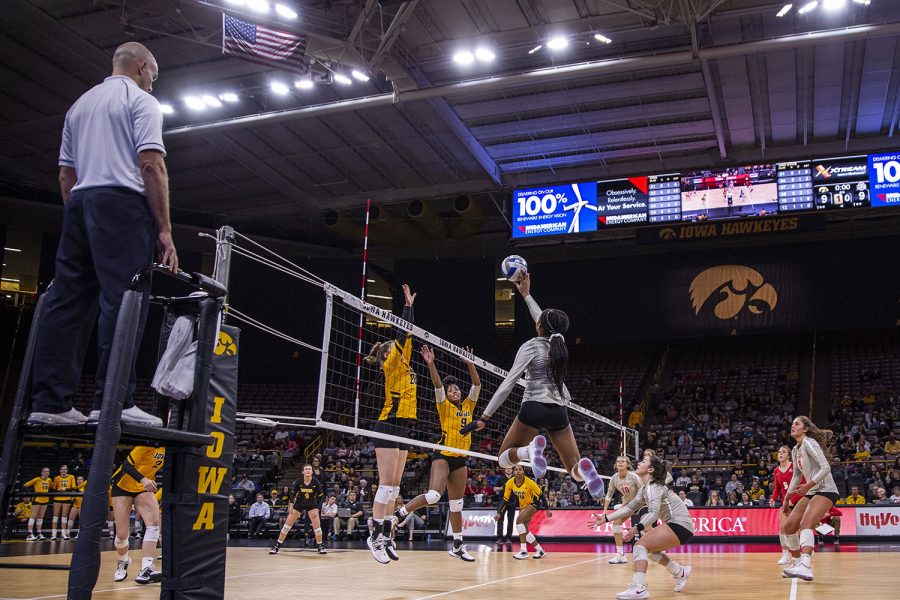 Ohio outside hitter Jenaisya Moore hits the ball to the Iowa side during a volleyball match between the University of Iowa and Ohio State University at Carver Hawkeye Arena on Friday, November 29, 2019. The Buckeyes defeated the Hawkeyes 3-1.

Before she had played a high-school game, Lowry committed to Iowa in summer 2016.

“They spent the whole day with me,” Lowry said of her Iowa visit. “I was the only recruit on campus, and – I don’t know – it was a really good feel and my dad’s from Iowa so it just really felt like home for me.”

In her career at Castle View High School in Castle Rock, Lowry set the Colorado High School Activities Association record for digs in a career at 2,177. Other impressive statistics from her time there were six digs per set, 1,614 receptions, 256 kills, 154 assists, and 178 service aces.

She was named all-conference in all four of her high school years. She was also a 2019 Colorado Gatorade Player of the Year Nominee and an honorable mention for Under Armour All American.

Even with the head-coach change from Bond Shymansky to Vicki Brown last year, Lowry received a reassuring call from Brown – who joined the Iowa coaching staff in 2017 – confirming that Lowry wanted to officially commit as a Hawkeye in November.

“A good player is a good player,” Brown said. “So, it was no question about Leanne for me. When I had saw her when I first came in here, it was like, ‘OK, this makes a lot of sense.’ The kid has a good touch, she’s solid, she moved well. So yeah, it was a no brainer.”

Lowry enrolled at Iowa in the spring, which helped her focus on her technique and get used to the team and coaches before practices were cut short because of COVID-19.

Her family moved to Ankeny when she enrolled, so she went there when athletics shut down in the spring. She came back to campus toward the beginning of July for optional summer training. The team is now practicing in the new Xtream Arena in Coralville in preparation for a season start in January.

Brown said Lowry is calm and already starting to figure out the collegiate speed on the serve and attack. Also, as a good reader of the game, she’s starting to find a rhythm and generate more speed at first step.

RELATED: NCAA Division I Board of Directors announces dates for fall sports in spring

There are two other freshmen on the team. Bailey Ortega, a setter from Davenport, also enrolled in the spring. Outside hitter Audrey Black is from Aurora, Colorado, and played club volleyball with Lowry.

“I mean we all get along really nice,” Lowry said. “And we definitely have our talks here and there just like, ‘Oh this is hard or today was a rough practice,’ but then we have those talks too, that’s like ‘Today went really good and we’re excited for the season,’ so it’s good to have them and just kind of go through the ups and downs.”

Though Lowry is an exceptional player, there are no guarantees as to what the lineup will look like yet.

“The good thing with our program growing is that there’s competition at every position,” Brown said. “And so, it’s really just going to be about how she grows her technical side and then also enhance her vocal leadership.”

For now, Lowry is taking it all in.

“Obviously, I love to play,” Lowry said. “But I’m not really one that focuses on if I’m going to be a starter or will get a lot of playing time. I’m just here to enjoy the experience and to get better every single day.”