Hawkeye men’s tennis team making the most of long offseason

With the postponement of the fall season, the Hawkeye men’s tennis team is focusing on improving during an extended break. 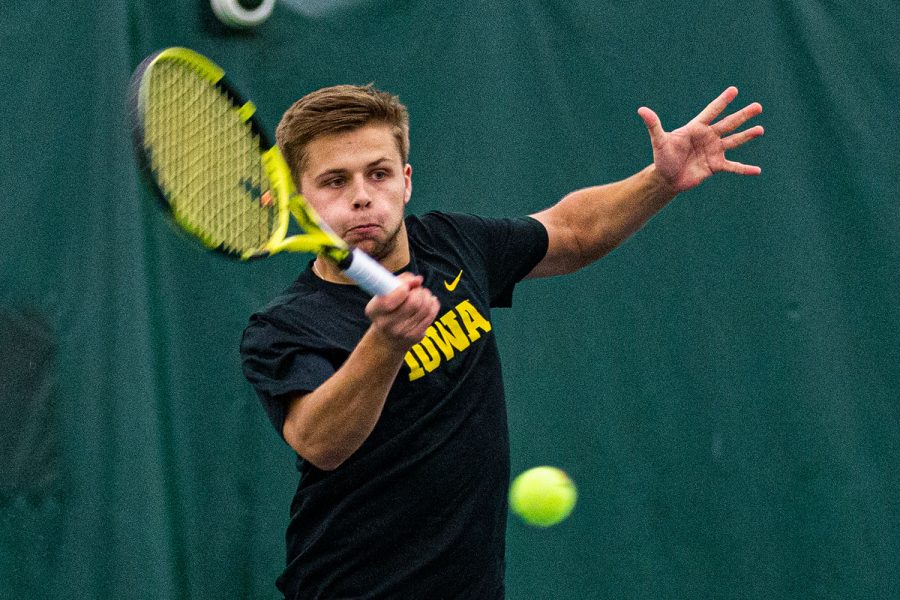 Iowa's Will Davies hits a forehand during a men's tennis match between Iowa and Texas Tech at the HTRC on Thursday, Jan. 16, 2020. The Red Raiders defeated the Hawkeyes, 4-3.

The fall 2020 semester has not produced a lot of positives for the Hawkeye men’s tennis team, from the postponement of the program’s fall season to the announcement of its discontinuation after this year.

After achieving a program-best national ranking of 20 last fall, however, the men’s tennis team aims to improve in hopes of living up to the hype surrounding it this season.

“I think you make the situation out for what you want it to be,” men’s tennis head coach Ross Wilson said. “We have a lot of really good players on our team – the deepest team we have ever had here at Iowa – so guys are going to get that experience in practice matches.”

After many months with a limited ability to get on the court because of various COVID-19 restrictions, the Hawkeyes are now focused on improving their fitness and getting in shape to play in men’s open events later this fall and make a deep run in the spring.

With the absence of a fall season, the players are also free to make more adjustments to their game that they wouldn’t normally.

“A couple of the guys are working on serves and returns because they really want to improve on that,” junior Will Davies said. “Now is the time to do it because it is very difficult to make changes in the middle of the season.”

Davies contracted COVID-19 at the end of August and had to quarantine for two weeks in a hotel. The second-team All-Big Ten player also had to wait on a heart scan before being cleared to practice.

After the five-week journey to get back to the court, Davies – like many of his teammates – has tried to focus on getting back in the competitive shape that he was in last spring.

“We’re building up the intensity and the workload day by day and getting after it in the gym,” Davies said. “I am just trying to get the fitness back up to 100 percent and just take a lot of balls and repetitions.”

For the four new faces of a very highly anticipated freshmen class, this fall will make for a unique start to their college careers.

With the long break before college competition in the spring, however, the young guys will now have more time to work with the Iowa coaching staff and get acquainted with the University of Iowa before stepping on the court as Hawkeyes.

“Being able to keep the ball cross-court and hit it deep as well as being very physical with their movement in their legs so that they can keep as much pace and depth on the ball as they can are things that I don’t think are focused on in juniors as much but are an absolute necessity here,” Wilson said.

Wilson said being able to finish at the net consistently is also somewhat overlooked at the junior level, but the younger players will now have more time to improve upon these skills this fall.

The tennis team will start its 20-hour practice weeks later in October, and the players have also committed to staying in Iowa City over Christmas in order to get back on the court Dec. 27.

“At least for us and our team, I think the small things make big differences,” Wilson said. “We improve a lot because we have a lot of good players to practice with on a day-to-day basis and the level they do it at is extremely high.”