Josey Jewell and George Kittle posted career-best performances in the fourth week of the season, and C.J. Beathard brought life to the San Francisco 49ers offense. 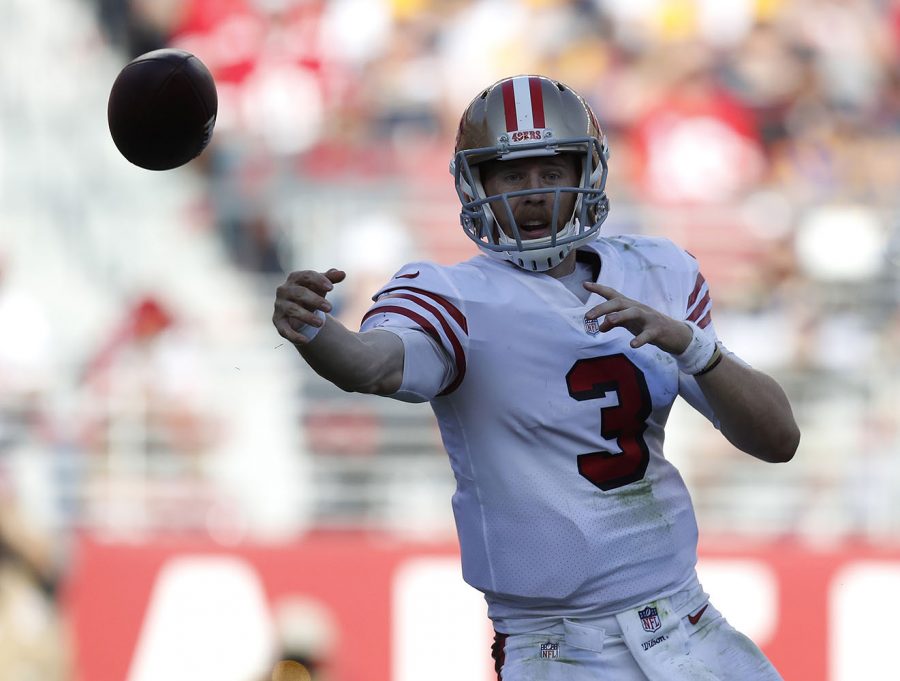 The San Francisco 49ers needed a spark in their Week 4 game, and that spark turned out to be a former Hawkeye quarterback.

Nick Mullens, San Francisco’s backup quarterback, started Sunday’s game against the Philadelphia Eagles as the team’s top signal caller as starter Jimmy Garoppolo works his way back from an injury. Mullens threw an interception late in the game, which Philadelphia returned for a touchdown.

Beathard took over for the 49ers under center with five minutes and 30 seconds remaining in the fourth quarter with the team down 25-14. The former Hawkeye QB led a scoring drive to make it a one-score game, and put the team in a position to win before the clock ran out after a failed Hail Mary attempt.

A third-round pick in the 2017 NFL Draft by San Francisco, Beathard finished his appearance on Sunday Night Football – his first game action since 2018 – with 138 passing yards and went 14-of-19 on pass attempts.

Beathard may be in line to start for the 49ers until Garoppolo is healthy. Whoever is under center for San Francisco, they will have a top tight end target to throw to.

After suffering an injury in the opening week of the NFL season, George Kittle missed two games. In Week 4, the former Iowa tight end returned to the lineup and posted one of the best performances of his career.

Kittle caught 15 passes, a career high, for 183 yards and a touchdown on Sunday, while also rushing the ball once for eight yards and providing critical blocks in San Francisco’s running game.

Beathard and Kittle weren’t the only Iowa alums that made highlights in prime time in Week 4.

Former Hawkeye linebacker Josey Jewell starts as inside linebacker for the Denver Broncos, and in a 37-28 Thursday Night Football victory over the New York Jets, he showed why.

Jewell was the highest-rated player in Thursday’s game according to Pro Football Focus, finishing with 10 tackles, a career-high two sacks, and a pass defended.

“I thought Josey played a good game,” head coach Vic Fangio told the media postgame. “We blitzed them more than usual and he came through with that and made some plays. I saw him in some good coverage situations, and we really played the run extremely well.”

The Cincinnati Bengals have placed defensive lineman Mike Daniels on injured reserve after he suffered an elbow injury in practice Oct. 1. Daniels has started two games this season for the Bengals and will be out a minimum of three weeks before he is eligible to return from injured reserve.

Former Hawkeye linebacker Christian Kirksey has also been placed on injured reserve. A starting linebacker for the Green Bay Packers, Kirksey injured his pectoral muscle in a Week 3 game against the New Orleans Saints. A return date is still unclear for the Packers’ leading tackler this season.

While Josey Jewell had a standout performance in Week 4, his teammate and fellow former Hawkeye Noah Fant suffered an ankle injury and was forced to leave the game. ESPN’s Adam Schefter reported that Fant is currently “week to week” and will likely miss Denver’s next couple of games.