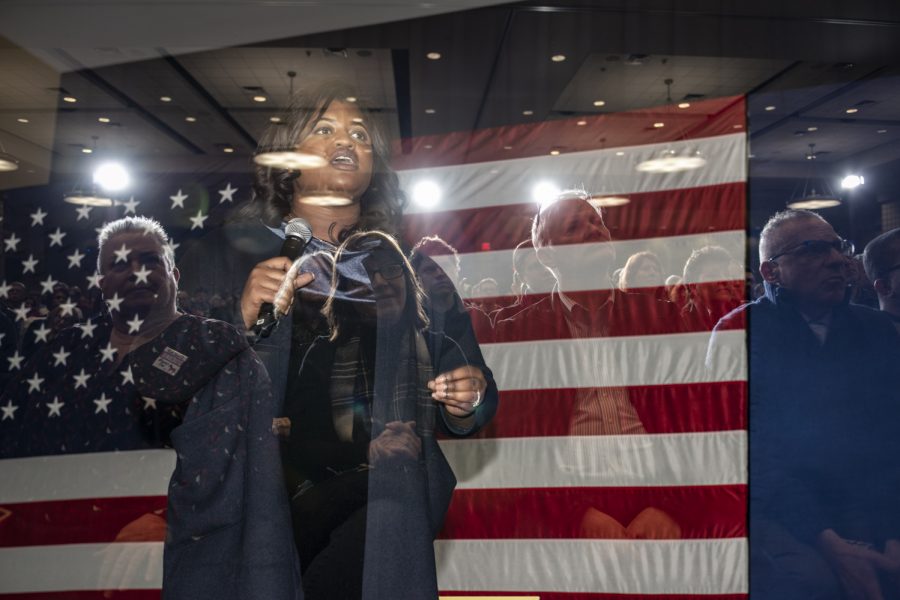 Former secretary of state candidate Deidre Dejear speaks during a town hall for Sen. Kamala Harris, D-Calif. at the Quad Cities Waterfront Convention Center in Bettendorf, Iowa on Sunday Feb. 24, 2019. Dejear was the chair of Harris' campaign in Iowa.

At what would have traditionally been a barbecue, the Johnson County Democrats held a virtual event featuring prominent Iowa and national politicians where they encouraged viewers to vote and volunteer in their areas.

Deidre DeJear, Iowa voting rights activist and 2018 candidate for Iowa secretary of state, said Johnson County is the heartbeat of Democratic politics in Iowa and needs to continue to be a guide for other counties in the state. She said that officials in Johnson County do a great job of engaging with their voters.

Johnson County is Iowa’s most Democratic county, with Democrats making up about 54 percent of active voters in the county as of September, according to the Iowa Secretary of State’s office.

“I am asking you all to not only organize your community and families but to think about who you will engage with over the next 30 days. Our democracy depends on each and everyone of us,” DeJear said.

Rita Hart, Democratic candidate for the Iowa’s 2nd Congressional District, said that with 30 days until Election Day, everyone needs to continue to work as hard as they have been. She said the attendees need to continue to educate voters about candidates and what could be done to solve problems they are seeing in their communities.

“We are all tired of division. We need to bring people together instead of distancing,” Hart said. “We all have a part to play and we need to work hard.”

As the event was online rather than in person this year, Hart reminded everyone to wear masks and social distance as they continue to listen to scientists, because while some viewers want to do what they can for the campaigns they are passionate about, she said everyone needs to be safe while doing so.

The event featured a video made by Sen. Bernie Sanders, I-Vt., that encouraged Johnson County voters to vote for Joe Biden and Theresa Greenfield. He said the 2020 election may be the most important election in history, and Iowa will be a state that makes an impact.

“It is essential for people in Iowa to show up and show up big. Everyone’s vote makes a difference,” Sanders said.

Theresa Greenfield, Democratic candidate for U.S. Senate, tried to rally support to flip the state House and Senate Democrat. She said important issues Americans care about are on the ballot in this election, and everyone needs to make a plan to vote.

“I don’t want anyone to wake up on November 4 and think that they should’ve done more. Everyone needs to make connections and flip the seats,” Greenfield said.

Greenfield said that most polls show her winning the senate seat by 2 percent, and she said she has raised three times as much money as her opponent, Joni Ernst. Greenfield raised $6 million from April to June of 2020, compared to Ernst’s $3.6 million. Numbers for the third quarter, from July to September, aren’t publicly available, so it’s unclear how much each candidate has raised. FEC reports show Ernst has raised $11.7 million between 2019 and 2020, while Greenfield has raised $11.6 million in the same time period.

Sen. Cory Booker, D-N.J., closed the event by sharing his appreciation for Iowa Democratic candidates, and emphasizing how important this election is for Iowans.

“We are all leaning on each other in what is a very difficult time. The community here in Johnson County has been really strong and important,” Booker said. “This election is our nation at a crossroads, our allies across the world are holding their breath for our results.”