To comply with the Big Ten’s protocols, Iowa’s men’s golfers have competed unattached from the UI in fall tournaments. 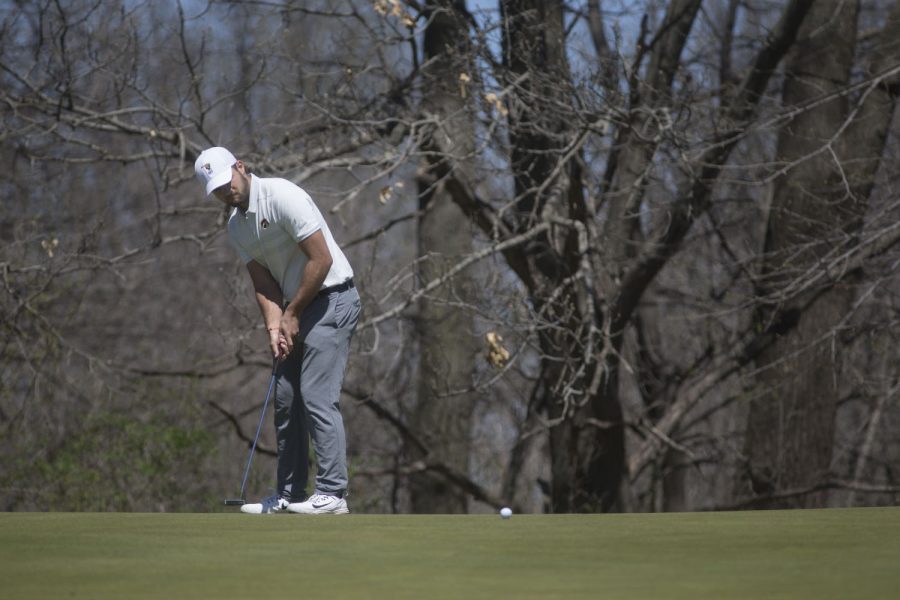 Gonzalo Leal putts during a golf invitational at Finkbine Golf Course on Saturday, April 20, 2019. Iowa came in first with a score of 593 against 12 other teams.

Over the offseason, many of Iowa’s men’s golfers participated in summer tournaments individually, whether it be state-sanctioned amateur events, amateur events run by the United States Golf Association (USGA), or even tournaments managed by the PGA TOUR.

Typically, after the conclusion of the summer season, players return to Iowa City to play the fall season as a Hawkeye team, practice in the winter, and start back up with competition in the early spring.

This year is different. With the Big Ten’s most recent decision on Sept. 16 to postpone all fall sports – with the exception of football – the men’s golf team can’t participate in tournaments under the “University of Iowa” umbrella. However, the golfers are allowed to participate as individual players that just so happen to play golf for the UI.

Competing as individuals means that Iowa can’t submit a team score to count towards the team-based tournament competitions, but players can still participate in the overall tournament and submit their own individual scores.

The Hawkeyes have burst through this loophole early in the fall competing in two tournaments as of Oct. 4, with more events on the horizon.

Last week, eight men’s golfers made their way to the Zach Johnson Invitational and while the on-course golf was virtually the same as it would be in a team competition, everything else was vastly different.

“Usually when we go and get food and stuff like that, the University pays or the athletic department pays for that,” senior Alex Schaake said. “We had to get our own hotels this week and in Minnesota. Usually, that’s not the case, we just show up and coaches have our rooms ready. The main difference is getting on a tournament routine. Our coaches [normally] have kind of a set plan for when to wake up in the morning, usually we work out in the morning before we even go play in a tournament. So, it’s just weird in that sense, being with those guys and not doing that.”

“Other than that, if you’re committed to playing good golf, then that’s the stuff you’ve got to do,” Schaake said. “Getting up early, getting a good breakfast, getting out there an hour before to warm up. For me, [the lack of a set team routine] has definitely been the biggest difference.”

Whatever the Hawkeyes did to prepare for each day of the Zach Johnson Invitational worked.

Junior Gonzalo Leal Montero won the event at 2-over-par, and five of the other seven competing Hawkeyes in the field all finished within the next ten spots on the leaderboard.

“The Zach Johnson was a good tournament,” graduate transfer Charles Jahn said, who finished 11th overall. “The field wasn’t great, if we had been competing as a team, we would’ve won by like 60 shots.”

With the team-score format, totaling the top-5 scores from a team each day, Iowa would’ve won the team competition by 45 shots.

Leal Montero was happy to win the tournament as an individual, but disappointed that the team couldn’t and still can’t compete in team-based competitions.
“It is frustrating, to be honest,” Leal Montero said. “To see these other teams, in this tournament, for example, they’re playing, they’re competing, and nothing happens, but because we’re in the Big Ten, we can’t compete this fall. It’s frustrating, we’re practicing every single day, we’re training, we’re doing everything we can, and we can’t compete as a team. It’s frustrating but we’re excited to compete again next spring.”