Current, former Hawkeyes reflect on their experience in the men’s swimming program

Junior Andrew Fierke started swimming for the Hawkeyes in 2018, and Iowa City West coach Byron Butler swam for Iowa from 2009-12. 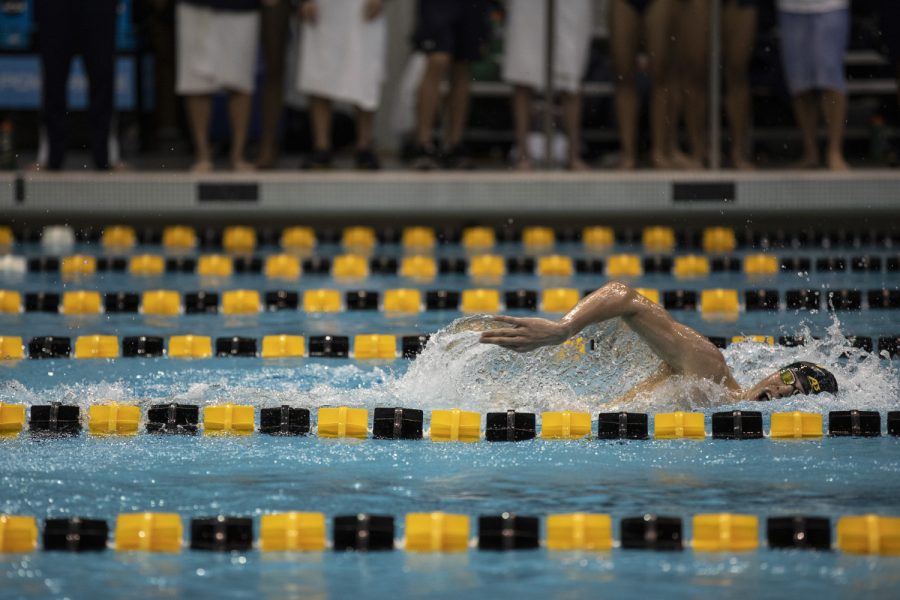 Iowa swimmer Andrew Fierke competes in the 1,000 freestyle during a swim meet at the CRWC on January 11, 2020 between Iowa, Illinois, and Notre Dame. Fierke finished 2nd in his heat with a time of 9:25.79.

Junior freestyle/breaststroke swimmer Andrew Fierke is a walk-on recruit with the Iowa swim team. A native of Fort Dodge, Iowa, he is three hours away from home. Fierke said he had an interesting recruitment process to Iowa because the program didn’t notice him until his senior year of high school.

“Compared to a lot of other people on the swim team, who were recruited like their sophomore [or] junior year, I wasn’t recruited until my senior year,” Fierke said. “I started getting the coaches’ attention, they brought me on after they saw my performance at Iowa’s high school swim state meet, and I was just adopted into the fold and I just love the atmosphere that the team gave off. They reminded me a lot of my high school team because they had jokes, they had fun, they were all a family.”

Fierke decided to come to Iowa for two big reasons — he didn’t have to leave his home state to swim collegiately, and Iowa has a great engineering program.

“I’ve gotten calls from other colleges, but it’s like, ‘You didn’t have what I was looking for,’” Fierke said. “And then Iowa called and it’s like, in-state, engineering program, swim team — kind of fit all three right there.”

Byron Butler, the head coach of boy’s and girl’s swimming at Iowa City West, swam for the Hawkeyes from 2009-12. A New Berlin, Wisconsin, native, Butler has fond memories of his time with the Hawkeyes, and stayed in the area after graduation.

“It gave me good structure in college. I worked a ton, pushed my limitations, and met tons of people — tons of friends who are still my friends today,” Butler said. “I even met my wife on the team, she was a swimmer as well.”

During his time at Iowa, Butler excelled in the 100 fly and 100 back, swimming collegiate-best times and qualifying for the U.S. Olympic Trials in those events in 2012. Butler was also part of the first Iowa swim team to use the new Campus Recreation and Wellness Center pool when it opened in 2010.

Now, the program Butler and Fierke love so dearly is being cut at Iowa at the end of the 2020-21 academic year — as announced by UI President Bruce Harreld and Athletics Director Gary Barta on Aug. 21.

Butler strongly disagrees with the cuts, and said he believes other things could have been done to save the program.

“I don’t think that it was the right decision. I don’t think that other sports should have been cut,” Butler said. “I am a firm believer that there were a lot of things that could’ve prevented it from happening, maybe at the administrative level, or maybe even on the team level.”

Despite the loss of Division I men’s swimming in the state of Iowa, Butler said he thinks boy’s swimming is still a growing sport in Iowa, and will continue to grow.

Fierke thinks that the state will lose a lot of talented swimmers, however. He said walk-on swimmers may not be able to afford out-of-state tuition, forcing them to leave the sport altogether.

Despite all the adversity and outside noise, Fierke and the Hawkeyes are determined to make the swim and dive team’s last season one for the books.