While the UI continues to offer in-person classes, thousands of students are operating entirely online already

Thousands of students either chose or fell into the category of having all-online classes. The University of Iowa is planning a similar approach for the spring semester, offering a mix of in-person, blended, and virtual class types. 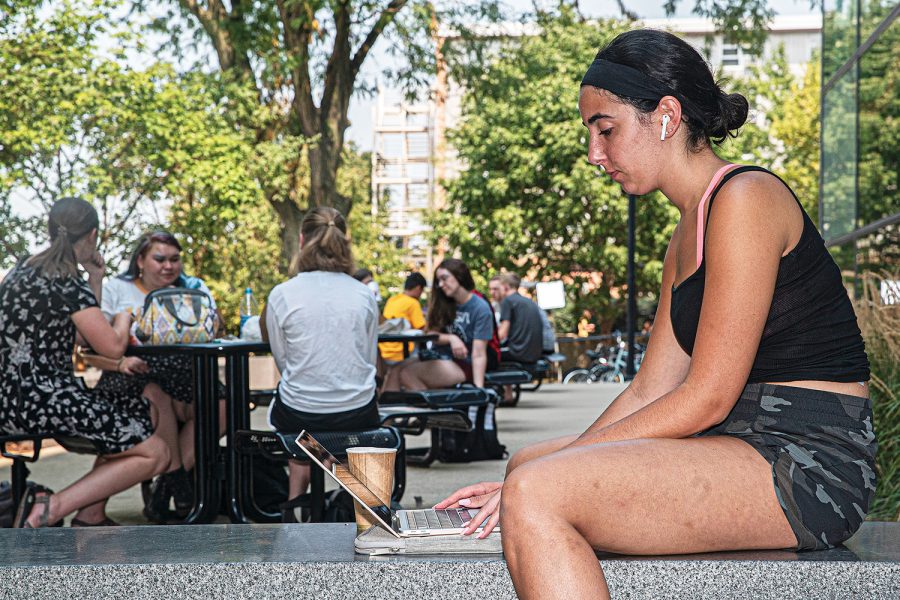 University of Iowa freshman Alexa Cohen completes work for an online class outside the Blank Honers Center on their first day of the new semester on Monday, August 24th, 2020. Despite the pandemic, campus remains open and some classes are still being held in person.

At the University of Iowa this semester, more than 2,500 undergraduate students are holding their classes all online.

As groups of students and faculty have criticized the UI’s return-to-campus plan and protested in-person classes, the university has reported more than three-quarters of undergraduate classes are already held entirely online.

Director of Media Relations for the UI Office of Strategic Communications Anne Bassett said in an email to The Daily Iowan that the UI is tracking the number of students who are not enrolled in any face-to-face or blended courses.

“This could be due to several reasons, including students who chose to build their course schedule around classes offered online, their program could have been offered online prior to COVID-19, or all of their classes were moved to online due to [the] virus,” Bassett said. “Currently, there are 210 first-year undergraduate students and 2,428 other undergraduate students who fell into this category.”

Bassett wrote that the UI has offered to support students who are medically vulnerable in the Temporary Alternative Learning Arrangement (TALA).

“Examples of these temporary arrangements include, but are not limited to, remote learning, flexible learning arrangements to decrease contact with others, usage of additional or enhanced protective equipment, or temporarily removing or modifying course content that may be less critical or incidental,” Bassett said. “For fall 2020, 362 students were approved for TALA.”

UI freshman Nikša Poleksić, who is majoring in biomedical engineering, did not apply for a TALA request because most of his classes are online already, and he didn’t want to risk receiving a different level of education than his in-person classmates.

Poleksić said he’s on campus about four times a week for one in-person course and one blended course, but the rest of his classes are entirely online. For example, the student said his chemistry discussion, which met once before switching to entirely online, seemed safer and more socially distanced than his differential equations class, which is entirely in person.

He said for his math class, the professor offered the option of virtual or in-person format. He said he chose virtual and wished he had this option for all of his classes.

“I wish I could go online and have the same quality of education as I would, in person,” Poleksić said.

Poleksić said he thinks students should have a choice in their class modality because their health is being impacted. For many of his classes, he said, he doesn’t have the option to not be in person.

“As someone who wants to go to eventually the med school, I can’t really be safe and go to class at the same time because if I don’t go to this specific class, then my grades are going to drop and eventually that’s going to impact like my GPA and it’s going to like start this chain of events that are not going to be the best for me.” Poleksić said. “But it should be up to the students.”

In an email to The Daily Iowan, Associate Provost for Undergraduate Education and Dean of the University College Tanya Uden-Holman said the UI is planning to implement similar procedures for the spring semesters as it did for classes for the fall.

“The following approach will assist with spring course planning and has been shared with colleges and departments: Collegiate leaders will discuss expectations for some face-to-face instruction where appropriate based on pedagogy and other lessons learned from the fall 2020 semester,” Uden-Holman said.

Classes with more than 50 students will be online, she said. Online, in-person, and hybrid formats for classes of less than 50 will be expected for class sections in each department.

“Modality decisions should be primarily based on pedagogy,” she said. “It is expected that this decision-making process will result in a reasonable number of in-person class sections in each college.”