Leal Montero's three-round score of two-over-par bested all challengers in the field by at least three strokes. 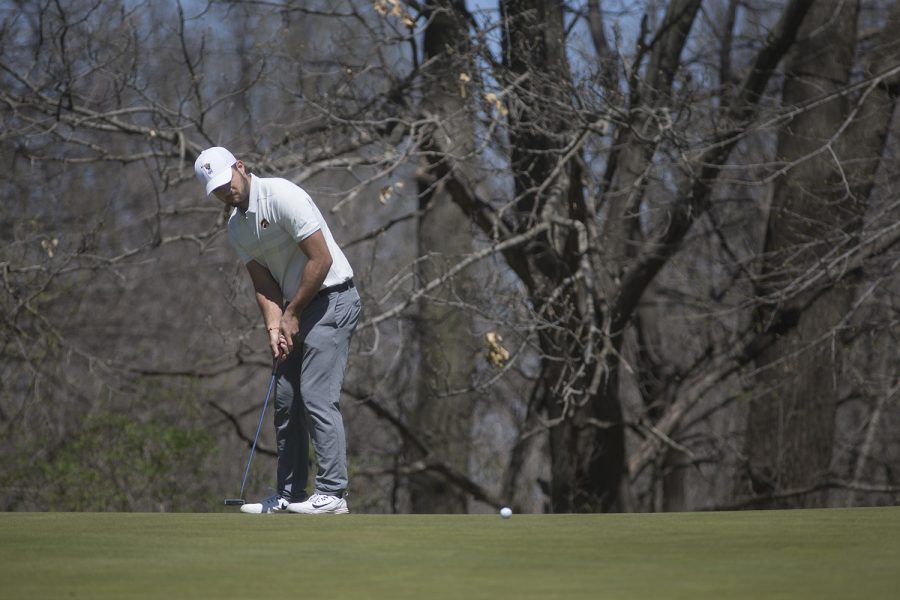 Gonzalo Leal putts during a golf invitational at Finkbine Golf Course on Saturday, April 20, 2019. Iowa came in first with a score of 593 against 12 other teams.

Named after two-time major champion and Iowa native Zach Johnson, the Zach Johnson Invitational is an annual collegiate golf tournament that hosts the best young golfers from around the area.

“The conditions were better today than yesterday, but the course was still tricky,” Leal Montero said. “I think I did a good job playing smart on some holes, not aiming to the pin but rather finding the middle of the green. Although I was a little bit off from the tee, I gave myself chances by hitting my irons well. I was aggressive when I felt I could and made some nice putts down the stretch.”

After shooting a pair of two-over-par 73s for the first two rounds of the tournament, Leal Montero turned it on, firing a two-under-par 69 on the final day of competition. He was the only golfer in the 47-man field to score under par in the final round at the 6,898-yard Glen Oaks Country Club in Des, Moines, Iowa.

Leal Montero and Schaake were paired together for the final round on Tuesday.

“It was fun to play with Alex today,” Leal Montero said. “We were pushing and supporting each other all day.”

All of the Hawkeyes competing in the tournament did so unattached from the University of Iowa and its men’s golf team. Competing as a team would’ve violated the Big Ten Conference’s restrictions on fall athletics competitions outside the sport of football.

On Aug. 11, the Big Ten announced that all fall athletics competitions would be postponed to the spring. The conference then revised that statement on Sept. 16, reinstating football but not other fall sports.

Should the Hawkeyes have had the opportunity to compete as team, they would’ve won the event. Of the eight Iowa golfers competing, seven finished in the top ten. Schaake finished third, McClear placed fourth, Jahn took fifth, Tighe claimed sixth, Weinberg tied for ninth, and Rowe finished 11th.

The overall winner of the tournament, Missouri State, had just two golfers place inside the top ten – Chris Obert and Max Kreikemeier tied for seventh.

Excluding Hawkeyes, Lim was the only golfer to shoot a single-digit, over-par number for the tournament.

It is unclear when the Hawkeyes will have the opportunity to compete as a team. While the NCAA did announce spring start dates for a number of fall sports on Sept. 23, golf was not one of them. Men’s golf plays in both the fall and spring, but is widely considered to be a spring sport.