A new mural completed this weekend on Dubuque Street depicts current events in tandem with timeless Iowa symbols with the goal of showing positive unity and revitalizing the neighborhood. 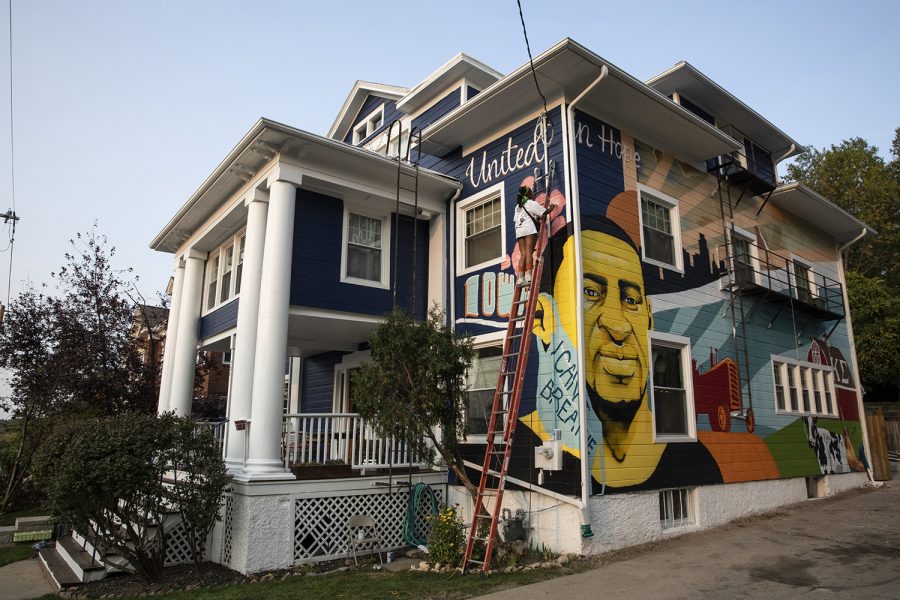 The mural entitled "Falling Upwards" fills the south side of a home on Dubuque Street in Iowa City, Iowa on Friday, September 25, 2020. The mural, painted by Defy Studios of Minneapolis was commissioned by property owner Sam Stelter, a former University of Iowa student and Kappa-Sigma Beta-Rha member, who saw the mural as an opportunity to create conversation of individual experiences and the power of community.

Tierra Armstrong was sweeping deep blue lines in the shadow of a painted chicken when an Amazon delivery driver drove through the little alley off Dubuque Street. The driver complimented the new mural, which depicts George Floyd and quintessential Iowa elements on the side of the apartment building at 720 N. Dubuque St., saying it was a good idea.

Floyd’s face, painted in Hawkeye colors and accessorized with a mask that has “I can’t breathe” written on it, dominates the corner of the building visible from Dubuque Street. Cars streamed by as Armstrong, a Miami-based artist commissioned to make the piece, worked.

One of the main messages of the mural was connection and unity, she said.

“George Floyd is a huge symbol of [unity], he kind of brought the whole world together at one point, so that’s what we’re geared towards,” Armstrong said.

Titled “Falling Upward,” the mural was officially unveiled on Sept. 26. Building owner Samuel Stelter said the mural revitalizes the neighborhood while connecting current events to his own experiences as a University of Iowa alum. According to a press release for the mural unveiling, the mural shows “rising tides raise all boats.”

“Words don’t do it justice,” Stelter said of the mural.

Stelter majored in business at the UI and lived in the then-Kappa Sigma chapter house at 716 N. Dubuque St. during the 2016-17 school year, where he first saw the then “creepy” house across the alley. He said he built a relationship with the previous owner while at the UI, and bought the property in January. A mural was always going to be a part of the renovations, he said.

“[Minneapolis artists] came in and revitalized and put energy back in where it needed to be,” Stelter said. “So that’s kind of what I wanted to do with this building.”

Armstrong said she’s created several works based around Black people and their experiences, and said she was ecstatic to come to Iowa City for the first time to paint the mural. The artist has traveled around the globe for her work, and said she enjoys going to new places and learning new narratives.

Mills said when Stelter first approached him about commissioning a mural around five months ago, they weren’t really planning to put anything political on the wall. He knew the events of spring and summer couldn’t be ignored, however, especially since both he and Stelter are from Minneapolis.

“It’s kind of a collage that represents values of everybody in the community,” Mills said.

Paintbrushes poked out of Armstrong’s neatly tied up hair as she stood on a ladder, painting faint pink lines on flowers that rested above Floyd’s head. The afternoon sun lit up the brightly colored mural, making the already eye-catching piece impossible to miss for cars passing by.

When Stelter was studying at the UI, he said he was often intrigued and inspired by downtown art, and wanted to bring some art to the area where he lived. He hopes “Falling Upward” can inspire current and future students as well, he said.

“I don’t live in Iowa City anymore, so it’s kind of my gift back to the city,” he said.