UI President Bruce Harreld and Athletic Director Gary Barta told the state Board of Regents on Wednesday that the decision to discontinue four Hawkeye sports programs at the end of the academic year remains final despite football returning this fall. 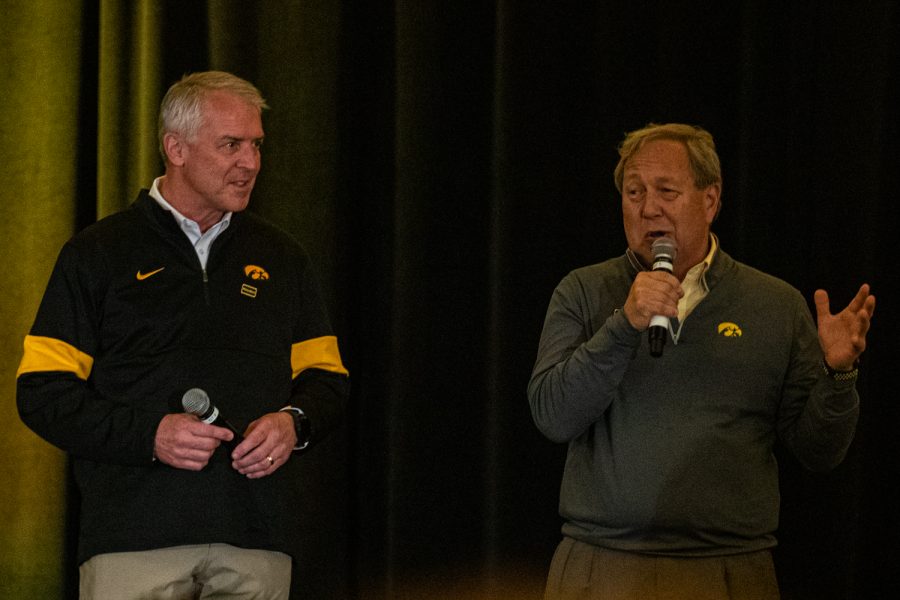 University of Iowa Athletic Director Gary Barta told the state Board of Regents in a meeting on Wednesday that the UI athletic department’s deficit is projected to be between $40-60 million, rather than the $74.7 million figure originally proposed.

The reduction to the projected deficit comes after the Big Ten Council of Presidents and Chancellors unanimously voted to start the conference’s football season on Oct. 23-24.

“Without question, that will reduce our deficit,” Barta told the nine regents. “However, the financial issues that we’re facing are still significant and the deficit will still be very large.”

The original budget proposed by UI Athletics to the regents did not account for any football revenue this fiscal year after the Big Ten originally postponed all fall sports seasons because of concerns with the COVID-19 pandemic.

Barta said Wednesday that a figure for the amount of revenue Iowa will receive by participating in up to nine conference football games this season has not been finalized. Both Barta and Harreld reiterated that it will not be enough to overturn their decision to cut four Hawkeye sports programs.

“The supporters of those four sports… came back to us and said, ‘Now that you’re playing football, will you be able to bring back these sports?’” Barta said. “And immediately we had to share with them, ‘No, the decision is final. And it’s final only because the deficit is still very, very significant.”

On Aug. 21, Barta and UI President Bruce Harreld announced in an open later that four Hawkeye sports programs — men’s and women’s swimming and diving, men’s tennis, and men’s gymnastics — would be cut following the 2020-21 academic year, citing the conference’s decision to not play football this fall.

In addition to the sport discontinuations, UI Athletics will cut or leave vacant 40 positions within the department because of its financial shortfalls. The department will also require all regular, non-contracted employees to take 15 unpaid furlough days before Dec. 31.

“It isn’t possible to bring these sports back or to take these positions and bring them all back right away or to eliminate the pays cuts we had to implement,” Barta said. “This is going to be with us for quite some time.”

Alumni and supporters of the four cut sports have created Save Iowa Sports, a group that on Monday launched a pledge-based effort to revive the programs. By Tuesday afternoon, the group reported that it had raised $1.65 million.

This amount was “just the beginning” to the group’s fundraising efforts, Save Iowa Sports said.

Barta called the fundraising effort admirable, but said it would take “20-to-30” times the $1.65 million already raised to bring back the four programs.

Harreld added: “What they are asking us to do is reinstate the sports so they can run a campaign to raise the money. I’m sorry, I’ve been there so many times on other facilities and other activities on campus — that if you do this, raise the money — then we’ll end up with 10 percent of what we need.

“And now we’re on the hook to fund the rest of it. We don’t have that sort of money anymore. These sports are closed. But if we can raise an appropriate amount of money, which is a fairly large sum of money — tens of millions of dollars — then we’ll talk about if we want to reinstate them. But it has to be in that order.”

Regent Patty Cownie told Harreld and Barta that she hoped that UI Athletics received the necessary funds to bring the four sports back.

“Yeah we do too. But that’s not going to happen. I’d love for a regent to make a motion to fund this,” Harreld said, and then paused waiting for a response. After a period of silence from the regents, he added “OK, let’s move on.”

Harreld has the final say in eliminating sports — not the regents.

“The presidents of the universities determined what sports are played at their universities,” regent Mike Richards said. “We do not specifically budget for any particular sport.”

Following the Big Ten’s decision to postpone all fall sports, Barta said he was anticipating a deficit of $60-$75 million, and that he was working on securing a $75 million loan. UI Athletics will still look to outside assistance to bridge the financial shortfall, Barta previously said, but the amount of the loan will be reduced.

The television revenue UI Athletics will receive remains under negotiation, Barta said. Assuming the games are played, they will be held with no fans in attendance by order of the Big Ten.

“Associated with that ticket revenue, we receive between $15-20 million in premium seating either through the suites, the club seats, or seat donations,”Barta said. “And we’ll be without that.”

UI Athletics’ revenue bump with football taking place is partially offset by additional COVID-19 expenses. The 14 Big Ten schools will collectively pay for daily COVID-19 tests for their football players and staff members, which Barta said will have a “significant” cost — as well as cardiac protocols for those who test positive.