Student-athletes comment on program cuts, history of sports at Iowa

Student-athletes had a chance to share their thoughts on the history of their respective sports at Iowa at a press conference Monday. 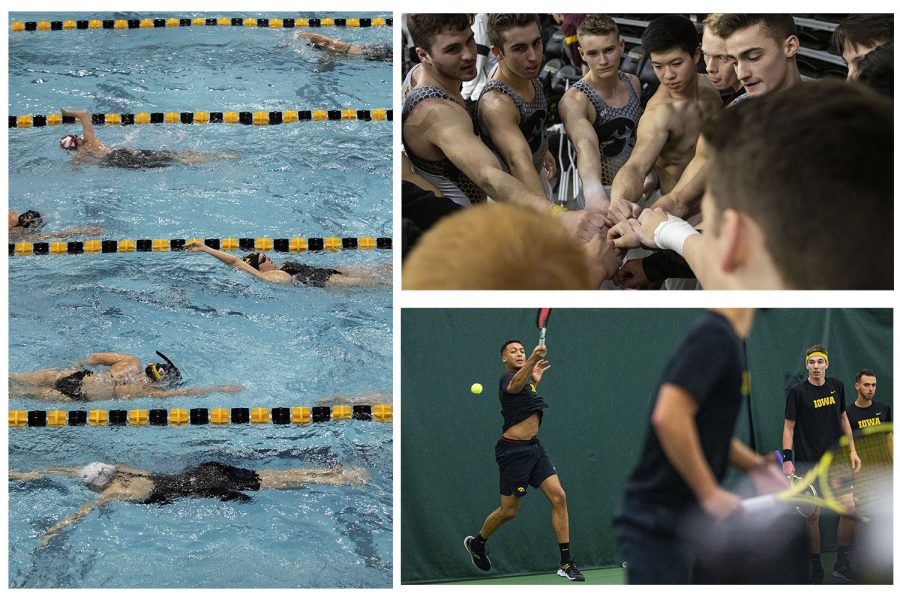 In this triptych, Women’s Swimming, Men’s Gymnastics, and Men’s Tennis are seen during their 2019-2020 season. (Daily Iowan Photo Staff)

Since University of Iowa Athletics Director Gary Barta and President Bruce Harreld announced that men’s tennis, men’s gymnastics, and men’s and women’s swimming and diving would all be discontinued at Iowa at the end of the 2020-21 academic year, debate has raged on with regard to the validity of the decision.

In a frequently-asked-questions document released in tandem with Barta and Harreld’s statement on the cuts, the administration provided the criteria it used to determine what sports got the axe.

Current and future facilities opportunities, current and future prospect for success of the sport, historical competitive success, history of the sport at Iowa, and impact on student-athlete experience across all sports, now and in the future, were just a few of the criteria listed as reasoning for the cuts.

Current and future facilities opportunities, or lack thereof, is one of the key touchstones of present debate.

Many argue that history of the sport at Iowa is another key criterion. In the case of swimming and diving, the history may be richer than that of any sport at Iowa. The program is 103 years old.

RELATED: Four Iowa sports being cut each have history that dates back decades

Former Hawkeye head coach David Armbuster and swimmer Jack Sieg also invented the Butterfly stroke at the Field House on the UI campus in the 1930s.

The history of the men’s tennis program is also deeply rooted at Iowa. The first recorded team competition took place in 1898.

“One of the pictures that came out recently was a photo of the Iowa tennis team back in the 1950s, when they were Big Ten champions,” senior Jason Kerst said. “Our outdoor courts are the Don Klotz tennis courts. Don Klotz was the coach back then. So, that photo was just a snapshot of history. Our program is over 100 years old. . . these decisions are opening the door for eroding a history that is so far beyond our university.”

The last highly contested criterion is recent success of the programs. All four teams were solid in 2019-20.