Hancher looks ahead while grappling with unknown

With cuts to funding and its doors closed to the public due to the COVID-19 pandemic, Hancher staff wrestles with what awaits them in the second act of the show. 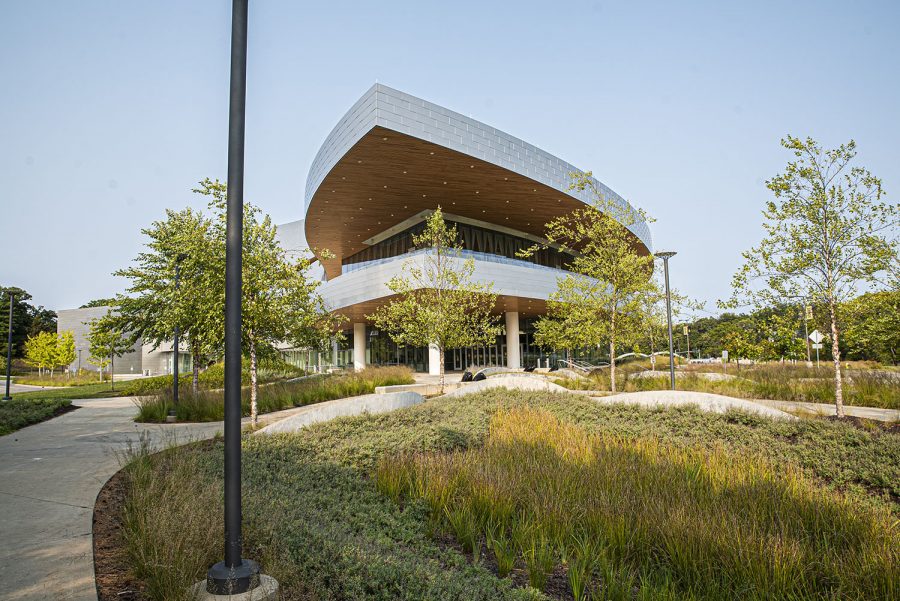 It’s a normal Friday evening at Hancher Auditorium, where University of Iowa marketing student Paris Sissel works as a house manager. The front-of-house staff arrives 45 minutes before the doors open, a briefing on the event takes place in a small, tucked away office, and some setting up is done by the ushers, all clad in emerald-and-black jackets.

The performance starts only a minute or two after 7:30 p.m. The sounds of a symphony or melodic voices of a touring musical group delight audiences and a few lucky ushers who have been assigned the role of “aisle captain.” The patrons exit the building when the performance ends, some big names or donors dawdling a few extra hours to chat, and the staff begins to clean up.

A routine such as this one has been put on hold for Hancher patrons and staff since COVID-19 swept through Iowa City in mid-March, causing the performing-arts venue to shut its doors, leaving Sissel and more than a hundred other student employees to find alternative means of income.

For Sissel, this also means missing the real-world arts-management experience her job at the auditorium provided.

“I’ve transitioned into wanting to go into arts management, so Hancher is just so important in that aspect because it’s right up that same alley,” Sissel said. “Personally, I was just sad … Hancher became a really big part of my life these last three years, I’ve made some of my best friends through Hancher.”

On the brink of celebrating its 50th anniversary in two more years, Hancher has seen – and will continue to see – several changes to its programming, funding, and operations.

The theater announced that it would cancel the remainder of its spring season just one day after Iowa Gov. Kim Reynolds declared  a  State Public Health Disaster Emergency March 17. Not only did this mean losing crowds sometimes upward of 1,500 people, it also meant that student employees could no longer work.

Hancher employs around 150 students in a typical year, said Executive Director Chuck Swanson, making it one of the larger student employers on campus.

“Our staff takes seriously the role of mentoring students who work at Hancher,” Swanson said. “We are committed to giving students opportunities to learn skills that are transferable to other jobs once they leave the university. Student success is important to us and we hear from students all the time how much they learn working at Hancher.”

Victoria McFadden, a theatre major at the UI and former usher at Hancher, said her job allowed her to experience various kinds of art forms.

“I got paid to watch theater, so that was kind of a dream, and the people who worked there were really, really great,” McFadden said.  “I made a lot of friends there.”

McFadden felt saddened when Hancher closed its doors to the public, and that the arts in general have taken such a steep hit from COVID-19.

“The arts took a hit everywhere because of the pandemic, and for people whose lives revolve around the arts, especially for work, it’s been kind of hard to cope knowing that we don’t know when it’s coming back,” she said. “I miss being in that space.”

The UI announced July 10 that it would cut its General Education Fund assistance to Hancher over the course of the next three years. The fund consists of an annual $1.5 million. According to an email to The Daily Iowan from UI Assistant Vice President for External Relations Jeneane Beck, Hancher will become self-sustaining like the Athletics Department and others on campus.

The General Education Fund from the UI pays for most full-time employee salaries, Swanson said. The funding also paid for the student assistants – who supervised the hourly students – who were also full-time staff.

Swanson said Hancher is considering several ways to create a sustainable income as its largest source of funding gradually fades away. One method is to do more, however, with less people — including student assistants.

“We have to look at everything, and our student assistantship program requires funding that we may not be able to sustain,” he said. “That is very sad to us.”

There are currently a couple of open positions at Hancher – a Community and Campus Engagement Manager and Performance Event Management Specialist – but Swanson doubts either will be filled. The university’s funding helped Hancher be what it is today, Swanson said, and while he doesn’t want to change Hancher’s mission, the performing-arts center will have to change what it does.

Changes may include renting the building, additional charges, and increased ticket prices, he said. Donations allowed Hancher to provide tickets to students for only $10, but that too may need to be reconsidered. Swanson added that the theater is trying to brainstorm ways to raise more money.

Hancher is not situated in a metropolitan area, Swanson said, so it would be incredibly difficult to host shows that run three to four weeks like Hamilton. Hancher would not make enough of a profit in the box office to sustain itself.

“As we have our work plan ahead of us, we’re going to have to really dig deep … because a million and a half to us is a lot of money — that’s a significant amount of money,” Swanson said. “But that’s an investment the university has made and that has given us the opportunity to do the things that Hancher has done.”

In addition to these changes, Swanson and Hancher Programming Director Paul Brohan have been concentrating on the theater’s fall 2020 season and how it can deliver the performing arts to Iowa City.

Brohan is working to engage audiences virtually with artists who were scheduled for this season. Most of these plans have yet to be released to the public, and Hancher has officially had just one online and free event this fall — a virtual world premiere with Step Afrika!’s latest dance project, ‘Stono,’ on Sept. 9.

“Hancher has a longstanding history of hosting artists and exploring issues that are relevant to our society and our culture,” Brohan said. “And we have a long history of heightening the issues of African Americans and Black Americans. And this is a relationship with Step Afrika! that could not be more timely and is not accidental.”

Hancher’s stages and facilities will not remain completely empty this semester, however. A week before classes started, Swanson received word that the UI Dance Department – located in Halsey Hall – was short on space to rehearse while practicing social distancing. When the department reached out to the auditorium, Swanson said he wanted to help and decided to let the dancers use the Strauss Rehearsal Hall and Hadley Stage.

“Collaboration and empathy for others are important to Hancher, so it didn’t take us long to find a way to offer spaces to our friends from the Dance Department,” Swanson said. “This makes us happy and fits well with our goal of working with students and being the largest classroom on campus.”

With changes and the unknown bright on the horizon, Swanson said he still wants Hancher to be one of the leading fine arts presenters in the U.S.

“We want to carry on what Hancher has been and I don’t want to diminish the significance of Hancher being one of the leading presenters in the country,” Swanson said. “I really want to continue that.”