Backline the key to success for Iowa women’s soccer

With three of the four starting defenders from 2019 returning, the Hawkeyes will have a backline the team can count on. 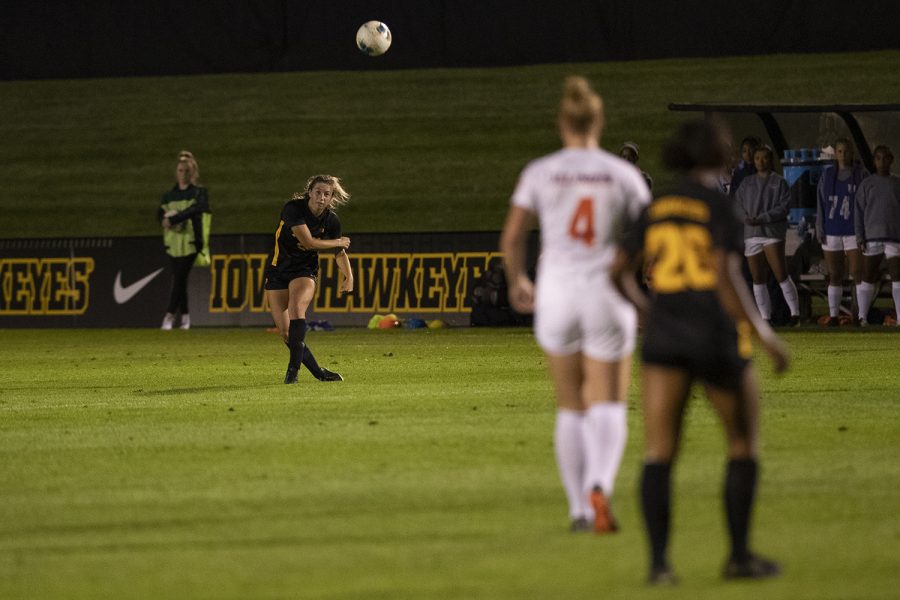 Iowa defender Riley Whitaker throws the ball during a soccer game between Iowa and Illinois on Sept. 26, 2019 at the Iowa Soccer Complex. The Hawkeyes defeated the Fighting Illini, 3-1.

It is said that defense wins championships, and if that logic is anything to live by, the Iowa women’s soccer team is in great shape to start the upcoming season.

Despite losing 13 seniors from last year’s roster, the team will return three of last year’s four starters on defense. Riley Whitaker, Samantha Cary, and Sara Wheaton all return to the back line — with outside back Hannah Drkulec having departed.

Despite being a young defense last season, Iowa kept eight clean sheets and conceded just under a goal a game. The team allowed very few shots per game as well, with opponents managing just over seven shots per game on the Iowa goal.

“None of us wanted to get beat, and we worked really well off each other,” Whitaker said.

The continuity was something that helped the team at times last year as well. Everyone continued to provide backup and worked well to communicate and cover for each other. It helped that much of the backline had played together before last season.

“Me, Sara, and Hannah had all played with each other for a couple years, so we knew each other’s strengths and weaknesses and how to best help them,” Whitaker said.

The starters remained the same throughout last year, so the chemistry of the group is only going to keep getting stronger going into the upcoming season. The team will most likely keep the four-back system intact, so now the team is looking to take things to a new level.

The Hawkeyes will have a new starting goalkeeper this season, so easing her into the starting role by giving her less shots to contend with will be important. However, the main goal for the team this season is on the other side of the field.

“Not only how can we prevent goals from going in the back of our net and doing a good job at the back and condensing that way, but as a back four, how can we contribute to our offense,” Cary said. “So how can we get our outside backs higher? How can we use our center backs to play long through balls and transition quickly from defense to offense?”

The eye for attack could help make up for a loss in attacking talent from the past season. Drkulec had five goals and two assists last season, so there will be a creative void to fill. However, a slightly more attack-minded system could help this year’s outside backs replace her offense from last year and add to the attack.

Some of the best professional teams in soccer play force the two center backs into being reliable so that the rest of the team can get forward, and that is present in the Iowa team.

“I know those players will always have my back, so in the attack that gives me the mindset that I can go forward and be tricky and I can try those things knowing that I have a dependable backline that will always be there to clean up my mess,” Rydberg said.