Students said they are frustrated with the University of Iowa’s current testing guidelines, which only allow for currently symptomatic students to be tested. Students who have come into contact with someone who has COVID-19 must quarantine for 10 day before getting a test. 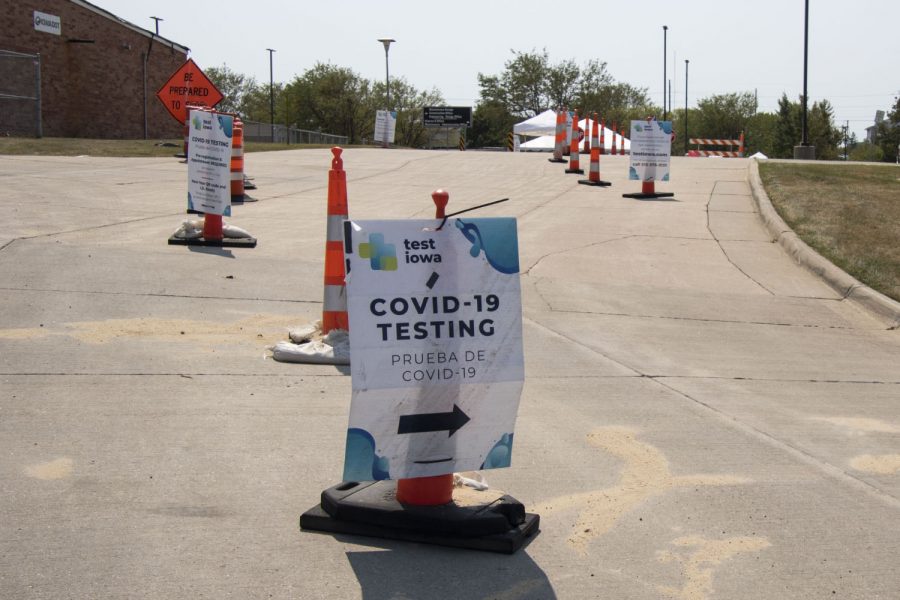 Some University of Iowa students who have self-reported having COVID-19 symptoms or reported being around someone with the virus say they have been unable to schedule tests and are left unsure of what to do next.

“This fluctuates depending on demand and the spread of the virus in our community. It has been between 100 and 500 per day,” Natvig said in an email to The Daily Iowan.

UI Campus Health Officer Daniel Fick said that the UI bases its COVID-19 mitigation decisions from the Centers for Disease Control and Prevention guidelines from June 30. It also follows the Iowa Department of Public Health, the Johnson County Public Health, and the American College Health Association’s suggestions, as well.

Fick said that the UI recommends that students who think that they have been exposed but are not experiencing symptoms should be quarantined for 10 days before getting administered a COVID-19 test.

“After exposure, it can take up to 14 days to develop enough virus to test positive. Testing too soon can result in an inaccurate result. Known close contacts must quarantine regardless of a negative test result,” Fick said.

He said that the UI only tests symptomatic students or students who have been in close contact with people who have the virus because administered mass testing can result in damaged or inconclusive results and excessive false negatives.

“One-time testing only provides data for a specific point in time and can miss cases in the early stages of infection, giving students a false sense of security… [it] requires significant resources, including trained staff to conduct the tests, personal protective equipment, and physical space for conducting testing safely and ensuring privacy,” Fick said.

After coming in close contact with one of his peers who tested positive for COVID-19, UI freshman Will Luebke said he was directed to call the Student Health Nurseline. Luebke said that he wasn’t experiencing any symptoms of COVID-19, so he was suggested to self-isolate for 10 days in place of taking a test and wait for symptoms to develop.

“[The Student Health nurseline] number was super busy and it took five different calls to talk to somebody. They told me that they wouldn’t test me, and I had to stay in my room for 10 days and if I had symptoms to call them back,” he said.

Luebke said he was frustrated that student athletes had received tests on a weekly basis while he struggled to schedule a test when he said he felt he needed one.

“I heard that all of the UI athletes get tested every week, and here I am paying full tuition and I can’t even get a test when I actually need one,” Luebke said.

UIHC tests patients that are exhibiting symptoms and people who have been identified as a close contact of someone who has tested positive for COVID-19, Fick said.

He said the CDC defines close contact if you were within six feet of someone who has COVID-19 for a total of 15 minutes or more. Other possible situations of close contact that would qualify a student to get tested at the UI are:

You provided care at home to someone who is sick with COVID-19.
You had direct physical contact with the person (hugged or kissed them).
You shared eating or drinking utensils.
They sneezed, coughed, or somehow got respiratory droplets on you.

When Luebke came into close contact with his friend who tested positive for COVID-19, he said that he had no way of getting anywhere else to get tested.

Many UI students get tested for COVID-19 at Test Iowa, which is a testing program facilitated through the state.

“All of our tests are drive up sites. Clinic sites are open to anyone to get tested, you just need to fill out the assessment and get a QR code, etc. There’s no criteria on symptoms, Office of the Governor of Iowa Communications Director Pat Garrett said.

“What we’ve done is we’ve provided them test kits and the ability to get their students through the system,” Garrett said. “We’ve only provided so many tests to each university and so it’s up to the university to administer what their criteria is.”

“We rely on our students, faculty, and staff to provide accurate information about their health and any potential symptoms to their provider in order to ensure those who most need to be tested are able to be tested in a timely manner,” Beck said.

Another freshman at the UI, Maddison Smith, said she had contacted the Student Health Nurseline after being listed as a close contact by a friend when she was out of town during Labor Day weekend. Smith said that UIHC asked her to quarantine for 14 days. Smith said she was denied a test at UI Student Health and decided to get tested at a Test Iowa site in Davenport instead.

“I had no problems going back to Iowa City to get tested because I heard that it was what you were supposed to do,” Smith said. “I told them that I was quarantining in the dorm, and someone from [the UI] called me and wanted to clarify that I was at home in isolation. I asked them if I could set up a test and they said that I need to call the nurseline.”

Smith said she’s in the process of moving out of her residence hall after her experience with UI’s COVID-19 testing efforts.

“I am pretty frustrated with the university’s efforts — I really wish that all instruction was online,” Smith said. I thought that being in the dorms was going to be a worthwhile investment.