After excelling in their two years together on the cross country and track and field teams in high school, Brooke and Jessica are now both Hawkeyes. 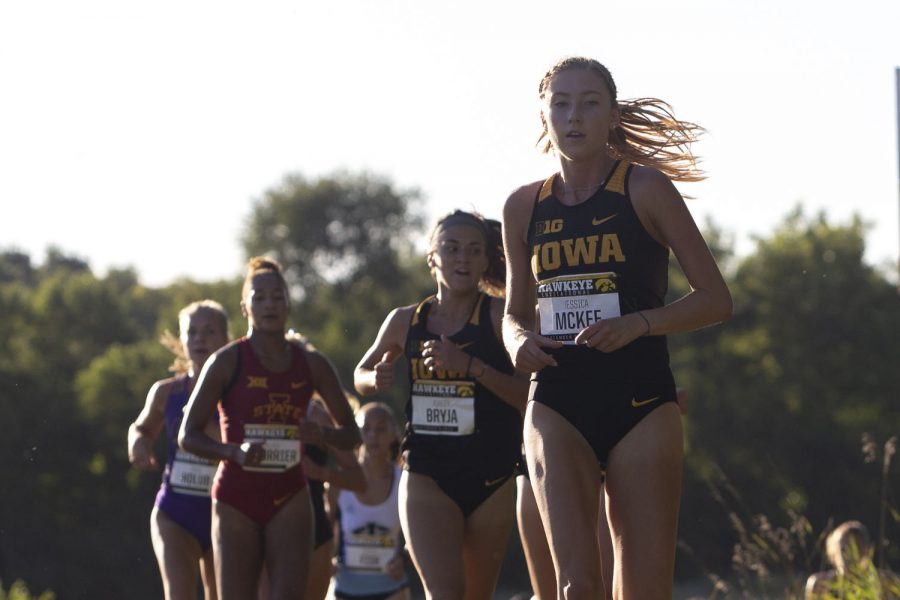 The University of Iowa’s Jessica McKee leads a pack of runners during the Hawkeye Invitational on Friday, Sept. 6, 2019 at the Ashton Cross Country Course. The Hawkeyes prevailed over six other teams to win first place overall in the men’s and women’s races. McKee finished in 20th place with a time of 14:53.

When freshman Brooke McKee starts competing at Iowa, she looks forward to doing a stretching routine that she hasn’t done with her sister since her sophomore year of high school.

Before races with her sister – junior Jessica McKee – she does an arm stretching routine where she needs another person.

Both sisters are on the cross country and track and field teams, and they couldn’t be happier to be together again after competing for two years on the same teams at Johnston High School in Iowa.

“So far, it’s been a blast,” Brooke said. “She gives me rides everywhere so it’s been super nice being a freshman and having to walk everywhere and then having her with me. But she’s also been able to clarify things that I’m not quite sure of as a freshman and she’s definitely helped make it so there’s not really a gap between all of the grades and I feel like that helps build the team chemistry a little bit more.”

They also had success in track and field. Jessica placed second at state in the 3,000m in 2017. She finished third in 2018, with her younger sister finishing directly behind her.

There is a favorite race that Jessica has when participating with her sister.

“But really, we were just giving it to each other so one person would work for a lap, and the other person could just sit back and hold on to him.”

Associate head cross country/assistant track and field coach Randy Hasenbank said that during the recruiting process, the team found out they’re wonderful young ladies. Jessica has a caring personality and Brooke has a vocal and funny one. Hasenbank said that they both have very good range.

The Hawkeyes are not currently preparing for a cross country season because there foreseeably won’t be one this fall. They are instead preparing for an indoor and outdoor track and field season. He said that Brooke will probably run the 1,500 and 5K, while Jessica is probably going to run the 5K and 10K.

“They want the best for their daughters,” Hasenbank said. “Mr. And Mrs. McKee, they’re big Iowa Hawkeye fans and have been supportive and they’re at just about every event and you can just know that it’s a close family and they love their girls, and they love to support the Hawkeyes. Just enjoyable to have them part of our program.”

Brooke is currently recovering from a nagging injury that she had previously been running through. Jessica got hurt in the middle of last her cross country season, but she’s since gotten back up and is almost back to where she was last year.

“I think we’ll savor the time we have now,” Jessica said. “And hopefully, maybe I’ll stick around for a fifth year and we can get as many years together as possible.”