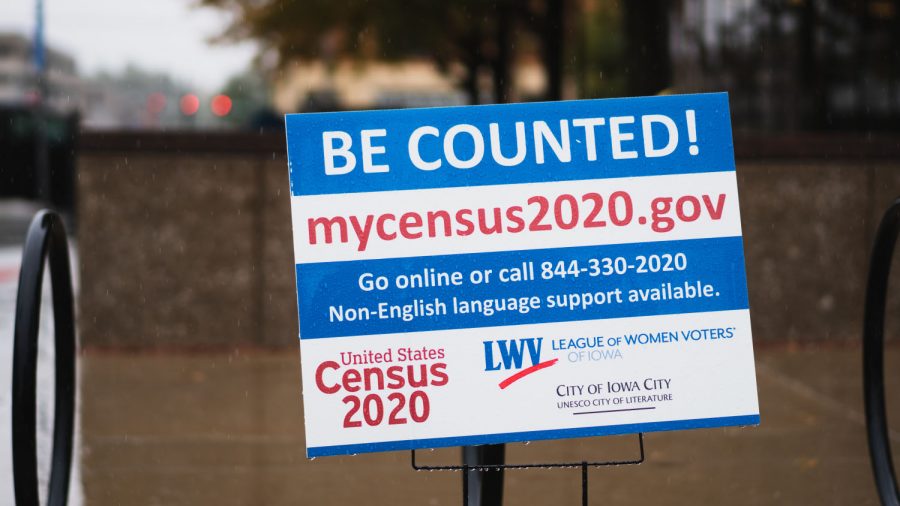 A census awareness lawn sign during a rainy day in front of the U.S. Department of Veterans Affairs building on Thursday Sept. 10, 2020. COVID-19 has made collecting the census a harder task than in previous years so this sign promotes taking the census online.

The COVID-19 pandemic has, in many ways, turned the 2020 census upside down. From delays to safety concerns to response rate deficits, the outlook of the census, the data of which billions of dollars of funding allocations is based on, has been shaken.

Al Fontenot, the bureau’s top official warned in a court filing Friday that the U.S. Census Bureau faced significant risks to completing the count by the Sept. 30 deadline.

Partnership Coordinator at the Census Bureau Samuel Fettig said the census’ fundamental mission remains — count everyone once, only once, and in the right place.

The census occurs once a decade, beginning early in the year with self-reporting online, mail-in reports, and check-in by door-to-door census takers. Residents should report to the census where they were living on April 1.

The Census Bureau was forced to put a hold on operations due to COVID-19 precautions. As a result, operations for the census were significantly delayed, Fettig said.

“When the pandemic hit in March, the Census Bureau kind of scaled back temporarily and put a freeze on those in-person field operations until we could find a way to do them safely,” Fettig said.

This freeze set the bureau back months, he added, as data collection was supposed to have ended in July.

“Our field work where our census takers go door-to-door, for example, was originally going to have started back in May— that started in August instead,” Fettig said.

Such delays have greatly impacted the bureau’s ability to complete the census on time. Fontenot said in Friday’s filing that it is unlikely the Census Bureau will have all states sufficiently counted by the Sept. 30 deadline.

“We are, however, facing significant risks to complete all states by [Sept. 30], due to factors beyond the Census Bureau’s control, such as wildfires in the western part of our country, major storms, resurgence of COVID-19 restrictions and other similar disruptions,” the statement said.

Coping with delays and restrictions, Fettig said census takers are out in the field now to follow up with those that have not completed the census. They have been equipped with personal protective equipment and social distance training to fight against the pandemic, he said.

“Census takers are trained to follow public health and safety protocols, which require: wearing of face masks, maintaining social distance of 6 feet or more, practicing hand hygiene, not entering homes, and conducting interviews outside as much as possible,” Census Bureau Media Specialist Maureen Schriner wrote in an email to The Daily Iowan.

There are concerns not only with delays, but with a major decrease in response rates for the 2020 census. Fettig said the effects of derecho and a pandemic have moved the census down on people’s list of priorities.

“What we are looking at currently is a deficit from what [response rates] had been in past years at this time,” Assistant City Manager of Iowa City Ashley Monroe said.

Monroe said Johnson County currently has a total self-response rate of 71.6 percent. Some areas of Johnson County, however, that saw 55 percent respond at this time in 2010, are responding at just 30 percent now in 2020, she said.

Fettig said responding to the census is crucial because it ensures federal funding, political representation, and access to services people rely on.

“Over $675 billion in federal funding is distributed every year based on census data,” Fettig said. “When we talk about something like a pandemic or an emergency response, census data is looked at.”