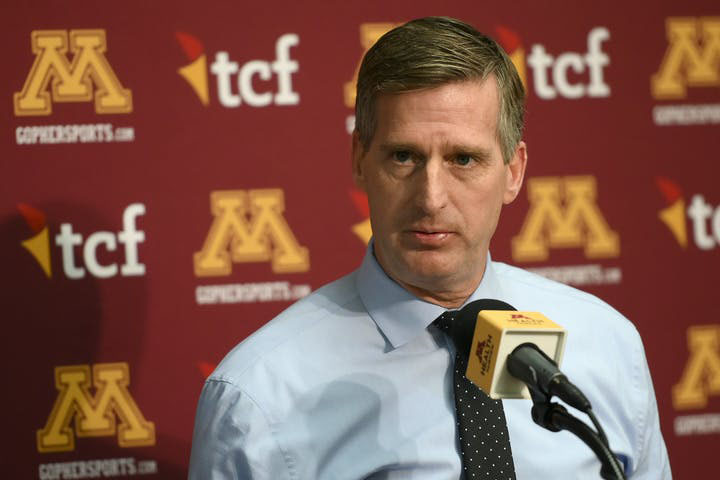 The letter states that because of the COVID-19 pandemic and the Big Ten’s decision to postpone fall sports, the athletic department is facing a projected loss of revenue of approximately $75 million this fiscal year.

“As a result, we have determined that athletics is no longer able to financially or equitably sustain 25 varsity programs,” the letter reads.

This decision is still pending the approval of the Minnesota state Board of Regents.

These teams will have the opportunity to compete in their respective seasons in 2020-21, if they take place amid the pandemic. Minnesota will honor all existing scholarships for individuals who choose to complete their undergraduate degree, and provide access to academic advising, sports psychology, and necessary access to athletic medicine. The school will also assist any athlete who decides to transfer and will support them through the transition process, according to the letter.

The letter cites finances, gender equity commitments, community impact, local and national interest, competitiveness, and sport sponsorship at the Big Ten and NCAA Division I level as factors when making this decision.

“We understand that this is devastating news for impacted student-athletes, coaches and staff,” the letter reads. “We also recognize the ripple effect this decision will have on all of our student-athletes and on former letterwinners, alumni, donors, family, friends, and fans who have participated on and cheered for these four programs over the years. We did not make this decision lightly.”

Minnesota is now the second Big Ten school to cut sports because of financial shortfalls caused by the COVID-19 pandemic. University of Iowa President Bruce Harreld and Athletic Director Gary Barta announced in a similar open letter on Aug. 21 that the Hawkeye men’s and women’s swimming and diving and men’s tennis and gymnastics programs would be discontinued at the end of the 2020-21 academic year.

In addition to cutting four sports, Minnesota also announced that it implementing a personnel cost-reduction plan for the athletics department. The school had previously implemented a furlough and pay-reduction plan, which members of the athletic department already participated in. Most academic professional and administrative employees will be subject to a 10 percent reduction in appointment, while civil service and labor represented employees will be furloughed for 17 days.

These impacts, the letter states, will continue for the remainder of the fiscal year. Employees who make $40,000 or less will not be impacted.

Minnesota’s athletic department is also eliminating eight positions in addition to those that will be eliminated because of program discontinuation. The department said it anticipates a savings of $1.3 million this fiscal year related to its personnel cost-reduction plan. Coyle and six Minnesota coaches voluntary took 10 percent salary cuts earlier this year. That reduction will now be extended through the entire fiscal year and will result in a savings of an additional $1.2 million.