Local businesses feeling the effects of no Iowa football games

After seven months of financial burden caused by the COVID-19 pandemic, Iowa City business face another hurdle: no Hawkeye fans coming to town for football games. 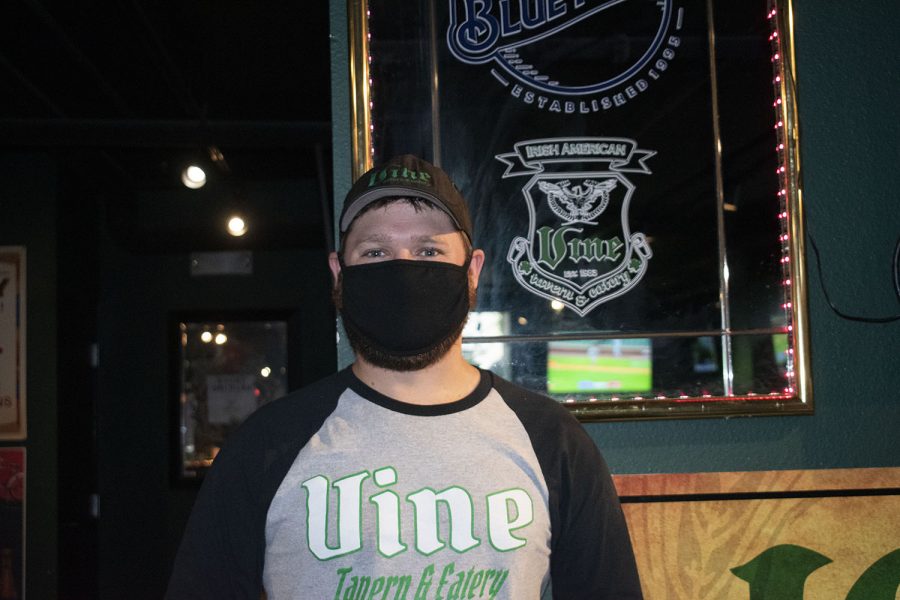 Brock Dixon, the General Manager of the Iowa City Vine, is seen on Tuesday September 8, 2020.

On Aug. 11, The Big Ten Conference confirmed what sports fans across the country had feared for months. Fall athletics, including football, would be postponed because of COVID-19.

The small businesses that are the heart of the Iowa City culture and economy have been bruised and battered by the pandemic. They have and are losing revenue, furloughing or laying off employees, pivoting business models, and relying on government programs and in order to stay afloat. After months of financial hardship, losing football and the business it brings was the last thing small business owners wanted to hear.

“We will definitely see a loss of business, and it’s unprecedented because there has never been a loss of football that I can remember at least,” said Brock Dixon, the general manager of Vine Tavern and Eatery in Iowa City. “With this whole COVID-19 thing, everyone is already running on empty right now, and we’re not sure if we are going to get that next boom or that next football intake.”

The impact of Iowa football on the area is no small matter. A 2014 study done by the Iowa City/Coralville Area Convention and Visitors Bureau found that a seven-game home schedule of Iowa football brings in more than $110 million to Johnson County.

“Vine would usually be packed and sell out every table with people still wanting to come in, and we wouldn’t have space for them until after the game,” Dixon said. “If there is no in-town game that people are traveling to then that number is going to go way down.”

After already dealing with massive losses from the early stages of the coronavirus pandemic, the many hotels of Iowa City are potentially facing the biggest hit from the loss of athletics this fall.

According to Think Iowa City, the demand for hotel rooms in Johnson County for July was down 26 percent from the previous year. In April — when the pandemic was at its worst for the hospitality industry — demand was down 70 percent from its 2019 figure, a loss of about 37,700 rooms sold. Considering Think Iowa City’s average price for a Johnson County room is $68.33, that is a loss of over $2.5 million dollars for area hotels.

“Our occupancy rates for hotels in September, October, and November of each year is around 60 to 70 percent,” said Nick Pfeiffer, Think Iowa City vice president of marketing and communications. “In January, February, and March, that number is normally around 50 percent, so there is definitely a swing of about 10 percent during the football months in a normal year.”

Angela Harrington is the owner of the newly renovated and renamed Highlander Hotel in Iowa City. With its 57-year history before Harrington took the reins last December, the hotel has been one of Iowa City’s most iconic places to stay.

“Even in its most distressing days before I bought it, the hotel would sell out,” Harrington said. “Even though it ranked dead last on Tripadvisor for Iowa City hotels, it would sell out every Iowa football game.”

Prior to the season being postponed, when the Big Ten announced the conference’s football schedule on Aug. 5, Harrington said that the Highlander quickly sold out rooms for all five home games.

Iowa Athletic Director Gary Barta announced the next day that the capacity at Kinnick Stadium would be reduced to approximately 10,000 to 15,000 seats per game.

“There was this brief time where it was thought that they would play games with [limited] fans in the stands, and while that was the thought, we had no cancellations,” Harrington said. “People were going to come to have fun at the hotel, watch the game on TV, and be in Iowa City to celebrate football even if they couldn’t be in the stands or tailgate at the stadium.”

Harrington said that they called all of the parties who made reservations to make sure they still wanted to keep them even if no fans would be allowed in the stadium. The excitement of Iowa football fans to be in Iowa City, whether in Kinnick or not, had not hindered. They all were still going to come.

Now with the season postponed, everyone who made a reservation at the Highlander hotel for those football weekends has canceled.

The Iowa City Area Business Partnership did a survey in mid-August of its member businesses about their financial confidence. Of the 120 businesses that responded to their survey, five percent stated that they were considering closing, and 66 percent reported that they have already experienced a decrease in sales ranging from 1-50 percent.

It also asked businesses what they were most concerned about this fall, and the most common responses were concerns about the UI having to close and what will happen without football.

While the loss of fall athletics is frustrating for business owners, both Harrington and Dixon said they understand why the Big Ten chose this path and are happy that student-athlete safety has been made the top priority.

“That is what is so challenging for these business owners is that lives vs livelihood thing,” said Kim Casko, president and CEO of the Iowa City Area Business Partnership. “Businesses want to keep their employees healthy and keep their customers safe, but they also want to keep their businesses afloat and it’s hard balancing those two things.”

Iowa City nighttime mayor, Joe Reilly, said the disappointment for him stems from the loss of new and diverse travelers that would get to experience the unique atmosphere of downtown Iowa City when they come to see the Hawkeyes play.

“It definitely changes the vibe of downtown, and you know on a Friday night we don’t have the marching band going through and Saturdays are different too,” Reilly said. “There will not be so much of a mix of visitors this fall because you would have alumni who pick a game, fans from traveling Big Ten schools, and I think we in the downtown district have something unique to offer because it is such a small, compact walkable area with so many things to do.”

Small business owners across Iowa City have shown perseverance through uncertain times that has never been seen before.

However, with the loss of a huge driver of the Johnson County economy, it is only becoming harder for these owners to get by. Without more government aid, the future for many small businesses remains unclear.

“For businesses like mine and restaurants who saw a 95 percent decline in revenue from one month to the next, [government programs] only made it possible for those businesses to go 90 days,” Harrington said. “If there is not another relief bill, you are looking at the landscape of Iowa, especially independent, small businesses, changing forever.”