Danita Brown and Sarah Schade started their managerial roles last season and have loved it ever since. 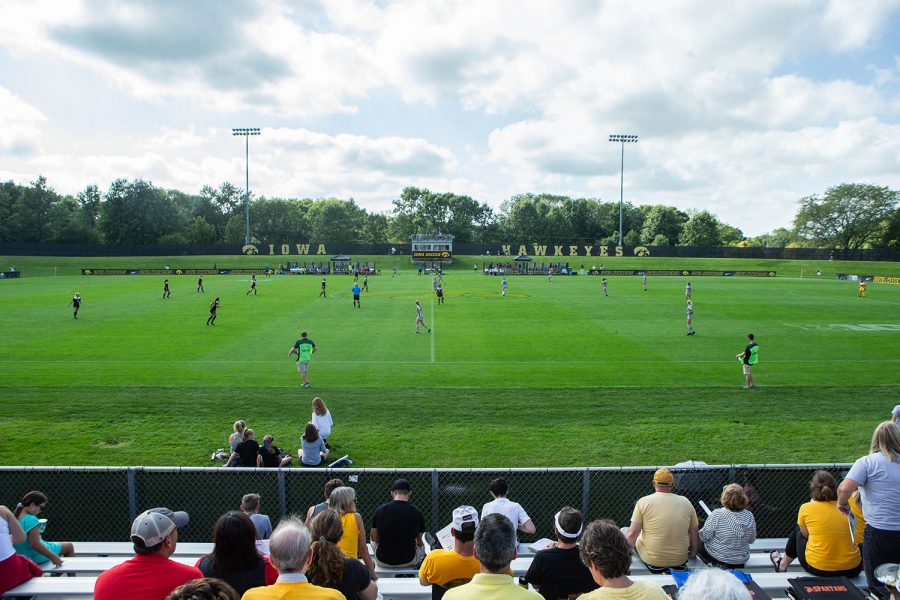 There are always people on a team that make a difference behind the scenes.

For the Iowa soccer team, those people are its two managers– Danita Brown and Sarah Schade.

They started being managers last season. The pair assists the team in whatever way they can, such as getting to practice an hour early to help set up equipment and making practices run smoothly. Ordering food and giving a hand in laundry services are also part of their responsibilities.

“They do everything really,” head coach Dave DiIanni said. “They’re so selfless in serving the group and the coaching staff. I think everyone involved in the program has such an appreciation for Danita and Sarah and what they bring and what they do for us and [it] makes our lives easier.”

During practices and games, the managers have different responsibilities. Brown films, while Schade makes sure the connection between the heart-rate monitors the players wear and the computer works. Those monitors help track the players’ workloads, which helps the coaching staff make key decisions.

Last season, Schade live tweeted all the away games. She also sometimes does Instagram stories and works with director of soccer operations Stephanie Burak on social media.

Schade reached out to Burak originally to see what opportunities the team had in social media, which led to Schade meeting assistant coach Katelyn Longino and getting this role.

The experience Schade is getting relates to a future goal of hers. A senior majoring in communication studies and sport studies with a certificate in writing, it’s her aspiration to work for a National Women’s Soccer League (NWSL) team in social-media marketing.

“If I can’t get one with an NWSL team, like any other women’s sport because I think that I’ve been quite passionate about the wage gap that exists between men and women athletes,” Schade said. “And so ideally, at the end of my hopefully long career in women’s sports that there’s …  sort of change so that the wage gap doesn’t exist anymore or is smaller.

“Right now, as a 22-year-old, I think social media is the best way for me to be able to get word out there about games and opportunities for upcoming women athletes.”

Brown, a junior majoring in sport and recreation management, got this role after meeting DiIanni during a class. She also has a goal of working in the NWSL.

Unlike Schade, Brown eventually wants to go into coaching, so she pays close attention during practices. But first, she said she wants to get a foot in the door and get a job straight out of college.

“I think having the connection with the college coaches and having this experience as equipment manager and time management and working with the team — I think they’ve adjusted to really good life skills that will translate into a work environment with a professional team,” Brown said.

At the end of the day, the managers’ job is to serve the team, and they know they’re appreciated by the players for just that.

“The players are awesome,” Schade said. “It’s really great to get to know all of them and the coaches are awesome and they’re really helpful if we have questions or stuff like that. It’s awesome. I love it.”