Matt Whitaker and other Trump campaign surrogates spoke about police and mail-in voting at a rally on Thursday. 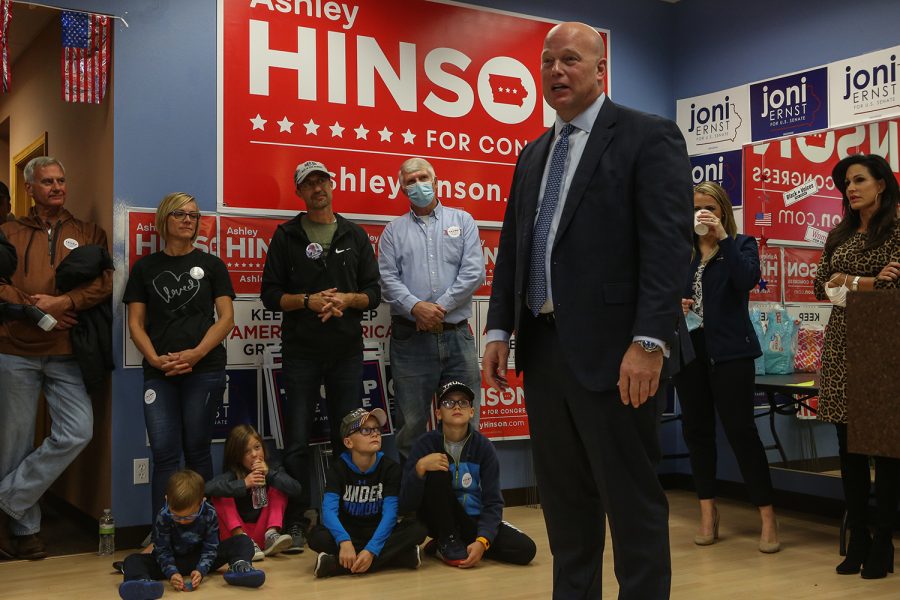 Whitaker, a Hawkeye football and University of Iowa law school alum, spoke on the recent Black Lives Matter protests happening in Iowa City, and said that law enforcement is preventing violence in the protests.

“I see what’s happening in Iowa City, what’s happening with protests and chaos and confrontation,” Whitaker said. “If you don’t think that can come to every city in America, it can. It’s very easy, these forces of anarchy that are funded by groups on the left are coming to every city that they possibly can.”

Protests for racial justice have become a common occurrence in Iowa City since the Black Lives Matter movement gained national attention in June. Protests in Iowa City have remained mostly peaceful since beginning in June.

The footage was released Sept. 3, and a California-based firm will conduct an independent review of the Iowa City Police Department’s role in the incident.

Whitaker said increased public critique of police began under the Obama administration, and that now, police chiefs in major cities across the nation are stepping down because they aren’t receiving adequate support from political leaders.

“When I was acting attorney general, one of the great opportunities I had was to speak to the men and women in blue,” Whitaker said. “And I always concluded every remark I had with the following statement: we have your back and you have our thanks.”

National Trump campaign communications director Erin Perrine said during the rally that Trump has broad support in Iowa and she thinks Trump will win the state, but that it was important that voters continue to make calls and knock on doors in support of the campaign.

Polling in Iowa has shown a tight race, with several recent polls giving Trump a slight lead. The FiveThirtyEight polling average in Iowa shows Trump up by 1.6 points, with 46.9 percent support to Joe Biden’s 45.3 percent.

Perrine also criticized some of Biden’s policies on trade with China, saying that he’s favored trade policies that benefit China over the United States.

“Joe Biden’s been more worried about making sure that China gets their opportunity to have better trade deals,” Perrine said. They get to be in the World Trade Organization. He said a rising China is a good thing… that’s not how it works.”

Few people at the event in the Cedar Rapids campaign office, which was part of a statewide bus tour, were wearing masks. The tour drew fire from the Iowa Democratic Party.

“Not only is a Trump campaign bus tour incredibly dangerous as coronavirus cases in Iowa continue to spike and we remain a nationwide hotspot for virus spread, but it’s a slap in the face to the 70,000 Iowans who’ve gotten sick from COVID-19,” Iowa Democratic Party Chair Mark Smith said in a statement on Wednesday.

On board a Trump campaign tour bus before the rally, national chairman of the American Conservative Union Matt Schlapp said people should vote however they feel most comfortable, whether that be in person or mail-in voting. He said he takes issue with states altering laws on mail-in voting a few months out from the election, and that there shouldn’t be any reason to change those laws because absentee and early voting have existed for a while now.

“I’m someone who spent 36 days in the Florida recount,” Schlapp said, referencing the recount in the state following the 2000 presidential election. “And the problem with a close election is that it comes down to the subjective interpretation of the canvassing committee on those ballots, and so you want to make voting the least subjective possible.”

Trump supporter Lyle Broer, who was in attendance, said he enjoyed the rally and that Trump’s policies align with his own views more so than Biden’s.

“I cannot understand why anybody thinks socialism is the way we want America to be,” Broer said. “It has been tried before and it has failed. We need capitalism and that’s the guy [Trump] to go to, not Biden.”

Trump has routinely characterized Biden as a socialist and a radical, but Biden has pushed back against those accusations.

“Ask yourself: Do I look like a radical socialist with a soft spot for rioters? Really?” he said at a campaign event in Pittsburgh in August.

“If you blanket-mail ballots to everybody, you have no idea whether they’re eligible voters or not,” Hayes said. “But if you have someone request it, you can confirm that they are an eligible voter and they should be sent a ballot, and I think that’s the only way to do it right and do it fair.”