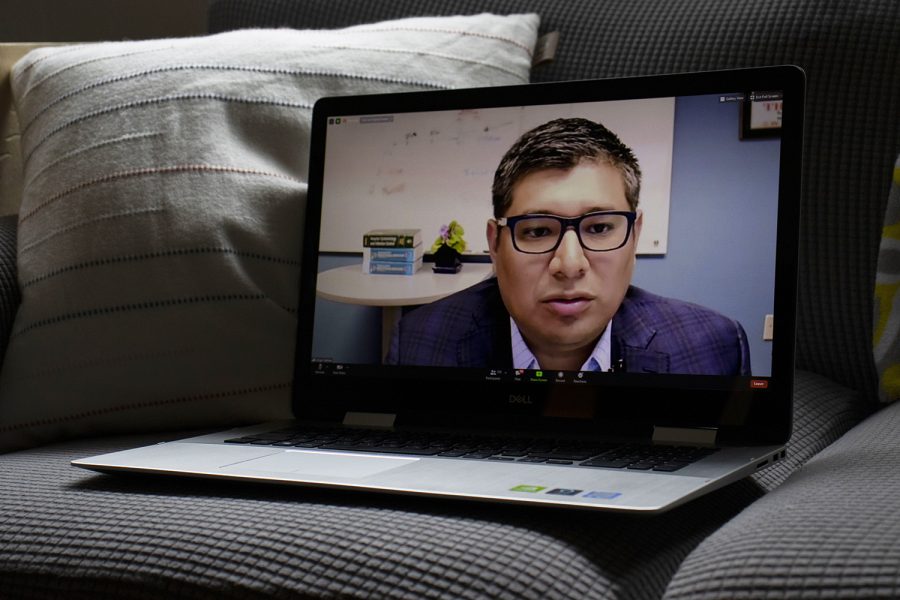 Epidemiologist at the Carver College of Medicine, Jorge Salinas, MD, speaks during a special session of the UI Faculty Senate meeting on Wednesday, Sept. 9, 2020. Senate members and UIHC health experts met to discuss current updates of data for the COVID-19 pandemic and comment on public health.

UI Campus Health Officer Dan Fick said that students should stay on campus in the event that classes go 100 percent online. For the fall semester, 76 percent of undergraduate instruction is online. Residence halls are scheduled to remain open through the end of the UI fall semester.

“The CDC is not recommending students leave. Our residence halls would be open and the majority of our students would still be on campus,” he said.

University of Iowa Health Care Hospital Epidemiologist Jorge Salinas said keeping students on campus is one of the ways to prevent COVID-19 from spreading into other communities.

“We need to keep people that are at higher risk and the young, college-aged people away from each other. That’s easier said than done,” he said.

Salinas said COVID-19 cases, particularly those among individuals aged 18-25, are declining in Johnson County after a spike during the second week of UI classes. Over the past few days, he said, the numbers of positive cases have plummeted, but he added that the lower numbers could be attributed to the Labor Day weekend, during which many UI students returned home.

“In the last four days or so we’ve seen fewer cases — less than 50, about 30 — per day in this age group. This apparent decrease in cases may be related to a number of factors, one of them is clearly the long weekend we just had,” Salinas said. “It’s possible that some of these people left town. I don’t know if they’ve returned yet or not. But if they did leave town, that may be problematic for several reasons.”

Salinas said that due to the mask mandate in Johnson County and aggressive education efforts, the outbreak has been kept primarily among those 18-25 years old, without spreading to older demographics.

“What worries me — and this is speculation — is what happened to these young people,” Salinas said. “Is it true that they are not infected anymore that the incidence has decreased that steeply that rapidly? The coincidence in time with a long weekend makes me wonder if all that’s happened is that these young people have transferred to other locations that they went back home.”

While the meeting did not allow for public comment, many instructors and Teaching Assistants voiced concerns and asked questions in the comments.

Director of the Division of Comparative Pathology and UI Faculty Senate member David Meyerholz shared concerns about his colleagues’ safety in the classroom, and said he was told by a graduate student TA that their lab could not facilitate six feet social distancing requirements.

Chief Quality Officer and Associate Chief Medical Officer Michael Edmond said he is not optimistic with the UI’s mitigation measures.

“Given the way our numbers look, I don’t think there should be any in-person instruction at any level of education,” he said.

Salinas called for public health leadership and unity in order to progress.

“These outbreaks have to be managed, and the management of outbreaks is multidisciplinary.  There are many things that need to be done,” he said. “We need a true partnership between society, local leaders, local businesses, the university, health care, and public health. We need public health leadership. If only one piece is doing their best, it’s not going to work. We have to work together, otherwise, we’re not going to win the game.”

Salinas acknowledged some issues existed with COVID-19 case data used to make decisions at the university and school level.  Due to a state data glitch, some tests are deleted if someone gets more than one test, which Salinas said the state was working to fix.

“The problem with such type of surveillance is that if there are any incentives or disincentives to report you may have you may not be a true reflection of reality,” Salinas said.

An update on vaccine trials at the UI

At the University of Iowa, one of the first sites to begin trials of a COVID-19 vaccine, officials expect to have trial participants enrolled by next Friday Vice President for Medical Affairs Brooks Jackson told faculty at the meeting.

“It looks really good in terms of being able to generate neutralizing antibody; and the side effects have been pretty minor with this vaccine. I feel pretty confident that it will work, but you never know until you see the data,” Jackson said during the special UI Faculty Senate meeting Wednesday.

The UI announced in August it would participate in an international vaccine clinical trial to test an experimental RNA vaccine developed by drug companies BioNTech and Pfizer.

Jackson said the state is asking the UI to prepare to be able to distribute the vaccine by Nov. 1.

“We have been ordering freezers for the vaccine. So, we are getting prepared just in case this vaccine really is efficacious and meets the safety parameters,” Jackson said.

Albert Bourla, Chief Executive Officer of Pfizer Pharmaceuticals, the company that’s developing the vaccine for the trial the UI is conducting, told the Today show that the company “will have an answer by the end of October” on the vaccine’s safety and effectiveness, but that didn’t mean people would have access to the vaccine by that time.

In a Sept. 5 tweet from Pfizer, the company wrote that it has more than 25,000 participants in the trial. The UI site hopes to enroll 250 people.