Skating through the summer: the return of roller skating during COVID-19

Roller skating quickly became a trend during the early months of COVID-19, gaining popularity on social media such as TikTok or as something to do to get out of the house. But for those who lace up to skate, it’s far more than a trend. 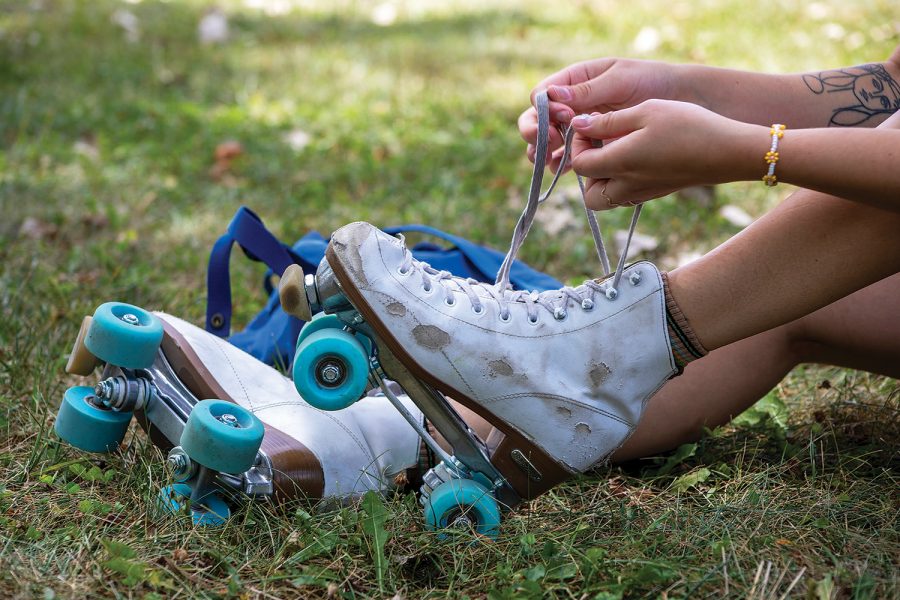 Sunshine poured onto the pavement as Ellie Zupancic whirred past skateboarders on her slightly faded, white roller skates. She dropped into the graffiti-laden concrete bowl of the Iowa City Skatepark, wind whipping her blonde hair behind her as she glided effortlessly over the smooth stone.

Inspired by people she saw roller skating on TikTok, the University of Iowa senior decided to pursue the trend and buy a pair of her own skates. That was in April, and she has yet to favor a normal pair of shoes over ones with wheels.

Zupancic bought her skates on a whim — as she does with many of her purchases — but this buy, in particular, has become part of her daily life. She said she considers herself one of the lucky ones who bought her skates just before they started selling out en mass online.

Having taught herself how to roller skate on the hardwood floors of her living room, the skater now frequents the Iowa City and Oskaloosa skate parks at night when it’s cooler outside.

Due to the increase in demand for skates in the spring of 2020, online stores such as Moxi and Impala very quickly sold out in May and are frequently still sold out in September.

During the spring and summer, roller-skating erupted on TikTok as the hottest pandemic trend. Thousands of videos — many featuring young women like 29-year-old Ana Coto, who has amassed 2 million followers on the app — gracefully gliding down the street on skates with upbeat music in the background dominated “For You” pages across the nation.

On social media, professional roller skaters and dancers like Oumi Janta have gained thousands of followers on Instagram and furthered the trend’s influence.

The trend marks a revival in the activity’s popularity, which also previously exploded both in America’s disco age and the 80s.

Iowa City then was also no exception. A July 1986 edition of The Daily Iowan details a revival of roller skating, when Iowa City Recreation Center offered skating and music from six to eight o’clock on Saturday nights free of charge. Similar to the revival of 2020, skaters were picking up the hobby in the 80s to get out and explore in the summer weather.

“The warmer temperatures are leading some pleasure seekers to glide their time away on rollerskates — an activity that one local merchant claims has been “revived” in Iowa City,” wrote then DI staff writer Susan Stoga.

While the pandemic caused many to learn or re-learn the activity, many newer skaters have also used the trend as an opportunity to inform, especially during a particularly prominent summer in the fight for racial justice.

Many newer skaters like 22-year-old Sam Urlis of Iowa City are quick to speak about roller-skating’s bleaker history and the sport’s prevalence in Black culture long before TikTok. Information spread quickly on the platform and other social media that many roller rinks nationwide were segregated in the 50s and 60s, despite the activity being majorly embedded in Black culture throughout history. Even later on, many rinks still enforced rules that specifically targeted Black skaters.

RELATED: Roller derby: the community under the helmets

Urlis has been skating for a few years, but in the past few months picked it back up again. She only recently discovered the history of roller skating in Black culture and hopes that more people will look into it so the cultural importance is not erased.

“It’s good to know the origins of the popularity of [skating], so that white people aren’t just running around like, ‘Look at this cool thing I made trendy’ when they’re not the first,” Urlis said.

Third year UI student Lisa Gachara often takes her bright white-and-pink skates out for a spin along the Iowa River and around trails in City Park, where she likes to practice tricks — like skating backwards — in a more private setting.

Gachara and her cousin each bought a pair of roller skates together back in April at a sporting goods store in California. The two were home at the time due to the pandemic’s closures of schools and universities across the country.

While Gachara has been skating since elementary school, she said picking the hobby back up again during a time when most people were encouraged to stay indoors allowed her to get out and exercise in a way that also allowed her to de-stress. Whether out on her own with a pair of headphones or skating alongside her cousin down the streets in California, she said it was a great way for her to relax.

“I really like the fact that it gets me moving,” she said. “I’m able to be outside for long periods of time, but I’m also just enjoying the scenery and de-stressing from whatever the day may hold. When I was back at home, it was kind of a way for my cousin and I to bond after a long day.”

With the sounds of R&B or Kenyan afro-pop band Sauti Sol in her ears, some of Gachara’s favorite things about skating now around Iowa City is seeing the increase of new skaters out on the sidewalks.

“It’s so fun to pass by people on the street who are also skating and just have that mutual sense of, ‘Oh my goodness, we’re both out here doing this. I really admire you for that, you’re really cool,’” she said. “And to just like, look at each other and say all those things with one look, and then just continue on is really fun.”

Gachara may still be learning every day, but she said the activity gives her a moment to herself to get away. Even with scrapes on her knees, elbows, and chin from taking some skatepark spills, Zupancic has found a sense of freedom in rollerskating with the breeze blowing over her, whether it’s down the road or in the park. She said that when she puts her skates on, all thoughts about the stressors in her life disappear until she goes home.

Zupancic encourages anyone who wants to buy skates, as there is an excellent community in it.

“A huge part of [skating for me] is the community of people. It’s mostly skateboarders for me because that’s mostly who comes to the skate park besides nine years on scooters, but it’s a little family of people I would have never anticipated. Everyone is so supportive, helping, and hyping each other up. We’ve got each others’ backs,” she said.

Josie Fischels contributed to this story.