Letter to the Editor | Our children were attacked

The recently-released body cam footage of police show that disproportionate force was used against protestors, according to local Iowa City resident. 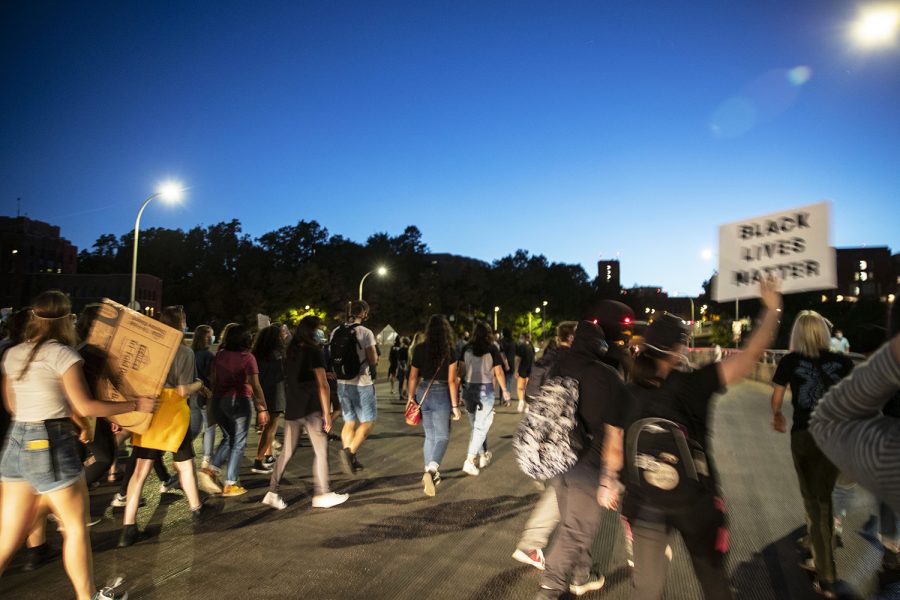 Protesters walk down Burlington Street during a Black Lives Matter protest organized by the Iowa Freedom Riders on Saturday, Aug. 29, 2020. This protest, a part of a four day protest streak, included a memorial for UI student Makeda Scott. Mourners left flowers and candles in front of the Old Capitol Building.

Our Iowa City Police Department and our Iowa State Patrol attacked our kids with terrifying weapons.

There is no other conclusion when watching the released bodycam footage from the night of June 3, when Black Lives Matter protesters attempted to enter Interstate 80. Officers were there in sufficient numbers and were well enough positioned to block that from happening. They were visibly heavily equipped and posed an intimidating force. Presumably, they were there to keep the peace.

But the only peacekeeping I saw was from the protesters. They approached slowly with their hands up. There was no reasonable indication that any of them had a weapon or were bodily threatening officers. That had not happened elsewhere during the previous days’ protests. Yes, there had been vandalism around town, some spray paint and a few broken windows, but no serious crimes like arson or looting. The citizens who appeared before the officers were clearly committed to peaceful, if loud and angry, protest.

The officers could have, and should have been able, to withstand people yelling at and insulting them for hours if that’s what it took. You’d think they’d be tough and principled enough to do that. Everyone would have eventually gone home, and mission accomplished — peace was kept. Heck, they could have ordered a hundred pizzas and fed everyone and tried to actively reduce tensions and foster dialogue. It would have been another victory for democracy and rights in America.

Instead, within about 80 seconds after the marchers came to a stop a few feet in front of the line of police, the police opened fire without warning. No, not with bullets, but anyone in that crowd would have been reasonable to think that’s what was happening. Terrifying, ear-splitting shots, blinding flashes and smoke everywhere, sprays of chemicals like from a fire hose. The protesters fell way back. About 40 feet away from the police line, off to the side between them and the marchers, a small group of people gathered around a person in distress, quite possibly having a seizure triggered by the police attack. They were calling for help from the police. Not one officer walked over to learn what the problem was, to see if they could help. Instead, after almost 20 minutes, the officers opened fire on them — more cracks and flash and smoke.

The officers at the scene were peacebreaking. They made no attempt at keeping the peace. The people they attacked, quickly and without warning, are our fellow citizens, and most of them are our kids. My daughter left the march earlier that evening, but it certainly could have been her. It could have been me, or you, or your coworker or daughter or neighbor.

I’m a lifelong Iowa Citian, with a deep love for our community. I’m ashamed, sickened, and saddened by the police attack I saw on our streets. This is why our police have lost the trust of many, and why many demand that the University of Iowa cut its ties with the Iowa City Police Department. It is why the UI must ensure that its Police Department is highly trained in de-escalation and peacekeeping. I hope all Iowa Citians will watch the video at https://youtu.be/lzMVTakNQtg and decide who is peaceful — the marchers or the police —and who is not.