After graduating 13 seniors last year, the Hawkeyes have had several leaders step up during the transition to the fall season. 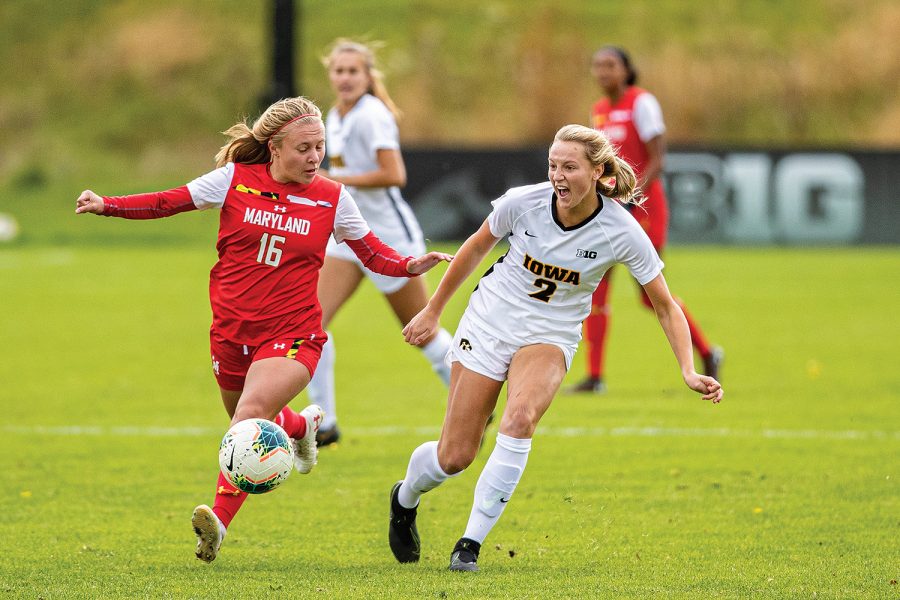 Iowa midfielder Hailey Rydberg makes a pass during a women's soccer match between Iowa and Maryland at the Iowa Soccer Complex on Sunday, October 13, 2019. The Hawkeyes shut out the Terrapins, 4-0.

Normally, graduating 13 seniors is a large enough challenge for any team. However, with a short spring season and strange summer and fall schedules, new leaders on the Iowa soccer team are facing plenty of obstacles as they adjust to their new roles on the team.

What makes things even more interesting is how there is only one senior for the upcoming season, Diane Senkowski. Senkowski played in six games last year, tallying 106 minutes, including three games against Big Ten opposition.

Senkowski hasn’t always been a focal point on the field for the team, but her dedication and effort shown in practice may elevate her to a bigger role this season.

“Senkowski does a great job leading in a different way,” head coach Dave DiIanni said. “It’s unique having only one senior and understanding what she does in her own regard in how she leads.”

With that in mind, some of the juniors are having to step up for the upcoming season and become the main leaders of the team. With such a strong senior class last season, the current juniors have been given the proper tools to succeed.

“We’ve had a group that we’ve been working with for the last year that have learned, listened and followed the group that left,” DiIanni said

When talking to the players and coaches, it became clear that some of the players stood out among their peers in the locker room and on the pitch. Sara Wheaton, Hailey Rydberg, Riley Whitaker, Monica Wilhelm, Jenny Cape, and Sam Cary are all part of a leadership group that has been entrusted with helping steer the team along and help create a great environment.

Most players recognized the group on the team as being important leaders for the young squad. It is an honor for these players to be seen as leaders by the rest of the squad, Rydberg said.

“It’s awesome that they think of me as someone they can go to, and it’s really nice knowing we have that core group of players on the team,” Rydberg said.

The group has had to stay tough and demonstrate solid leadership during this time. Keeping the team on track and motivated while navigating so many unknowns is vital, as the extra work being done now could give the team a much-needed boost whenever the season kicks off.

Another important part of leadership is helping guide the incoming class. The transition is always a difficult one, but with all the extra baggage of this semester, the leaders know it is their job to step up and show the younger players the ropes.

“I’ve just been telling them it’s a process and just to focus on the process and take every moment that we’re given and take advantage of that,” Whitaker said.

The freshmen have done just that so far, and shown a good attitude in training as the team continues to mesh together.

“It’s been nice to see them come to practice every day, wanting to get better and working harder,” Rydberg said.