The department will save $2.558 million in salary and fringe benefits from cutting the 40 positions. 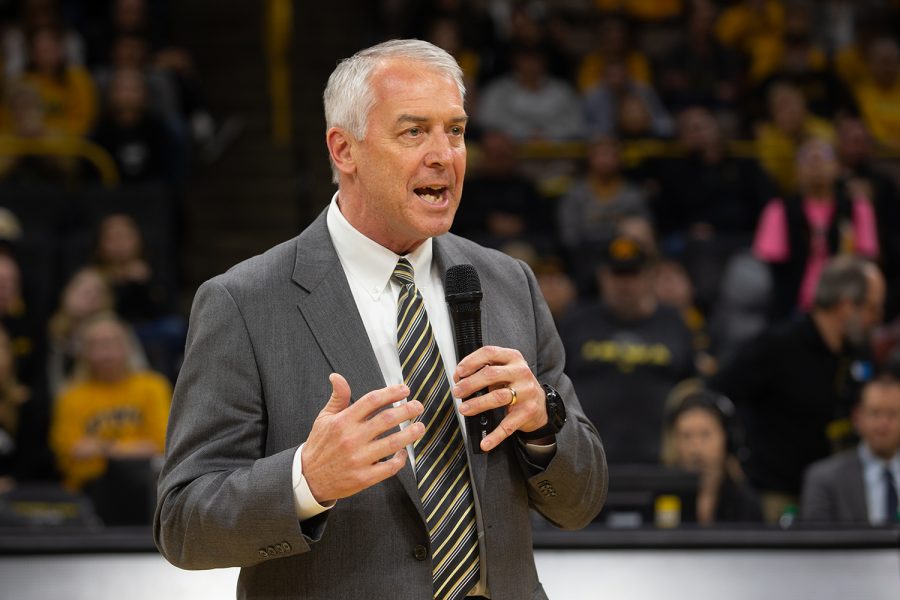 The University of Iowa athletics department confirmed Tuesday that it will cut or leave vacant 40 positions because of financial shortfalls caused by the COVID-19 pandemic.

The department will also require all regular, non-contracted employees to take 15 unpaid furlough days before Dec. 31. This does not include senior staff members. This news was first reported by the Cedar Rapids Gazette.

According to an Iowa spokesperson, nineteen regular staff members, 10 biweekly staff members, and one graduate assistant are being laid off, while the remaining 10 positions will go unfilled after other departures. The department will save approximately $2.558 million in salary and fringe benefits from the 40 positions. It will also save an additional $556,000 from staff furloughs.

Senior staff members will take a five percent base salary cut instead of the furlough. This includes administrators, but does not include coaches.

Saff members who had positions eliminated will continue to work for different lengths of time, depending on years of service. Some biweekly staff will have a one-month notice, and regular staff will have either a three month, six month, nine month, or 12 month notice period before their employment end date, an Iowa spokesperson said in an email.

These moves are in addition to budget reductions Iowa Athletic Director Gary Barta announced on June 30. At that time, Barta said the department’s budget would be reduced by $15 million for the 2021 fiscal year, including nearly $13 million in reduced operating expenses and the remaining in compensation adjustments.

As part of those reductions, Iowa’s top-earning head coaches Lisa Bluder, Tom Brands, Kirk Ferentz, and Fran McCaffery all voluntarily agreed to a one-year, 15-percent base salary reduction or contribution back to the athletics department. Deputy Athletics Director Barbara Burke agreed to a 25-percent salary reduction, while Barta had his total compensation package reduced by more than 30 percent.

Following the Big Ten’s decision on Aug. 11 to postpone its fall sports seasons, Barta said that the department was anticipating $100 million in lost revenue and a $60-75 million deficit with no football in the fall.

Barta said that the department is working on securing a $75 million loan.

Hawkeye athletics had an operating revenue of $152 million for the 2019 fiscal year. After $146.3 million in expenses, it made a $5.7 million net surplus.

The department’s financial situation also led Iowa to cut four sports programs: men’s and women’s swimming and diving and men’s tennis and gymnastics. These programs will be discontinued at the end of the 2020-21 academic year and will save the department north of $5 million annually, Barta said.

“You can start to go down all these different roads,” Barta said on an Aug. 21 video conference. “In the end, whatever I came up with, whatever we came up with, you could make the case that we shouldn’t have cut this one, or we should have cut that one instead. We ended up cutting the sports we felt were going to best position us to come out of this pandemic once it’s all over.”

Iowa is the latest Big Ten athletics department to administer cuts and furloughs because of the COVID-19 pandemic. The University of Michigan athletics department announced Sept. 1 that it was eliminating 21 positions and will not fill 15 jobs that had come open in recent weeks. All athletics staff members and coaches also took 10 percent pay cuts.

In August, The University of Nebraska announced that 51 athletics department employees would be put on furlough and all others would take a 10 percent pay cut because of the department’s financial situation.

To date, Iowa remains the only Big Ten school to cut sports in response to COVID-19 budget shortfalls.