The Hawkeyes’ international players come from multiple countries around Europe and Tasmania. 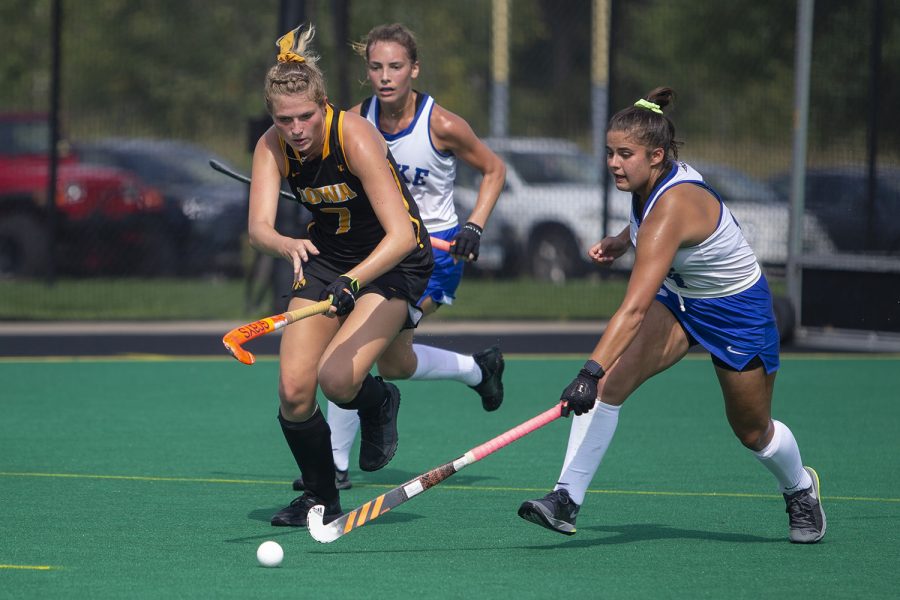 Iowa midfielder Ellie Holley runs after the ball during a field hockey game between Iowa and Duke at Grant Field on Sunday, September 15, 2019. The Hawkeyes were defeated by the Blue Devils, 2-1 after two overtime periods.

Even without the game being played at most levels in the state of Iowa, the Hawkeye field hockey team always seems to put together a competitive roster.

Assistant coach Michael Boal is also from the United Kingdom.

Despite field hockey not being very popular in Iowa and the Midwest, it is so on the east coast and especially internationally. According to senior midfielder Ellie Holley, it is the most popular sport for girls in the UK, and the first sport that most girls are introduced to.

Although the international players are far from home, no player on the team is necessarily close to their roots. There’s no high school or club field hockey played in the state of Iowa, and all of the players on the Hawkeye field hockey team are from out of state. Only four players are from the Midwest.

Being an international student, Holley said that everyone being far from home helped foster a community within the team.

“No one really is from Iowa,” Holley said. “No one goes home, so everyone is homesick . . . everyone on the team experiences it the same as each other.”

Junior defender Anthe Nijziel said the main reason she came to the U.S. to play field hockey is because athletics are ingrained into universities here, unlike universities in Europe. Athletics are typically not a part of the university in Europe, and players have to join a club team to keep playing. Professors and teachers also are not as accommodating for practices and games.

For Holley, assistant coach Michael Boal “massively” played a part in her choosing to come to Iowa.

“[The international presence] was one of the main points that really persuaded me to go [to Iowa] over other colleges,” Holley said. “It had such a huge emphasis on international students … there were about eight internationals on the team, having Michael as our coach, it just felt like I wasn’t going to be the only one with all these questions.”

Holley said she also takes advantage of International Student and Scholar Services at Iowa, where international students can go for questions about visas, work, COVID-19, and other services.

Boal is excited about the number of international players on the team now, compared to a couple years ago, and he hopes that the trend will continue in the future.

“It tends to be that once you kind of break through and get someone [international] to come, then it opens the market for others to follow suit,” Boal said. “It’s been a great process and great to have them all come through and it’s something that we want to continue.

Playing Division I field hockey in a state where there is little to no field hockey, Nijziel said she wants to bring more recognition to the sport.

“People in America have never watched a field hockey game — like 90 percent of them don’t even know what field hockey is,” Nijziel said. “I kind of like that we have more international players so we can bring more attention to it . . . making it bigger in America, that would be amazing.”