Iowa City is currently set to host the event. Greg Earhart, the executive director of the College Swimming and Diving Coaches Association of America, said in a statement Thursday that he supports the NCAA's pursuit of a new host site following Iowa's decision to cut its swimming and diving programs. 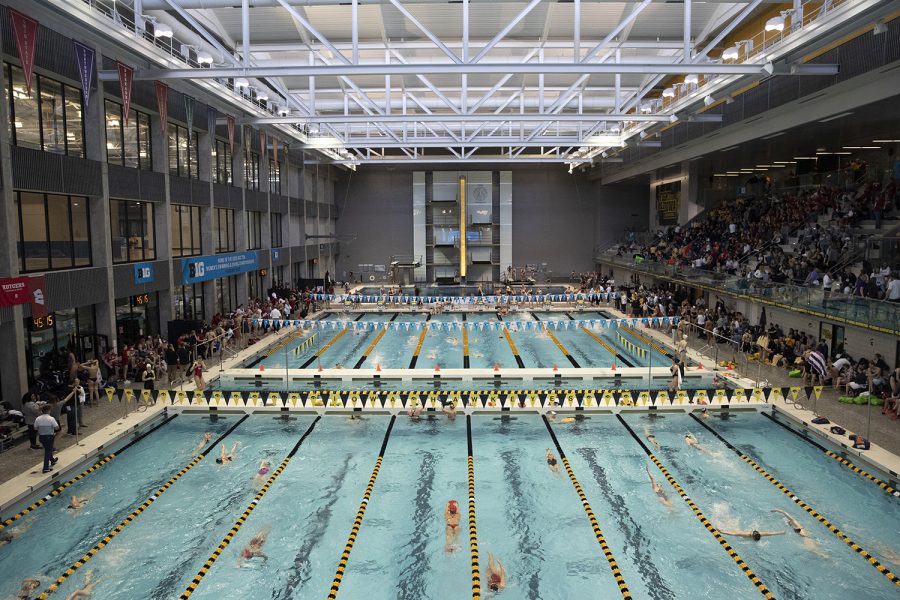 Swimmers warm up before competition begins during the Thursday preliminary round of competition of the 2020 Women’s Women Big Ten Swim & Dive Championships on Thursday, Feb. 20, 2020 at the Campus Recreation and Wellness Center. Swimmers competed in the 500 Yard Freestyle, the 200 Yard Individual Medley, and the 50 Yard Freestyle.

The NCAA is reportedly searching for a new host site of the 2021 Men’s Division I Swimming and Diving Championships following Iowa’s decision to cut both its men’s and women’s swimming and diving programs.

Greg Earhart, the executive director of the College Swimming and Diving Coaches Association of America, said in a statement Thursday that the NCAA has started “a pursuit of a new, more deserving, site for this event.”

“The 2021 Men’s Division I Swimming & Diving Championships were set to generate nearly $1.5 million in economic impact for Iowa City and thousands more in earned positive media for the university,” Earhart said in the statement.

While we feel for the Iowa City and @IowaSwimmingInc community, we fully support the @NCAA’s search for a new host of the 2021 NCAA Division I Swimming & Diving Championships. #saveiowasports #SaveHawkeyeSports @presscitizen pic.twitter.com/DQgP1WEfee

University of Iowa President Bruce Harreld and Athletic Director Gary Barta announced in an open letter on Aug. 21 that four sports programs — men’s and women’s swimming and diving and men’s tennis and gymnastics — would be discontinued at the end of the 2020-21 academic year because of financial shortfalls caused by the COVID-19 pandemic.

Following the Big Ten’s decision Aug. 11 to postpone all fall sports in the conference, Barta said that the athletic department was anticipating $100 million in revenue loss and a $60-75 million deficit. Cutting these four sports saves Iowa “north of $5 million” annually, Barta said.

Iowa City was announced as the host of the event, which is currently scheduled for March 24-27, 2021, in 2017. Iowa last hosted the Men’s Division I NCAA Swimming & Diving Championship in 2015.

Barta said on a video conference Aug. 24 that he notified the NCAA of the school’s decision to cut its swimming and diving programs to allow it to determine if Iowa will still host the event.

The NCAA has not officially announced that it is looking elsewhere for the event, and said in an email to The Daily Iowan that “As details regarding the Division I Men’s Swimming and Diving Championships become available, we will share with our membership and the public.”

Iowa did not respond to The Daily Iowan’s request for comment by the time of publishing.

Iowa’s $69 million Campus Recreation and Wellness Center, which opened in 2010 and is considered one of the best swimming facilities in the country, was set to play host to the event.

“It probably is the biggest meet in the country,” senior Sage Ohlensehlen said. “There’s a bunch of people that feel right now that Iowa should not get to host that meet. Obviously when a school hosts a meet that big, they make a lot of revenue. It doesn’t really make sense to people why Iowa should make money off of the swimming community when they’ve disrespected it so badly.”

“Some days, I’m like, ‘oh it’s good, we’re showing what we have,’” sophomore Preston Planells said. “At the same time, it’s like, ‘well, you’re getting rid of us.’ About a week ago, I would’ve probably been ecstatic. I’d probably be like, ‘yes, we’re about to show up. This is so amazing for the community.’ I think it’s just hard to swallow.”