DiInni shares some insight about his coaching philosophy, and how it has translated to the field over the past few years. 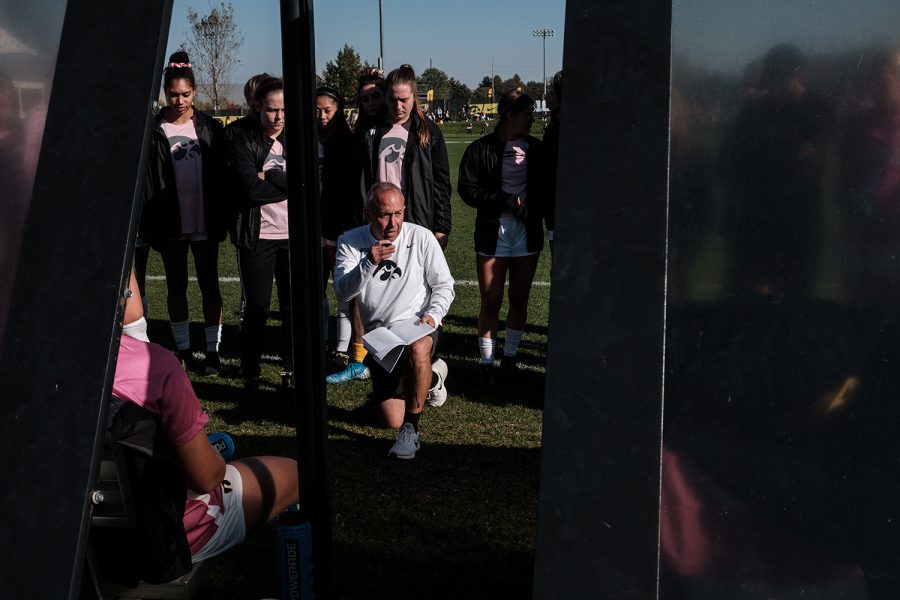 Iowa Head Coach Dave Diianni speaks to the team during the Iowa versus Ohio State game at the University of Iowa Soccer Complex on Sunday, October 27, 2019. The Hawkeyes defeated the Buckeyes 2-1 in double overtime.

Iowa women’s soccer coach Dave DiIanni has overseen the program’s steady ascent in recent years, culminating in a historic season in 2019. The team set numerous records and clinched a berth in the NCAA Tournament for the second time ever.

A large part of that success can be attributed to the program’s strong roster, now led by 13 seniors and three all-conference players. However, credit is due to the setup of the team, which complimented the strengths of its players. Changing the team’s setup based on personnel is one of the main aspects of DiIanni’s coaching style.

“A lot of the tactics have to do with the players we have and the skill level that exists in their ability,” he said.

When DiIanni first started coaching at the UI in 2014, the team’s personnel could not yet play his preferred method. However, as he recruited and brought in his own players, the team started to play a more advanced style that has helped Iowa become a more difficult opponent.

This somewhat goes against the grain of what many college teams set up with now. With players getting faster and stronger, DiIanni says a lot of teams set up like the professional Liverpool, to take advantage of their athleticism and quickness on both sides of the ball in what is commonly a 4-3-3 formation.

For Iowa, although the playing style has slightly shifted based on who all is involved in the team, it has remained mostly consistent over the past few seasons. This has helped the players adjust more easily and get comfortable playing a certain way.

“Obviously, as personnel changes it shifts a little bit, but the main themes have remained constant,” junior Riley Whitaker said.

That all came to fruition last year as the team consistently set up in a way that was difficult to break down, which made the Hawkeyes lethal on set pieces.

“We were very organized, very confrontational and very difficult to break down in our 4-1-4-1 formation,” DiIanni said.

The team allowed only 18 goals in 21 games, only allowing 6.8 shots per game.

One thing that has helped DiIanni set up his teams with a complete understanding of the game is his knowledge he brings from his playing career. He was a member of the Canadian National Team player pool and played college soccer at the NAIA level. During that time, he played at nearly every position on the field, helping him understand the game from all different angles.

With a break in play caused by COVID-19, the team has had time to reflect on film from the past season and watch some professional teams play during their down time.

“In the beginning of quarantine, we did a lot of team Zoom sessions, and going off of that we did a lot of tactical and functional zooms,” Hailey Rydberg said. “I was with the midfield group, and that allowed us to really dive into more of a midfield function.”

It remains to be seen how the team will set up for this season, but there will certainly still be plenty of time to contemplate. A more defensive setup is highly possible, given the lack of returning players and reliability on set pieces. The team will benefit from not relying on one player for offense. The team posted 16 different goal-scorers last season, the most in the country.