With no competition this fall per order of the Big Ten Conference, the Hawkeye tennis teams look to prepare for the spring with a rigorous, competitive practice schedule. 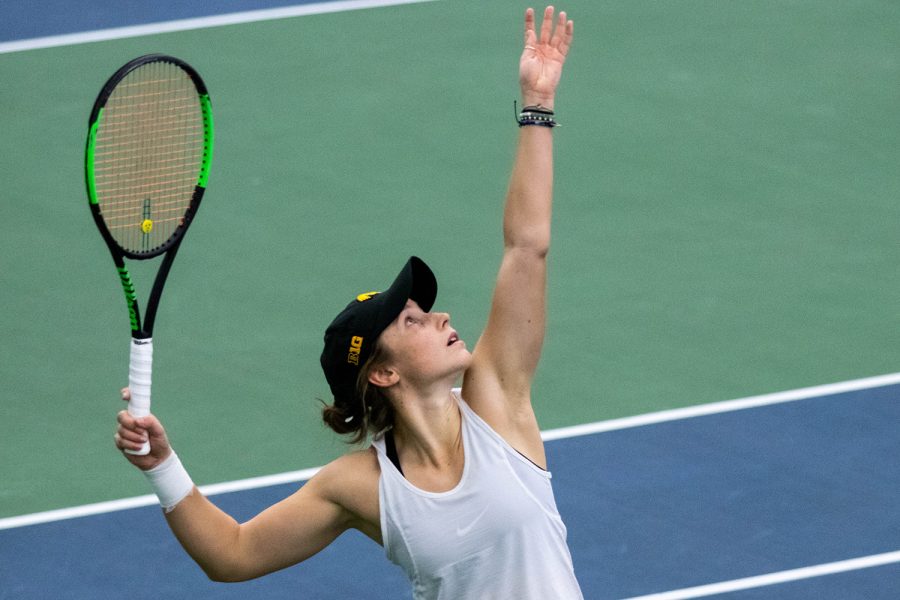 Iowa's Elise van Heuvelen serves during a women's tennis match between Iowa and Kansas State at HTRC on Sunday, Feb. 23, 2020. The Hawkeyes defeated the Wildcats 4-3.

Almost five months after receiving the news that the rest of their spring season had been canceled, the Iowa men’s and women’s tennis teams will have to wait even longer before they can step on the court for a competitive match.

Though the Intercollegiate Tennis Association announced in July that it plans to move forward with a modified version of its fall circuit, the Hawkeye tennis teams are following the orders of the Big Ten and will not be competing in tournaments this fall.

Instead, they will turn to a loaded and competitive practice schedule to stay in shape and prepare for the spring season.

“Since we don’t have any competition, we ended up going straight into our 20-hour week for the first week of school,” said head women’s tennis coach Sasha Schmid. “With school going online after Thanksgiving, we really felt like we needed to give ourselves the best chance to start training at a high level immediately.”

While other players will be competing this fall in ITA events and other tournaments across the country, Schmid said she is not worried about the fact that a lot of her team will likely go into this year’s spring season having not played in a competitive match since March.

RELATED: Council established to save Iowa swimming and diving programs

“My team would love to compete, but I also think they want to make sure they are being as safe as possible,” the coach said. “I think if we can, within our own team structure, create a situation where we can try to be as competitive as possible and still be safe, I think that is the best method for us.”

The athletes on the men’s and women’s tennis team will have to adjust to new practice regulations in order to try and keep everyone healthy amid a pandemic. The key changes include wearing masks during practices and workouts, bringing in a survey each practice day verifying that they are not experiencing any COVID-19 symptoms, and getting their temperature checked before workouts.

While wearing masks during warm weather practices and keeping their distance from teammates does provide a minor inconvenience, redshirt senior Elise van Heuvelen Treadwell said that it is not too much of an adjustment.

“It is hard just with the little habits that you might have on the court that change with certain protocols, but it is something that we have to get through and something we have to do in order to be able to play,” van Heuvelen Treadwell said.

Accountability will be key for all of the athletes this fall as their decisions can affect the health of the teammates they see almost every day.

“Obviously, there are very challenging times not just for athletes but for everyone having seen the spike in cases last week,” redshirt junior Will Davies said. “It is a lot easier now that our classes are online, so the guys will work out, play tennis, and then we will just stay home and do stuff as a team to limit the spread of the virus.”

With no competition this fall for Hawkeye tennis, the next matches will not be for many months, if they do end up happening at all. While it could be hard for a lot of players to practice hard for a season that far away, Davies said that the team and coaching staff is very professional and shows up every day to leave it all on the court.

Now in her fifth and final year with the Hawkeyes, van Heuvelen Treadwell said she, like the rest of her teammates, is just happy to be on the court again playing the game she loves.

“There is so much without competition that you can get better at, work on, and grow,” the senior said. “Right now, for me, every day that we can be out there I am very grateful for because it can be taken away at any second.”