Hundreds of UI students and faculty members have pledged to call in sick to their classes today. The sickout was organized by an anonymous coalition of students, faculty and staff at UI who want to see all classes moved online. 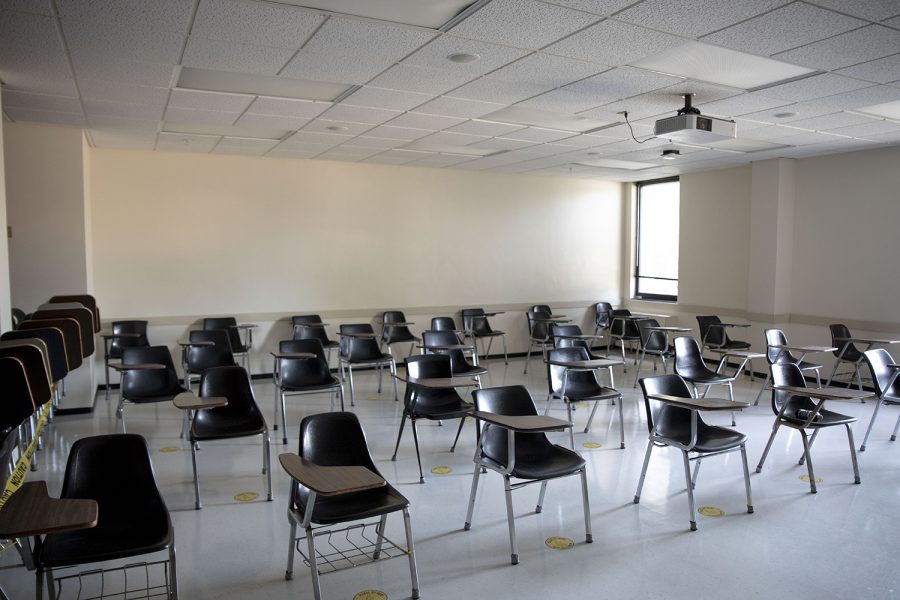 That’s what organizers of the Sept. 2 sickout are asking of University of Iowa students and faculty, with the hopes of getting the UI to move all classes online.

An anonymous group of undergraduate students, graduate students, instructors, faculty, and staff launched the social media campaign on Twitter and Instagram on Aug. 23, sharing numbers related to COVID-19 and posts explaining how and why students should demand all classes go virtual.

This comes after the most recent release of self-reported COVID-19 infections at the UI. According to an update on Aug. 31, 922 students and 13 employees have self-reported testing positive.

“That’s 922 students who may have permanent lung, heart, or neurological damage, may have to be hospitalized, and may even die,” UIowa sickout organizers said in a prepared statement emailed to The Daily Iowan. “…who may have already unwittingly spread the virus to their parents and grandparents, to their friends, to their neighbors, to essential workers…so we aren’t seeing the true height of the spread at UIowa yet.”

The organizers said they had received more than 450 pledges as of Tuesday afternoon and expected that number to reach 500 by the end of the day.

On Tuesday afternoon, UI Associate Provost for Graduate Education and Dean of the Graduate College John Keller and UI Interim Provost Kevin Kregel sent an email to the Campaign to Organize Graduate students and to all UI faculty to express their disagreement with the sickout.

“The unplanned and unauthorized absence of graduate-level instructors compromises our students’ ability to maintain the educational progress critical to their future success,” the email read. “Accordingly, while we acknowledge your concerns about in-person instruction, we strongly disagree with your manner of expressing those concerns. We respectfully remind your members of their obligation to deliver instruction as assigned, and to provide appropriate notice of absences due to illness.”

The email said the UI administration hopes in the future, members of COGS will employ other means of expression to prevent disruption to the educational progress of students. According to an email from the organizers of the sickout protest, COGS is not affiliated with the UI sickout.

Though some staff have pledged to participate, the organizers focused on encouraging students and faculty to call in sick, because they don’t want to deny staff their sick days, the group said.

Organizers said they had been discussing the sickout for a while, but held off, expecting the university to shut down within the first week.

“Watching the disaster that was last week’s reopening, and seeing the University of Iowa’s insufficient response, made us realize that it was time to take collective action to protect our teachers and students, our janitors and librarians, and our Iowa City community at large,” UIowa sick out organizers said.

Angel Worrell, a pre-med third year student, will be calling in sick to her in-person class on Wednesday. Worrell has a three-month-old baby at home, and when she heard campus was going to be open, she was worried about exposing her boyfriend and child to COVID-19 by attending her two in-person classes.

Worell said she has a friend that works at the university who constantly has to tell students to put their masks on.

“That’s really scary that people are still fighting it,” she said. “So, I just wish that the university would enforce these guidelines.”

If the university doesn’t move classes online, Worrell said she plans to email her professors and find a way to stay home as much as possible.

Second-year UI graduate student Ruben Reyes, also an instructor of general education literature, is doing most of his teaching online, but teaches a small discussion section once a week.

Reyes said he was conflicted about participating in the sickout and didn’t want to create more chaos for his students, but he did support the goals of the movement. He decided to sign the sickout pledge, he said, and will teach a shorter class on Wednesday.

“I think the risk has made itself clear in this first week,” he said, “and I think it’s irresponsible for us to continue on this path simply because the administration won’t acknowledge that it may have miscalculated.”