Law enforcement arrested Des Moines Black Lives Matter organizer Matthew Bruce Monday night after a protest in Iowa City. He was charged with a assault on an officer and interference with official acts. 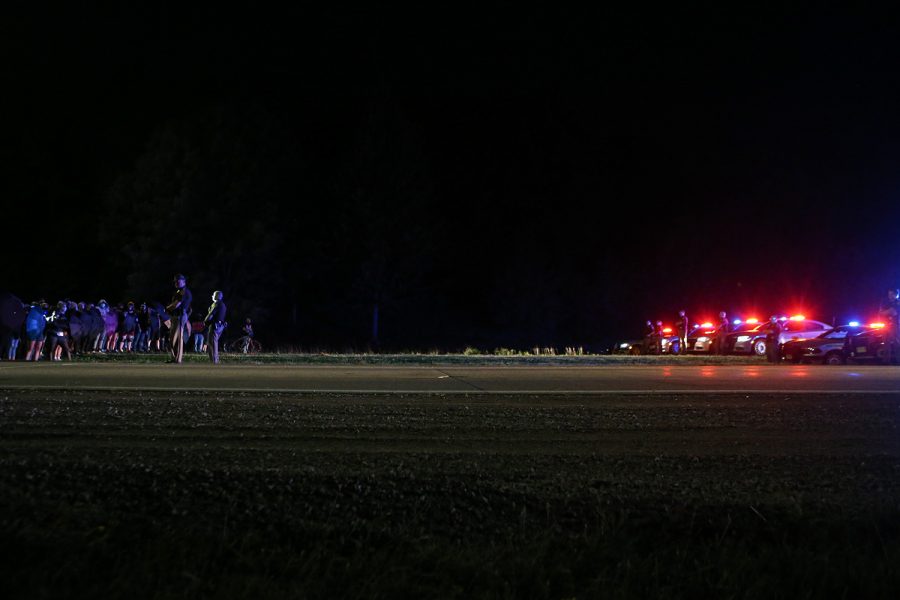 A group of protesters stands across from a police line of Iowa State Police on Dubuque Street in Iowa City during a march to support the Black Lives Matter movement and protest police brutality on Monday, August 31. Two police officers approached the group of protesters in an attempt to deescalate the situation, but protesters were angered that the officers weren't wearing facemasks to prevent the spread of COVID-19. (Jake Maish/The Daily Iowan)

Monday marked the fourth consecutive night that Iowa City community members and activists joined together to march for racial justice and to make their demands clear ahead of Tuesday’s Iowa City City Council meeting.

About 100 protesters, led by the Iowa Freedom Riders, marched from the Pentacrest, down Dubuque Street, to a large police presence before the I-80 on-ramp.

People were shielding the front of the march with umbrellas to protect from potential tear gas and from being identified.

I’ll be live tweeting tonight’s protest organized by the Iowa Freedom Riders for @TheDailyIowan. There is a group of security guards behind a barricade guarding the Old Capitol after the UI cleaned off spray paint. pic.twitter.com/c8h6KjcJcW

The face off lasted about an hour before the protesters turned around and marched back to the Pentacrest. Protesters were yelling and trying to engage with the officers, but the line of officers remained mostly expressionless during the encounter.

The protests began on Aug. 28 and were planned to take place every night before Tuesday’s city council meeting. Protestors are calling for the release of a video that shows the Iowa State Patrol giving the order to use tear gas on protestors on June 3.

The protesters also voiced opposition to a purchase of tasers for the police department the City Council will vote on during its Tuesday meeting. The purchase would cost $230,000 over five years, and the funds would come from money allocated to the police department in the budget passed by the council in March.

Organizers during Monday night’s protests encouraged people to sign up to speak at Tuesday’s City Council meeting to voice their opposition to the proposal.

The series of protests are also in solidarity with Jacob Blake, a Black man who was shot seven times and paralyzed by police in Wisconsin, and Makeda Scott, a former UI student who drowned at Lake MacBride. The Iowa Freedom Riders want the Johnson County Sheriff’s Department to take a closer look into the incident. An investigation is ongoing.

Around 7:30 p.m., about 150 people gathered in front of the Pentacrest, barricaded and guarded by about a dozen UIPD officers. IFR leaders told protesters to protect their identities with face masks and other accessories in response to authorities arresting protesters.

According to a witness at the scene, Des Moines Black Lives Matter leader, Matthew Bruce, 24, was arrested after Monday night’s protest. The witness said that Bruce was not read his rights by law enforcement. The reading of Miranda rights isn’t required unless police plan to question a suspect and use it as evidence in a trial. It is unclear whether UIPD or ICPD made the arrest. According to the Johnson County jail roster, Bruce was charged with a class D felony for assault on an officer and a misdemeanor — interference with official acts.

At least two people were arrested by University of Iowa police this weekend in connection to the protests and are facing felony charges for spray painting the Old Capitol. A third person was arrested and charged with second degree criminal mischief, but the person was classified as a juvenile and no criminal complaint was available. At least 15 people have been arrested and charged since the protests began in June.

Marchers reached the on-ramp to I-80 around 9:45 p.m. A line of Iowa State Patrol officers prevented the crowd from entering I-80. Officers stood silent as protesters chanted and asked questions.

When the DI asked one officer for his name, he refused to respond.

Around 10:45 p.m., the crowd turned around and began marching back to the Pentacrest to conclude the protest.