Whenever Iowa field hockey’s season gets underway, goalkeeper Grace McGuire is prepared to step into a starting role. 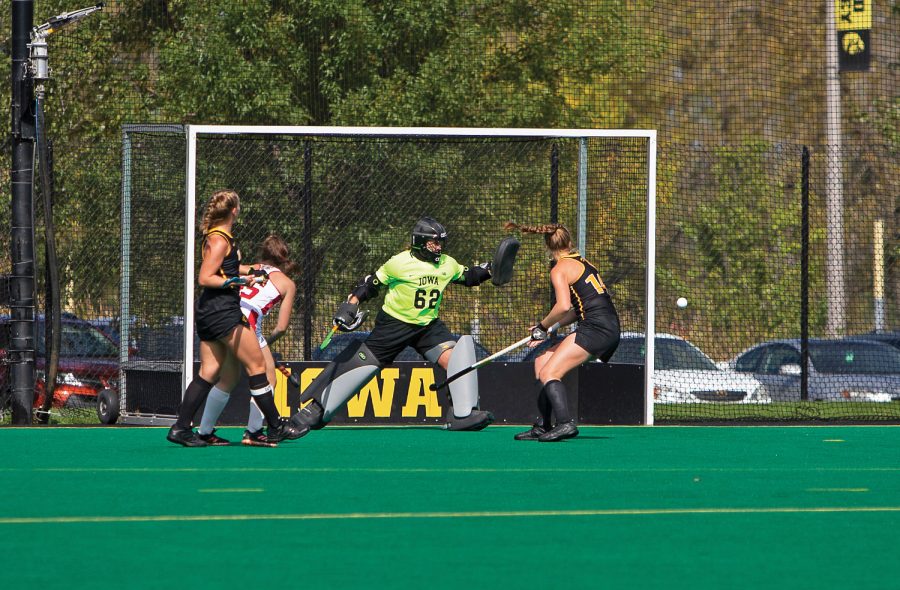 Iowa goalkeeper Grace McGuire blocks a shot on goal during the Iowa field hockey match against Rutgers on Friday, Oct. 4, 2019 at Grant Field. The Hawkeyes beat the Scarlet Knights 2-1.

Iowa field hockey goalkeeper Grace McGuire is no stranger to missing a season.

McGuire graduated high school a semester early in 2018, and enrolled at Iowa for the spring semester in order to get extra training time in as a Hawkeye.

“[Field] hockey is not really a big thing – not as popular – where I’m from,” said McGuire, a St. Louis, Missouri native. “I was just really eager and looking forward to getting more training and experience and to be ready before fall came around.”

When the season was about to start, McGuire couldn’t take advantage of all of her training.

After working with the team throughout the spring and summer, McGuire suffered a season-ending ankle injury.

McGuire took a redshirt that season, and watched from the sidelines as the 2018 field hockey team made it to the Sweet 16 of the NCAA tournament.

This season, McGuire is finally getting her shot as starting goalkeeper. After recovering from her ankle injury, she played behind senior goalkeeper Leslie Speight during the 2019 season. McGuire appeared in only six of Iowa’s 22 games in 2019, starting just two times.

McGuire recorded 185 minutes total of play last season, with seven saves, a .636 save percentage, and a 1-1 record as a goalie.

The 2019 Iowa field hockey team went 17-5 overall, winning the Big Ten Championship and making it to the Elite Eight of the NCAA tournament before falling to No. 1 North Carolina, the eventual NCAA champions.

Head coach Lisa Cellucci is hopeful that McGuire will finally have the opportunity to play more this spring.

“On the field, she has lots of talent,” Cellucci said. “The goalkeeper — you’re kind of the quarterback back there on the defense, and she’s a great communicator . . . She’s a force to be reckoned with, and will be for the next couple years.”

In this unexpected offseason, McGuire is focusing on honing her skills. Specifically, McGuire mentioned improving her defense of the corners of the goal. She’s also excited for the opportunity to incorporate the freshmen on the team and connect with them as much as possible.

“She is just super energetic, positive, and one of the most well-liked people on the team,” Cellucci said. “She is one of those people who pulls everybody together.”

Although McGuire is going into the second semester of her junior year academically, she still has at least three years left of eligibility with the Hawkeyes. Right now, she doesn’t know where she stands on the extra year of eligibility that was given to all fall-sport athletes by the NCAA on Aug. 21.

As an art and a criminology major, McGuire is keeping her options open both for her career with the Hawkeyes and after.

“I know it’s a weird combo,” McGuire said. “But it’s what I’m interested in.”