The longtime head coach and former Hawkeye swimmer is determined to guide his athletes through Iowa’s decision to cut both the men’s and women’s swimming and diving programs at the end of the academic year. 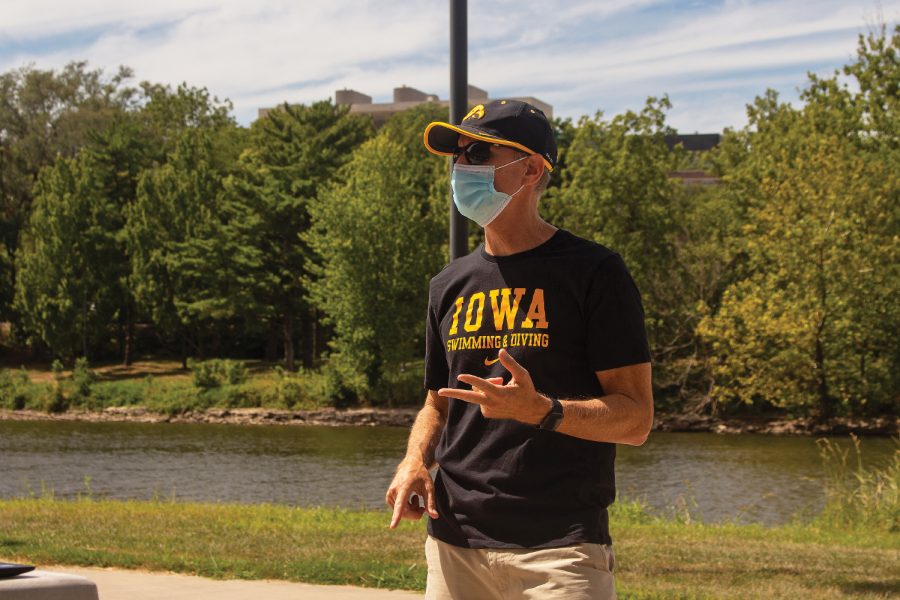 Head Coach Marc Long speaks at the save swim meeting outside the IMU on Aug. 29, 2020.

Marc Long is entering his 17th season as head coach for the Iowa swimming and diving team, and 16th leading both the men’s and women’s programs. On Aug. 21, however, he found out it would also be his last.

University of Iowa President Bruce Harreld and Athletic Director Gary Barta released an open letter that day, which announced that four Hawkeye programs — men’s and women’s swimming and diving and men’s tennis and gymnastics — would be discontinued at the end of the 2020-21 academic year, citing financial shortfalls caused by the COVID-19 pandemic.

Long and his athletes, as well as the men’s tennis and men’s gymnastics teams, had been informed of the news at a meeting held by Barta only hours before the decision was publicly announced.

“My role is to lead this team through this,” Long said. “Whatever path each kid has to take.”

As a Hall of Fame swimmer for Iowa from 1987-89, Long was a three-time Big Ten Champion and six-time All-American. As Iowa’s coach, the Cedar Falls native has led over 400 Hawkeyes to qualify for the NCAA Championships. What the program and its athletes are facing now is an entirely different challenge.

Since the announcement, Long said a “majority” of his team is now in the NCAA transfer portal, at least looking for other opportunities.

Barta said in a video conference on Aug. 24 that he encouraged athletes in the four sports to be discontinued to put their names in the portal and weigh their options. Under the circumstances, Barta said any athlete from these sports would be “welcomed back” and retain their scholarship if they decide to remove their name from the portal.

One parent of a Hawkeye athlete told Long that as many as 40 schools had been in contact with that athlete since Iowa’s announcement. Long is assuming others have experienced something similar.

“These are people we’ve invested in; they’ve invested in Iowa,” Long said. “They don’t want to leave. But some have already left. There’s so much uncertainty with the season. Our focus right now is just on those athletes — making sure they are taken care of. Making sure they can have the best experience this year. And then finding them the best experience next year, as difficult as that is.”

The “outpouring of support” that the program has received from swimming alumni and parents has been constant. Long said he’s barely had the opportunity to put his phone down lately.

Long isn’t sure what he’ll do once his time with Iowa ends. There will be time to think about that whenever the season ends. Long’s current focus, he said, is on his athletes.

That includes helping these athletes grieve over losing their program, while also guiding them through the start of the school year amid a pandemic and preparing them for a season that may not take place because of COVID-19.

“I’ve seen a big change in our coach Marc Long,” Iowa swimmer Sage Ohlensehlen said. “[After the announcement], he seemed very sad. As the week went on, I felt like he got more and more optimistic. So, seeing him have hope inspires the rest of us to have hope.”

The Monday after Iowa announced its decision, Long gathered both teams and encouraged everyone to open up about what they were going through.

What he heard was encouraging.

“These athletes are incredible,” Long said. “They are going to come together — they already have. We know once we get going … There’s a solid group committed to staying here, training, and making it the best possible thing it can be. They are driven for that.”