With the discontinuation of Iowa’s swim and dive program looming, members of the swimming and diving community are questioning the legitimacy of Iowa City as a host site. 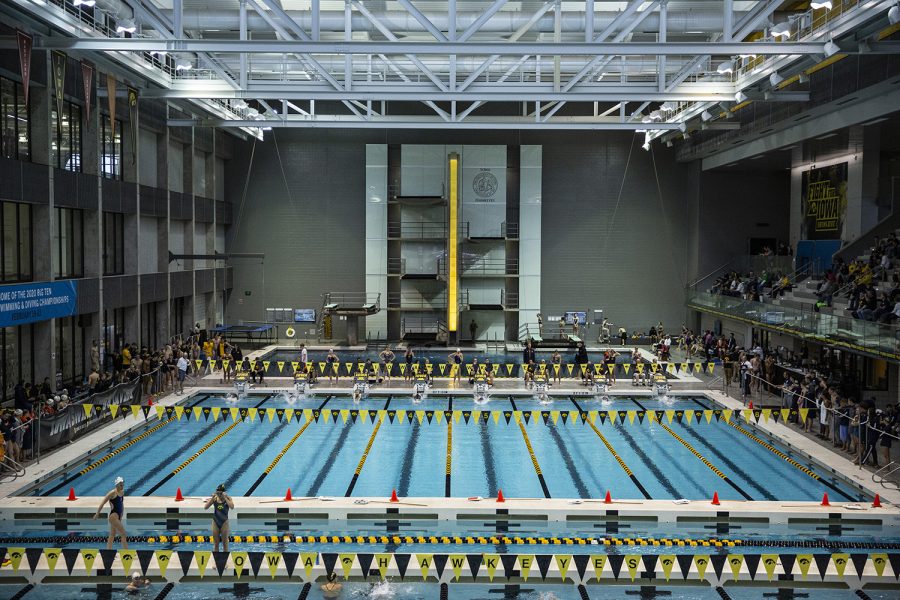 With the University of Iowa Department of Intercollegiate Athletics’ decision to discontinue four sports after the 2020-21 season came a bevy of interesting cogs.

With complex issues such as student-athlete health and wellness, scholarship eligibility, transfer eligibility, and coaching contracts seeping to the forefront of Hawkeye fans’ minds, one storyline seems to have slipped through the cracks.

Currently, Iowa is slated to host the 2021 NCAA men’s swimming and diving championships. Iowa’s world-class, $69 million swimming and diving facility– which received between $5 and $6 million in maintenance and restoration just last year– certainly warrants the opportunity for Iowa City to be a host site.

“We’re supposed to host [the NCAA men’s swimming and diving championships] this year, which is one of the biggest meets in the country,” UI swim and dive senior Sage Ohlensehlen said.

“It probably is the biggest meet in the country. There’s a bunch of people that feel right now that Iowa should not get to host that meet. Obviously when a school hosts a meet that big, they make a lot of revenue. It doesn’t really make sense to people why Iowa should make money off of the swimming community when they’ve disrespected it so badly.”

One of Ohlensehlen’s counterparts on the men’s team, sophomore swimmer Preston Planells, shared the same sentiment.

“Some days, I’m like, ‘oh it’s good, we’re showing what we have,’” Planells said. “At the same time, it’s like, ‘well, you’re getting rid of us.’ About a week ago, I would’ve probably been ecstatic. I’d probably be like, ‘yes, we’re about to show up. This is so amazing for the community.’ I think it’s just hard to swallow.

Iowa Director of Athletics Gary Barta noted in a video conference Monday that Iowa had notified the NCAA of its decision to cut the men’s and women’s swimming and diving programs.

“Immediately one of the things we did was notify the NCAA. So, they have our notification. They haven’t finalized anything, so we’ll see what their decision is.”

The NCAA has yet to make an announcement regarding the site status of the 2021 men’s swimming and diving championships.

In response to The Daily Iowan’s email request, the NCAA issued the following statement:

“As details regarding the Division I Men’s Swimming and Diving Championships become available, we will share with our membership and the public.”