Harreld spoke to USG Monday night, taking questions for senators and executives on the UI’s COVID-19 response and issues of racism and policing on campus. Members said Harreld did not adequately address their concerns. 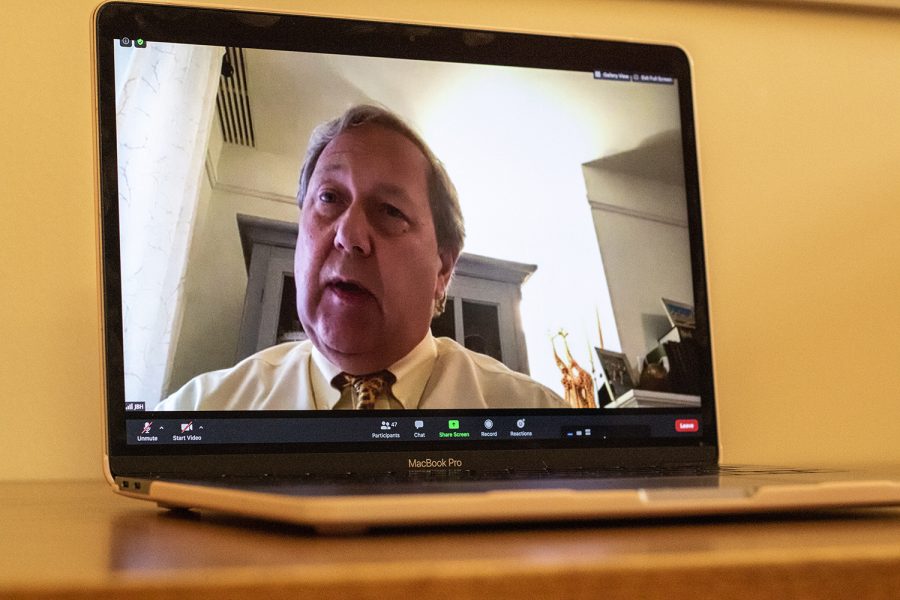 Undergraduate student government members said they felt no progress came out of meeting with University of Iowa President Bruce Harreld as he spoke to the group on COVID-19, in-person classes, racism on campus and more.

USG has released two statements demanding action from the UI administration in recent months, one in June calling for the UI to end its working relationship with the Iowa City Police Department, and one in August demanding the UI to move to virtual-only instruction.

Director of Justice and Equity Ruth Kahssai asked Harreld how Black students can trust his office and the UI to take their concerns seriously.

Harreld told Kahssai this was the first time he had heard of her bring up white supremacy to him.

“This is the first time you’ve ever talked to me about white supremacy. If you know of any white supremacists, please bring them forward,” Harreld said.

Kahssai told The Daily Iowan that this meeting was not the first time she had brought these concerns to Harreld, the Office of the President, and other administrative offices, and that aside from one meeting, Harreld had not been engaging with students on issues of diversity, equity and inclusion during the summer.

“His response is to say that I, as a Black woman, should go out and find the white supremacists, when a minute earlier I said that I was scared of that – I think that’s incredibly racist, ignorant and just harmful,” she said.

Kahssai said she felt that there was not real progress made from the conversation with Harreld, and that administration was coming to students to do the work of administrators.

“As a Black female student, these meetings are traumatizing to sit and experience consistent racism all the time,” she said. “We are also only students, so I really encourage people to get involved and engaged in this moment when we see these things – believe them at their forefront. It cannot continuously be on Black women or Black students or BIPOC students to be raising the alarms about everything.

LGBTQ constituency senator Joseph Haggerty asked how many students would need to contract COVID-19 before the university takes classes online.

While Harreld said the Critical Incident Management Team would decide when to take classes online, he said he was concerned that moving classes online would not prevent the spread of the virus off campus.

Harreld also said the number of cases reported in the residence halls — according to Monday’s campus report, 18 residence hall students were in quarantine — was under expectations, saying administrators thought they would be a “lightning rod” for the virus.

Haggerty called the meeting one of the top-three worst meetings he has had with the UI administration.

“One of the most shocking instances was hearing that they had expected that the residence halls would have a far higher rate of contamination and a far higher rate of COVID cases than what is already existing,” Haggerty said. “Frankly, we need to know what conversations are happening behind closed doors when students’ lives are in the way of financial gain for the university.”

Director of Sustainability Emily Maders asked Harreld why he has not responded to the statement USG issued calling for the UI to cut ties with the Iowa City Police Department.

Harreld said he received 412 emails asking for the UI to end its relationship with the police department.

Manders said in an interview with The Daily Iowan Harreld seemed dismissive and not understanding of Black students’ concerns, and said he was talking down to Black students that asked him questions.