Iowa Gov. Kim Reynolds at RNC: ‘This is an administration of action and outcome’ 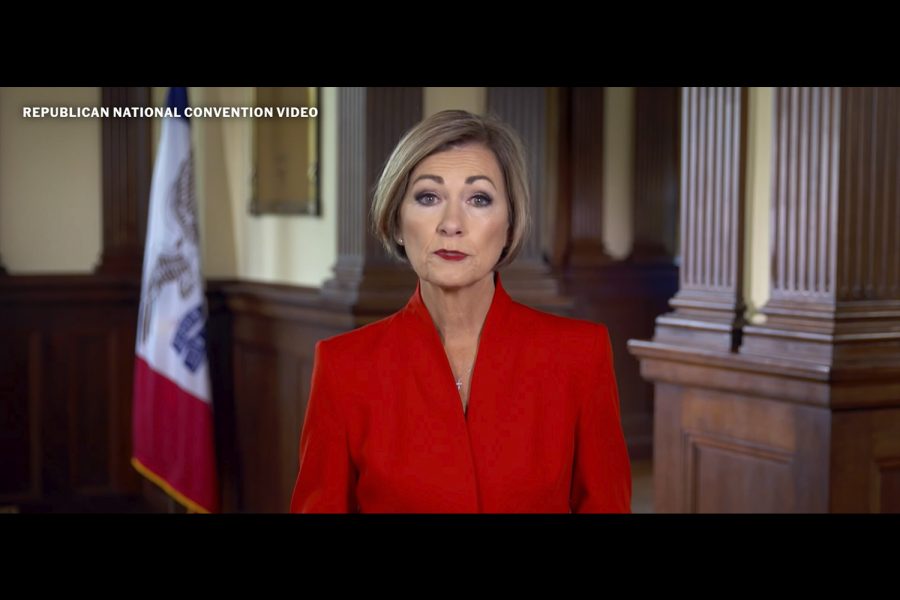 Iowa Gov. Kim Reynolds delivered a short speech at the Republican National Convention Tuesday night, praising President Trump for his administration’s response to the storm that tore through eastern Iowa two weeks ago.

“Iowans did what you expect Iowans to do,” Reynolds said. “They helped each other. They took care of each other, and they still are. But someone else had our back — our president. When the winds had finished raging and the cleanup had only begun, he showed up.”

On Aug. 10, a storm with hurricane-strength winds called a derecho knocked down trees, damaged homes, and ripped through corn and soybean fields in the Cedar Rapids, Marion, and Iowa City areas.

Reynolds commended Trump during her speech for approving her request for federal disaster relief in less than 24 hours. Trump partially approved Reynolds’ disaster declaration for $4 billion in aid on Aug. 17, which did not include funding for individual assistance.

On Aug. 20, Trump approved funding under the Federal Emergency Management Agency’s Individual Assistance Program, where Linn County residents can apply for assistance in derecho damage. According to Reynolds’ office, disaster assessments for other affected counties are still ongoing.

“The day after the storm, the president called to assure me that we had the full backing of the federal government, and later that week, Vice President Pence came to Iowa to again assure us that the president and his administration were behind us,” Reynolds said Tuesday.

Pence campaigned for Trump in Des Moines on Aug. 13, and also did not tour derecho damage.

Reynolds said during her speech that people may not know about Trump’s Aug. 18 visit to Cedar Rapids because “the national media didn’t report it.” The New York Times covered the visit last week, as well as PBS and USA Today.

The Daily Iowan reported on Aug. 18 that some Cedar Rapids residents were disappointed Trump did not tour storm damage or meet with affected Iowans. Instead, Trump only attended a briefing with other Iowa leaders that was broadcasted live on social media.

“The president — he cut through the bureaucracy to do what needed to be done, and to do it quickly,” she said.

Reynolds also praised Trump for “providing needed relief to farmers who were the target of China’s unfair trade practices” and for “hammering out new free and fair trade deals.”

Since 2018, Trump has given about $28 billion in federal assistance to farmers across the country affected by his trade practices with China. In 2018, Trump imposed tariffs on 800 Chinese products, and China imposed retaliatory tariffs on U.S. agricultural products, automobiles, and aquatic products.

The Chief Financial Officer of a dairy farm in Minnesota, Cris Peterson, also praised Trump in a speech on Tuesday for helping farmers through his Tax Cuts and Jobs Act, which she said helped foster a “booming economy.”

Tuesday marks the second night of the RNC. Trump will officially accept the nomination as the Republican nominee for president on Thursday. Sen. Joni Ernst, R-Iowa, will give a speech Wednesday.