Pre-existing conditions in patients should not factor into whether or not they receive life-saving care. 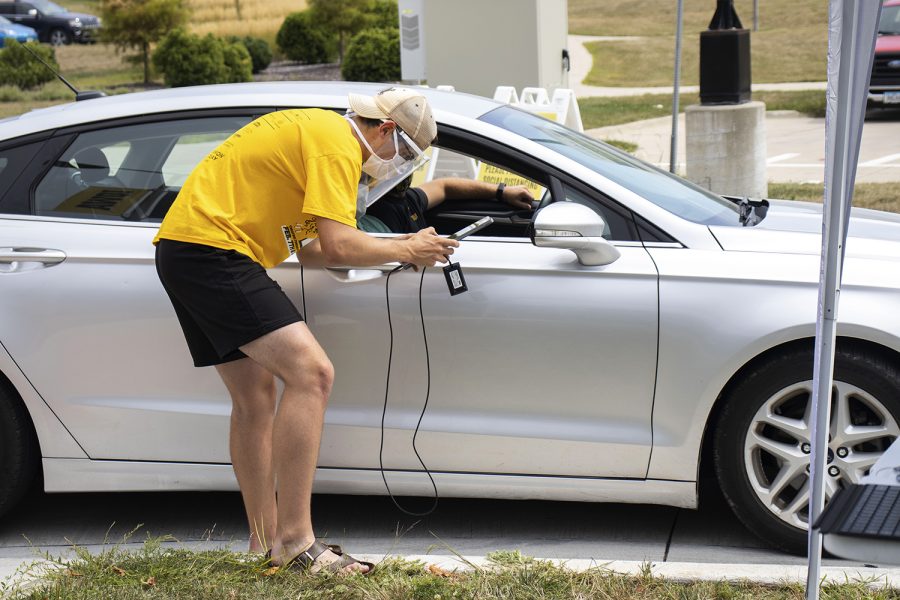 UI Student Life employee and incoming senior, Lucas DeWitt, hands out protective equipment kits on Monday, Aug. 10, 2020 in the parking lot of Hancher Auditorium. This was the first day that students living off campus could pick up their protective equipment kit provided by the university. Until the day before classes start, students will be able to pick up their PE kits in various locations on campus.

A quadriplegic man named Michael Hickson died from the coronavirus after being denied treatment. The doctors justified it by saying he did not have a quality of life.

Did they ask what Hickson thought about his quality of life? As far as I know, none of them know what it is like to live with quadriplegia. They don’t have the needed experience to make life or death decisions based on that.

Legally, this sets a bad precedent. By that logic, it is OK for health-care providers to deny COVID-19 treatment to someone with depression because their mental illness decreases “quality of life.”

Even people without pre-existing conditions have something in life which others can argue decreases its quality, but they should not be denied life-saving care.

The doctors do not know what type of advances will be made which make it easier to live with a disability. Technology might be able to help people with missing limbs be more mobile.

Unfortunately, Hickson will not get that experience.

Instead of letting people with pre-existing conditions die, the medical system should make living with them easier.

Some might argue doctors need to save resources for patients who are going to be fully healthy after recovery. People with pre-existing conditions are not going to be as healthy afterwards as those without. They will still have the other diagnoses.

People who have severe health problems — heart or lung conditions, weakened immune systems, severe obesity, and diabetes — are at a greater risk of getting the coronavirus. Elderly people are also at a greater risk.

The medical system should make sure it has enough resources for people who are most likely to get it, such as those with pre-existing conditions and of an older age. Denying care to those in at-risk groups cures no pandemic.

Roger Severino, the Office for Civil Rights director, said it goes against the Americans with Disabilities Act and Affordable Care Act which protect the elderly and people with disabilities from discrimination when needing medical care.

ADAPT, an Austin disability advocacy group, filed a complaint about this incident to the federal Office for Civil Rights at the Department of Human Health and Services. The National Council on Independent living filed a similar complaint with the Office of Civil Rights, asking for an investigation.

Texas Reps. Republican Chip Roy and Democrat Joaquin Castro, both spoke out against this injustice. Castro said Hickson’s death “should be investigated immediately.”

Melissa Hickson, his wife, say while the decision might have been made based on race, the main reason was disability. Still, it’s just as unethical to refuse care because of race.

The doctors thought it was somehow cruel to give him treatment because of his condition.

It’s cruel and stigmatizing to not save someone’s life because of a disability. Denying COVID-19 treatment denies our humanity, value, of us and our loved ones.

People of color and pre-existing conditions should not be denied basic human rights, which treatment for any illness is. Since America is in the middle of a pandemic, its health-care system should do whatever it can to save lives instead of finding reasons not to, whether it’s in Texas, Iowa, or anywhere else.