The Iowa men’s gymnastics, men’s and women’s swimming and diving, and men’s tennis programs will be discontinued at the end of the 2020-21 academic year. 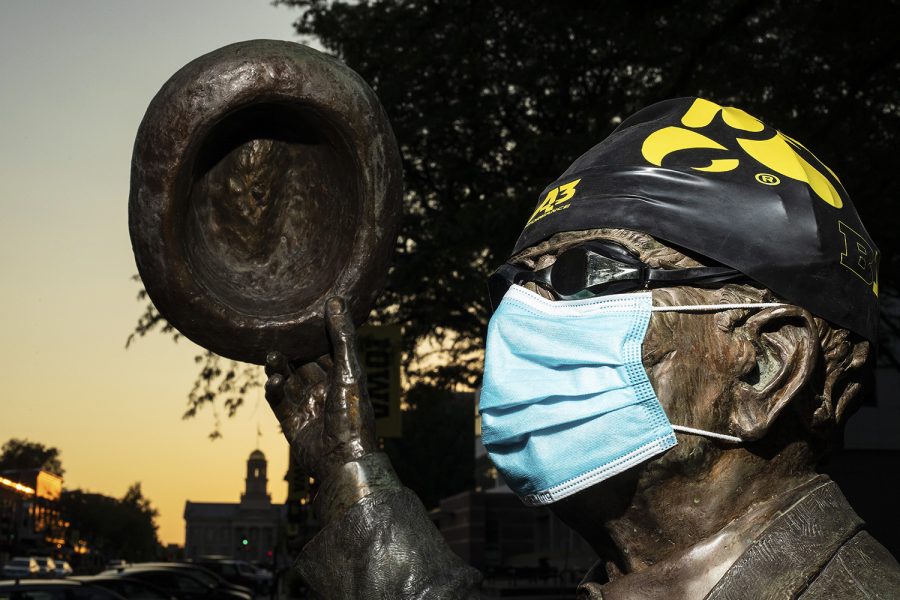 A statue clad with swim cap, goggles, and face mask depicting former historian and University of Iowa athlete Irving Weber stands near the Van Allen building on Sunday, August 23, 2020, two days after the decision by the University of Iowa to cut the men's and women's swim and dive program along with men's gymnastics and men's tennis. While known for his work as a historian in Iowa City, Weber also maintains importance as the first All-American swimmer at Iowa, gaining the status in 1922 in the 150 yard backstroke. (Ryan Adams/The Daily Iowan)

University of Iowa President Bruce Harreld and athletic director Gary Barta announced in an open letter Friday that Hawkeye men’s gymnastics, men’s and women’s swimming and diving, and men’s tennis programs will be discontinued at the end of the 2020-21 academic year.

After the Big Ten announced Aug. 11 that fall sports in the Big Ten were postponed due to the COVID-19 pandemic, Barta said that he is anticipating $100 million in lost revenue and an overall deficit of between $60-75 million.

The move cuts four programs that have been around for decades.

The Iowa men’s swimming and diving program dates back to 1917. David Armbruster, the first coach in program history, is credited with developing the butterfly stroke. A bronze statue of NCAA champion swimmer Jack Sieg doing the butterfly sits in Iowa’s Campus Recreation and Wellness Center.

Five Hawkeye swimmers have earned Olympic medals, the most recent being Rafal Szukala winning silver in 1992 in the 100 fly. Wally Ris won gold in the 100 free in 1948.

The Hawkeye swimming and diving programs have produced a total of 30 Olympians.

Irving Weber, among other career accomplishments, was Iowa swimming’s first career All-American. A statue of him is located near the Old Capitol in Iowa City.

The men’s program has won three Big Ten team titles. The women’s program dates back to 1974 and is the youngest of the sports to be cut.

In 2010, the $69 million recreation center was built. The Iowa athletic department supplied $9 million for the project. The facility is considered to be one of the best in the country and features an Olympic-sized pool.

The recreation center is currently designated to host the 2021 men’s swimming and diving NCAA Championships.

The Iowa men’s gymnastics program, like the swimming programs, also has a long history. Its first season was in 1922. Men’s gymnastics is the only sport being cut that has won an NCAA team title, which it did in 1969. Iowa finished No. 9 in the final poll of the 2020 season.

The Iowa men’s tennis program goes back as far as any of the teams that were cut. The first recorded competition for the team was in 1898. Men’s tennis doesn’t have the same level of accomplishments as the other sports that were cut, but the spring 2020 season was setting up to be the best in program history before COVID-19 ended it early.

Iowa was ranked No. 20 in the ITA Division I National Rankings released on March 10. It was the highest ranking in program history.

Barta and Harreld wrote in the letter that the decision to cut these programs specifically was made after considering factors such as sponsorship at the NCAA Division I level, impact on gender equity and Title IX compliance, expense savings, history of the sport at Iowa, and engagement level.

Multiple petitions have surfaced online in an effort to save these sports. A petition titled “Save UIowa Swim & Dive” has over 13,000 signatures. A similar petition was created by All-Big Ten tennis player, Iowa senior Will Davies. He created the “Save Iowa Men’s Tennis” petition and posted it on Twitter.

“Calling out to the Hawkeye community,” Davies’ post said. “My teammates and I are absolutely gutted by [Friday’s] decision to cut the top 20 tennis program. Please spare 10 seconds of your time to sign our petition.”

Iowa has said these cuts are final.

Each of these teams will have the opportunity to compete in their upcoming 2020-21 seasons, should the circumstances surrounding COVID-19 permit, before they are discontinued at the varsity level.

Iowa now has 20 varsity sports after the cut, still above the Big Ten threshold of 16.

Barta will hold a video conference at 2 p.m. on Monday. Follow The Daily Iowan for updates.