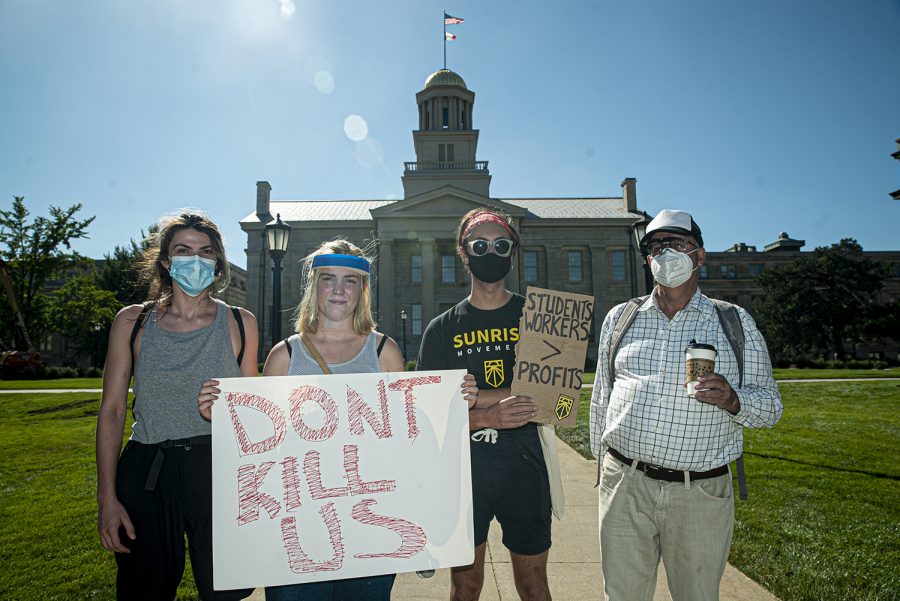 Protesters Ayla Kanin, Eva Sileo, Zach Grewe, and Joe McKenna pose for a portrait in front of the Old Capitol Building in downtown Iowa City on Wednesday, Aug. 19, 2020. The Campaign to Organize Graduate Students (COGS) led a march to President Bruce Harreld's home in order to protest the administration's insistence that the university remain open despite the health risk posed by COVID-19.

As thousands of students move into University of Iowa residence halls this week, and the first day of class approaches, a group of roughly 90 protesters took to the streets, demanding all classes move online for the Fall 2020 semester.

The protest, led by Campaign to Organize Graduate Students, started on the Pentacrest lawn in front of Schaffer Hall, some wearing COGS shirts or holding signs with phrases like, “We are not expendable” and “people > profits.”

In an email to The Daily Iowan, Assistant Vice President for External Relations Jeneane Beck said, “The University of Iowa does not negotiate with collective bargaining groups such as COGS; those negotiations occur with the Board of Regents, State of Iowa.”

“The university values the feedback of students and faculty. With more than 30,000 students and thousands of faculty and staff at the UI, opinions vary regarding how our campus should operate for the fall semester,” Beck said. “The UI’s goal is to provide as much choice and certainty as possible to the campus community while aligning with guidance from the Board of Regents, State of Iowa; the Iowa Department of Public Health (IDPH); and the Centers for Disease Control and Prevention (CDC).”

The group marched up Clinton Street to UI President Bruce Harreld’s house. As they walked, they chanted for online classes, saying “Go online. Save our lives” and “Face to face: it’s a disgrace.” One marcher beat a drum as they marched. The crowd was followed by 10 cars that honked in support and volunteer security stood in front of other cars at intersections to protect protestors.

John Jepsen, the COGS member and UI grad student that held the protest, stopped the group in the middle of an intersection along their way. As the lights changed and cars were stopped, Jepsen took the time to acknowledge the 172,000 people that have died from COVID nationally, 1,000 of them from Iowa.

“Did anybody here sign up to die?” He asked the crowd.

When they reached the president’s house, the group chanted, “Bruce resign, or go online.”

On the front steps of Harreld’s house, graduate students, undergrads, UI faculty and staff, and community members shared their fears surrounding the UI’s response to COVID-19.

Eva Sileo, a UI senior studying biology, described reading the news to stay up to date on the virus, and said the coronavirus was consuming a great deal of her academic and emotional energy.

She said she worries for her mother, an immunocompromised supportive staff member at UI; her sister, who attends public school; her coworkers at the hospital, her fellow undergraduates, and graduate students.

Sileo said the deaths were preventable, and that Harreld and the Board of Regents need to heed the advice of experts so more people don’t get sick.

“We want to say first of all the reason we are here is only because the university and Bruce Harreld failed us. They had five months to come up with a real plan, to come up with a way to protect us and our community and they failed,” Knipp said. “Each and every person in this town is at risk because of Bruce Harreld, the Board of Regents, and the administration of the University of Iowa.”

The rally was the latest action taken by graduate students advocating for virtual learning.

On Aug. 4, a group of instructors, including teachers’ assistants, shared a pledge committing themselves to providing virtual learning in the upcoming semester. The pledge had received 280 signatures. They also published a petition available to the public, demanding the university hold all classes online and require remote work whenever possible.

On Aug. 11, while UI administrators held a press conference inside the IMU, graduate students protested outside of the building.

“Their plan leaves several questions unanswered, and last week’s press conference with university administration produced little new information about how the university is planning on controlling and responding to a potential outbreak of COVID-19 on campus,” COGS member and PhD candidate Hadley Galbraith said in a press release. “We stand in solidarity with undergraduate students, staff and faculty members, and members of the community, as we are all threatened by the university’s current plans.”