In the second night of protests, students and community members took to the streets to protest in-person instruction at the UI. 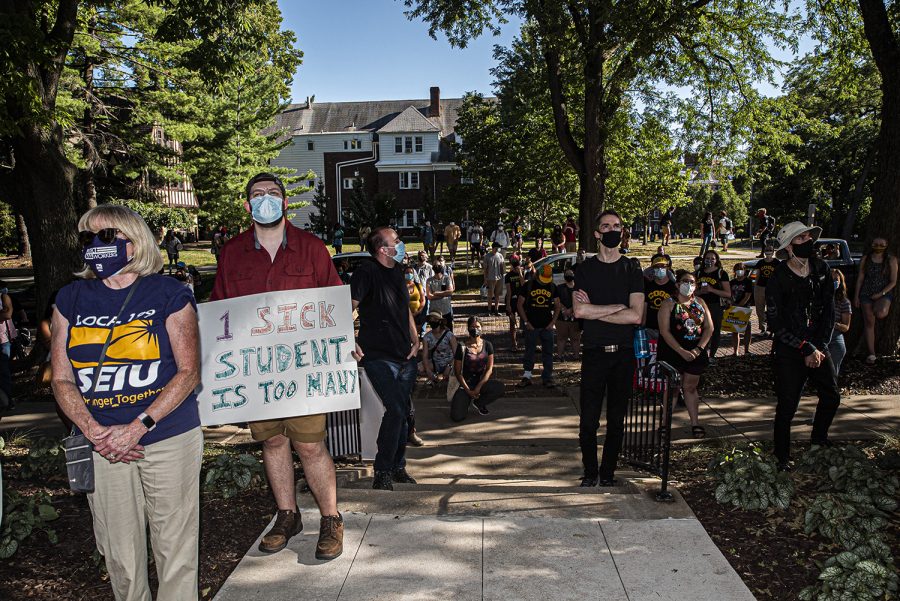 Protesters stand outside of University of Iowa President Bruce Harreld's home as part of a demonstration on Wednesday, Aug. 19, 2020. The Campaign to Organize Graduate Students (COGS) led a march to Harreld's home in order to protest the administration's insistence that the university remain open despite the health risk posed by COVID-19.

Three student labor and action organizations shut down intersection traffic on Riverside Drive Thursday night to protest face-to-face instruction, calling for the University of Iowa to shift to online education, and reduce tuition in light of COVID-19.

Members of Iowa Student Action, SEIU Local 199, and Campaign to Organize Graduate Students marched holding banners reading “Board of Regents: Our Blood, Your Hands” and other calls to action, blocking traffic beginning at 5 p.m., according to Iowa Student Action’s twitter account.

This protest, led by Iowa Student Action, is one of many that have occurred on the UI campus since the university committed to a hybrid online and in-person semester.

The UI reported on Wednesday that 72 percent of undergraduate classes will be held online, 16 percent face-to-face, and 12 percent blended instruction, which combines an online component and in-person discussion.

Dulce Escorcia, Iowa Student Action protest organizer and UI student, said protesters came out to share their stories and express their anger toward the decision to hold in-person classes.

“I haven’t even processed the fact that in four days classes start. I’m too scared to even think about it and I’m too scared to like to think about what’s going to happen to me and my roommate. And that’s on COVID-19 getting me sick and not being able to breathe in the long term or possibly even die,” Escorcia said.

Iowa Student Action Communication Lead Sara Castro said the protesters were calling out UI President Bruce Harreld and the Board of Regents for opening the campus in a time when it is unsafe to do so.

“Even though they know it’s going to be unsafe when students are going to die, we know that they’re only opening campuses because they just want to make money off of us,” Castro said. “They don’t have enough testing centers. They’re not even testing before they have moved into their residence halls.”

Iowa Student Action said on Twitter that the organization was calling for all Iowa campuses to close until it was safe, and also demanded reduced tuition during the pandemic.

The UI negotiates with the state Board of Regents, not with collective bargaining groups such as COGS.

“The university values the feedback of students and faculty. With more than 30,000 students and thousands of faculty and staff at the UI, opinions vary regarding how our campus should operate for the fall semester,” UI Associate Vice President for External Relations Jeneane Beck said in an email earlier Thursday. “The UI’s goal is to provide as much choice and certainty as possible to the campus community while aligning with guidance from the Board of Regents, State of Iowa; the Iowa Department of Public Health (IDPH); and the Centers for Disease Control and Prevention (CDC).”

The group tweeted that one sick student, faculty, staff, or community member is too many, and that the university will be responsible for putting every community member’s life at risk for profits.

Iowa Student Action leader K Trainor, a former UI student studying printmaking, said that she did not feel comfortable with lack of social distance space at the university. She will not be returning to the UI this year, and said she lost all of her university-funded scholarships.

“Students should not have to lose their financial aid because you’re making [this] choice,” Trainor said. “President Harreld says that everyone has a choice. And I say, you know, what good is a choice if it’s a false choice?”

The Board of Regents and the university continue to be optimistic that modified face-to-face instruction can succeed. President Harreld and Interim Provost Kevin Kregel said in a welcome letter to students on Thursday that COVID-19 caused circumstances that the UI community has never experienced before.

“Rest assured that Iowa staff have been diligently preparing the past several months for the return of students and educators,” Harreld said, “…and we are ready to begin an exciting new year of learning and discovery.”

As of Thursday, there have been 54,533 cases in the state of Iowa and 2,311 in Johnson County, according to the Iowa Department of Public Health. Iowa also has reported 1,016 coronavirus-related deaths.

In a letter from University Housing and Dining on Thursday, students and employees are being asked to self-report a positive test to aid in containment efforts, so the university can assist with academic and work arrangements.

Students must self-isolate according to Centers for Disease Control and Prevention (CDC) guidelines:

The UI will release the number of self-reported cases each Friday beginning Aug. 28 in its COVID-19 campus update.