Barta said the department is looking at an overall budget deficit of between $60-75 million and that it is "working hard to find solutions." 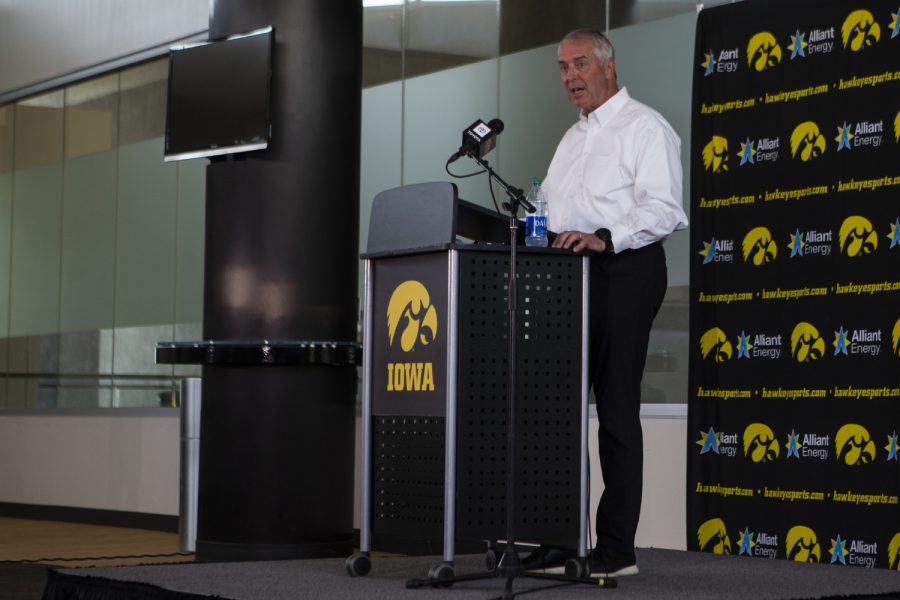 Iowa Athletic Director Gary Barta speaks at a press conference on Monday, June 15 at Carver-Hawkeye Arena. Barta addressed recent action within the Iowa Athletic Department, including the separation agreement with Chris Doyle, as well as plans for the future.

In the letter, Barta said the department is “working hard to find solutions” and that the decisions ahead will be very challenging.

“We recognize the conference’s decision will have a major financial impact on not only our athletic department, but the many businesses that rely on Hawkeye events to support their livelihoods,” Barta said.

Hawkeye athletics had an operating revenue of $152 million for the 2019 fiscal year. After $146.3 million in expenses, it made a $5.7 million net surplus.

The Big Ten presidents and chancellors voted Aug. 11 to postpone all fall sports seasons in the conference until the spring due to the COVID-19 pandemic.

Following the announcement, parents of football players from multiple schools in the conference, including Iowa, have sent letters to Big Ten Commissioner Kevin Warren asking for more clarity in the conference’s decision. Ohio State quarterback Justin Fields is leading a “We Want To Play” campaign on Twitter. Fields posted a petition Sunday asking the Big Ten to reinstate the football season. The petition has reached over 240,000 signatures in just over 24 hours.

Warren has yet to respond to the letters or Fields’ petition.

“We have said from the beginning, the health and safety of our student-athletes, coaches and staff is our priority,” Barta said in the letter. “Our athletics department is fortunate to have the expertise and guidance of our medical team and partners at University of Iowa Health Care. Unfortunately, the conference determined there were still too many uncertainties to move forward with fall sports.”

Following the Big Ten’s announcement, Barta said that the University of Iowa supports the “extremely difficult” decision made by the conference.

Iowa football season ticket holders that would like a full refund can receive one, Barta said. The money could also be applied to 2021 tickets, and season ticket priority and seat locations are guaranteed for next year.

As for what is next for the department pertaining to winter and spring sports, and the potential for football and other fall sports to be played in the spring, Barta said in the letter that the next steps will include:

“Our commitment to our student-athletes and their education at the University of Iowa remains at the forefront of our mission.”
“The Big Ten Conference and our athletics department staff will work diligently on the winter and spring sport seasons. We’ve learned a lot about the virus since March. It’s critical we find answers to the health and safety concerns that led to the shutdown of our fall sports.”
“Simultaneously, the process will begin to explore how a spring season for fall sports would work.”
“We have to finalize a plan to guide our department through significant financial challenges associated with this pandemic.”