5,500 students to move into University of Iowa residence halls this week

5,500 students will move into the UI’s residence halls this week, where closed dining halls, mask requirements and social distancing are the new normal. 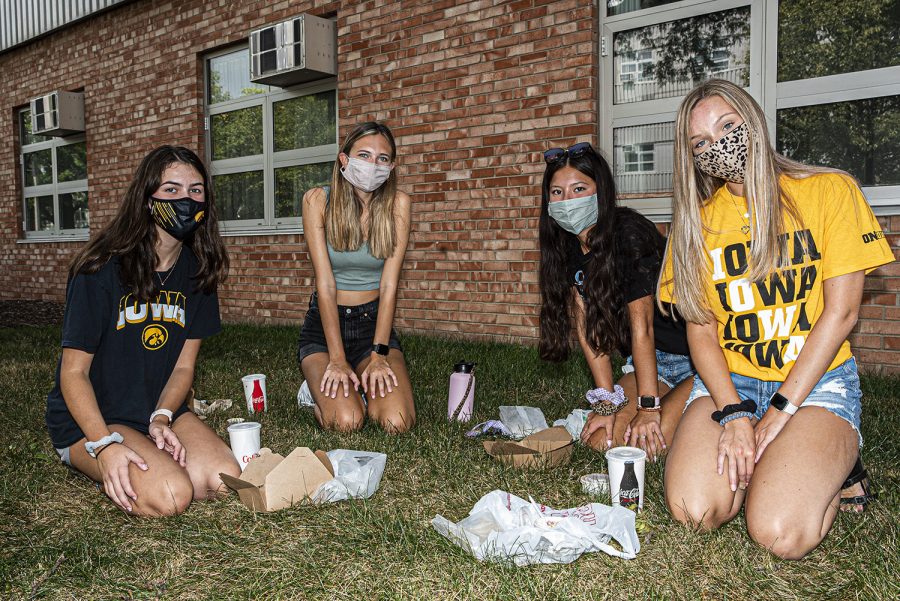 University of Iowa freshmen Calista Smith, Natalie Duran, Annika Thoa, and Claire Enyart pose for a portrait in front of Burge Residence Hall on Monday, August 17th, 2020. The university is currently attempting to adjust their housing and orientation plans around the Coronavirus pandemic to maintain health and safety. (Tate Hildyard/ The Daily Iowan)

Move-in at the University of Iowa’s residence halls looked quieter than previous years, with restrictions on guests and only 20 students allowed to move into each hall at a time, though students said they still found ways to socialize masked up and outside.

As students moved in on Monday, the UI released metrics for when to take classes online before Thanksgiving break, including residence hall occupancy as one of the metrics. In an email to students on Monday, it said the UI is “prepared to make difficult decisions about the fall semester if necessary.”

In listing the metrics, campus officials would consider the number of new cases, percent of positive tests, and cases at other Iowa universities. Availability of child care, and the status of Johnson County schools would also be considered.

Students are required to wear a mask if they are not in their own room, and dining halls are take-out only. Residents are only allowed one guest in their room at a time.

The first week on campus for new students will look different than in years past, with OnIowa! events being held mostly virtually, except for a few small group sessions held in-person.

At Iowa State University, at least 141 students tested positive before moving into the residence halls. The UI is not testing students before move-in.

Senior Director of Housing and Dining Von Stange told reporters on Monday that the UI is following CDC guidance in not mass testing incoming students.

“The CDC doesn’t recommend testing because it really gives students a false sense of security because they may have it but test negative because it hasn’t gotten to that state,” Stange said. “Our goal is to make sure people are reporting and that Johnson County Public Health is doing contact tracing, and that we are doing quarantine and isolation.”

Stange said there is space set aside for quarantine housing in nearly every residence hall, and Housing and Dining will attempt to keep residents in isolation “on the same side of the river” as their home residence hall.

Stange said who will be informed when a student tests positive in a residence hall depends on contact tracing guidelines from Johnson County Public Health.

“Obviously the roommate will know because of contact tracing, but other than that we’re not sending out notices to the floor or anything like that,” he said.

With dining hall seating closed, first-year Hawkeyes gathered outside Burge Hall and on the T. Anne Cleary, on Monday holding takeout containers of dining hall food in their laps. Some students were gathered with roommates and friends, while others ate on benches alone. A few students shot hoops on the basketball court.

Some students said they felt residents were taking social distancing seriously in the residence halls, while others said they had observed crowded gatherings in the rooms.

Katlynn Long, a first-year student from Greenfield, Iowa, moved into her room in Burge Hall over the weekend.

She said students she’d seen were taking precautions to prevent the spread of the virus.

“As far as I’ve seen everybody has been really good about wearing their masks even in the halls and the elevators. That does calm my nerves about it a bit, but I know that there still are going to be people who are partying where not it’s not really as required,” Long said.

Annika Tjoa, a first-year from New Hartford, Iowa, said students in her dorm were not adhering to the restrictions put in place.

“It’s hard because we’re paying a lot of money to be here, and part of that is meeting people,” she said. “We’re stuck wanting to meet people and hang out and do normal college things, but we don’t want to make [the pandemic] worse.”

“Our goal is to be educational, but certainly if there are repeated attempts and they’re not responding to the education, we will send them to the Dean of Students office for documentation and some resolution that way,” he said.

Some students expressed confusion about how the semester would run, wondering if they would be allowed to use study spaces in the library and where they would eat meals once it’s too cold to eat outside.

“I feel like we haven’t had a lot of communication from the school so far. It would be nice just to know a little more and every time we try to reach out and ask, it’s the same email every time,” first-year student Natalie Duran said.

Jake Perez, a first-year from Chicago, said he trusted the university to handle the pandemic on campus, but was disappointed to miss fall sports. The Big Ten announced last week all fall sports would be postponed until the spring.

“I was really hoping for a football season, but I understand why it’s not really possible right now,” he said.

Stange said although students may not get to have the campus experience their older siblings or friends had before them, students will still have opportunities to make connections on campus.