The group wrote a letter in The Players' Tribune that expresses "the concerns of over 1,000 Big Ten football players." 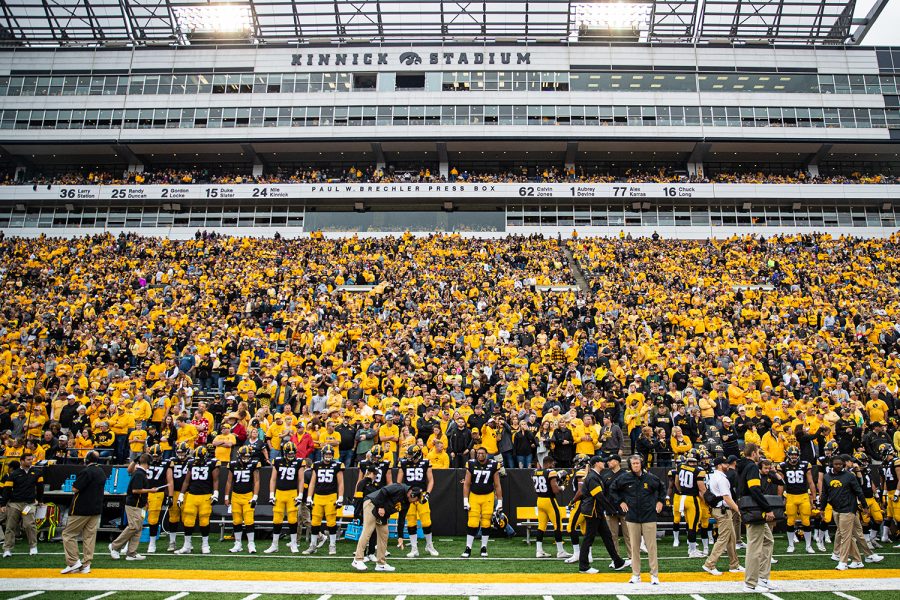 Football players from the Big Ten followed the lead of Pac-12 players in forming a unity group and publishing a list of demands related to the COVID-19 pandemic and player safety.

The list of demands was published in a letter in The Players’ Tribune through a group called College Athlete Unity (CAU) shortly after the Big Ten released its new testing and medical protocols and 2020 football schedule Wednesday morning. It was written by “the players of the Big Ten” with the title #BigTenUnited and expresses the “concerns of over 1,000 Big Ten football players.”

“While we appreciate the Big Ten’s recently announced plan for the upcoming season, we believe that the conference’s proposal falls short in certain areas,” the players wrote. “Given that the players are the primary stakeholders in the business of college sports, we believe any course of action moving forward needs to include player input.

“We are deeply disappointed with the lack of leadership demonstrated by the NCAA with respect to player safety during the COVID-19 pandemic. We believe that the NCAA must — on its own and through collaboration with the conference — devise a comprehensive plan to ensure the safety and well-being of players leading up to and during the upcoming fall season.”

The Big Ten players’ demands, which are said to be focused on protecting the well-being of student-athletes, include several of the same topics addressed by Pac-12 football players in a similar letter published in The Players’ Tribune on Sunday.

Cornonavirus testing, contract tracing, and social distancing procedures are among the concerns addressed by the players.

“The NCAA — which is known for its zeal for regulations and enforcement — has had ample time to prepare for the safe return of its athletes to competition, yet it has done nothing,” the players wrote. “Its laissez-faire approach is forcing each conference and each school to create its own plan, resulting in inconsistent policies, procedures and protocols.”

The players’ proposal is broken down into five different sections with separate demands:

The Big Ten released medical protocols Wednesday that among other things includes athletes being tested for COVID-19 at least weekly and 14 days of quarantine for an individual who tests positive or is suspected of having the virus.

“Developing consistent medical protocols and testing procedures for the health and safety of our student-athletes and our athletic programs is critical,” Big Ten Conference Commissioner Kevin Warren said in a release. “Our Task Force for Emerging Infectious Diseases and local, state, and national experts have provided guidelines throughout our decision-making process with our student athletes’ health and safety as our first and foremost concern.”

Among the players’ are demands are:

Oversight and transparency
A third-party, approved by players, to administer COVID testing and to enforce all COVID-19 health and safety standards.
Sufficient penalties for noncompliance.
Mandate for athletics personnel to report suspected violation.
Prevention and safety protocols
Ensure all athletes have up-to-date information about the risks that COVID-19 may pose to their personal health, the health of their families, and the health of their communities.
Adherence to WHO and CDC guidance for sporting events and compliance with all federal, state, and local statutes and regulations.
Safety standards that are appropriate for each sport.
Social distancing requirements and mandatory mask-wearing in and around athletic facilities by coaches, staff, players, vendors, press, and visitors.
Minimum cleaning and sanitation protocols for all uniforms, equipment, and athletic facilities, including visitor locker rooms.
Temperature checks for anyone entering any athletic facility.

As far as testing, the players demand that everyone who comes into contact with college athletes, including “coaches, trainers, medical staff, nutrition staff, referees, media, etc” be tested three times per week during the season.

Based on the results of the tests, the players demand immediate quarantine for any person who tests positive or exhibits symptoms, as well as quarantine rules for college athletes who test positive, and protocols for their return to competition.

The new Big Ten football schedule beings Sept. 5, earlier than the other Power 5 teams who have released schedules.

The SEC and Pac-12 have said they will start their seasons on Sept. 26. The ACC will begin games the week after the Big Ten. The Big 12 has yet to release a schedule.

The Big Ten players wrote that they want “objective criteria for shutting down seasons should the pandemic take a turn for the worse or if teams experience significant outbreaks.”

In the past week, two Big Ten football programs — Rutgers and Northwestern — have paused voluntary workouts after outbreaks of COVID-19 among players and coaches.

the Division I Presidents Council has not yet come to a decision.

The player assurances and economic support that the players lay out in their letter includes:

Whistleblower protections for athletics personnel and college athletes reporting a suspected violation.
Ban of the use of COVID-19 liability waivers.
Automatic medical redshirt for any player who misses any competitions due to a positive test or a mandatory quarantine due to contact tracing.
Preserve athletic eligibility, scholarship, and roster spot for any player who opts out of athletic participation or is unable to play more than 40 percent of their scheduled season due to COVID-19 or season postponement/cancellation.
Complimentary access to the Big Ten Network for the athletes’ family members.
Coverage for all out-of-pocket medical expenses related to COVID-19 (both short term and long term) incurred by active college atheltes.
Scholarship protections (including room, board, and stipend) in the event that the season is canceled due to COVID-19.
An adjustment to the cost-of-living stipend to account for the increase in personal expenses related to limited access that players have to facilities.
Reimbursement for stipends that were reduced during the summer.

Michigan’s Hunter Reynolds and Minnesota’s Benjamin St-Juste are listed as contacts for the Big Ten players group. They are the only players mentioned by name in the letter.