International students compare the responses of their home countries to COVID-19 to that of the U.S, saying they are concerned for students to return to the UI campus in late August. 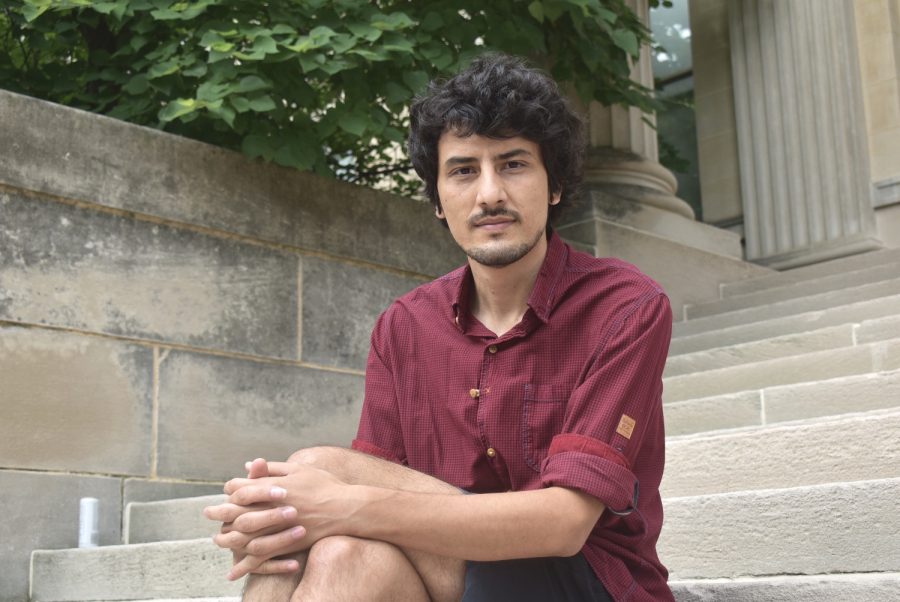 UI graduate student Ramin Roshandel poses for a portrait outside on Sunday Aug. 2 2020 outside Shaffer Hall. Roshandel is currently working on his Ph.D. in music composition.

Some international students at the University of Iowa are concerned about the return to partially in-person instruction and have expressed dismay at the United States’ response to the coronavirus pandemic.

U.S. Immigrations and Customs Enforcement announced on July 8 that students taking online-only classes would be forced to leave the country or transfer to a school offering in-person instruction. ICE rescinded this policy on July 11, after several higher-education institutions in the U.S, including the UI, pushed back against it.

New international students planning to enroll in online-only classes for the fall semester, however, are barred from entering the country.

For some international students, remaining in the U.S. was their only option for academic reasons or because of travel bans.

UI graduate student Ramin Roshandel, who is working on a Ph.D. in music composition, is originally from Iran — which is among a list of countries banned from entering the U.S. due to coronavirus concerns. Roshandel said he is still uncertain about whether he can re-enter to the U.S. if he were to return to Iran.

The guidance from ICE came as a shock to both international students and his American friends, as well, he said.

“After the first one got canceled, the new [order] now prevents new students from entering,” he said. “It is really unfortunate, and for me, it was unimaginable. I would go to Iran to renew my Visa, and then it would be impossible to come back, which would impede on my studies.”

Roshandel said the way Iran and other countries are handling the pandemic is vastly different from how the U.S. has implemented health guidelines in response to the virus.

Iran declared a national mandate for wearing masks in public on July 6. Roshandel said the mandate would keep citizens partially safe during the Mourning of Muharram, a religious event in which all citizens congregate to perform various rituals, where there would be an inability to properly maintain social distance.

“The pandemic is getting worse and all the people were expecting the [Iranian] government to do something — cancel the event,” Roshandel said. “Everyone is getting to the point where it is up to you if you want to go to the event. For this specific occasion, [the government] does not care. They prioritized the religious events over the health of their citizens.”

UI graduate and master’s student Inga Popovaite is from Lithuania. She said her parents are scared for her to remain in the U.S. due to the number of people failing to follow public health guidelines.

“My parents cannot understand why Americans do not want to wear masks,” she said. “It helps. It might be an inconvenience, but you are not going to die from wearing a mask. You could die from not wearing one, or worse, someone else could.”

She added that it is hard for people in Lithuania to understand how U.S. citizens believe wearing masks is a political issue and not a public health issue.

“All countries have political divisions,” Popovaite said, “ … But when it came to public health, the government in Lithuania mandated masks. And they are not a government that the majority of citizens like. They took it as a public health measure and not a political issue.”

Popovaite said the way the U.S. is handling the pandemic is similar to how the Soviet Union responded to the Ukranian Chernobyl disaster in 1986. Though she was not alive at that time, she said it’s an event that Lithuanians largely remember as lacking proper government response.

“People and officials went on living like nothing was happening,” she said. “There was no news about it. Now, in the U.S., the people in power … are making it political and about re-election. The current discourse comes from both Iowa and the White House, and our [U.S.] government is doing nothing and not making any public health measures.”

Popovaite said the number of students returning to the UI campus from across the country is a cause for concern among international students.

“I know [online classes] are not fun, and university is not just about what you learn in the classroom, but the connections you make outside the campus life, and that campus life is important,” she said. “But I wish the administration would be brave enough to say ‘We love the Hawkeyes, but a live Hawkeye is better than a dead Hawkeye.’”

“International students will be walking into the worst national outbreak in the world,” Baker said. “There are very few other countries that are experiencing a surge in case counts. The U.S. is more concerned with policy than public health, and it was slow on the uptake.”

She said a national mandate would acknowledge that public good needs to proceed over individual choices.

“This is a disease that is not just you taking risks upon yourself if you refuse to abide by public policies,” Baker said. “You could affect people against their will. National mandates are ideal, but there are some setbacks. Some places, the disease could be rare, and extreme shutdowns and mask mandates may not be recommended.”

She said the U.S. could do a better job of seeing how other countries have handled the pandemic to try and reduce the number of cases, and that citizens should take it upon themselves to notice how other populations are abiding by public health practices.

“[Anthony Fauci] said in countries that have steady decline rates, they acted early to shut down venues and implement policies,” Baker said. “In the U.S., there is a greater population that is not practicing social distancing. We as a country are in for a very long pandemic unless we instill a national mandate or get saved by a miraculous vaccine.”