A new student organization at the University of Iowa will feature works by LGBTQ authors. The group’s goal is to create a more inclusive environment and hopes to ignite a discussion around stories and people that are often overlooked in school curriculums. 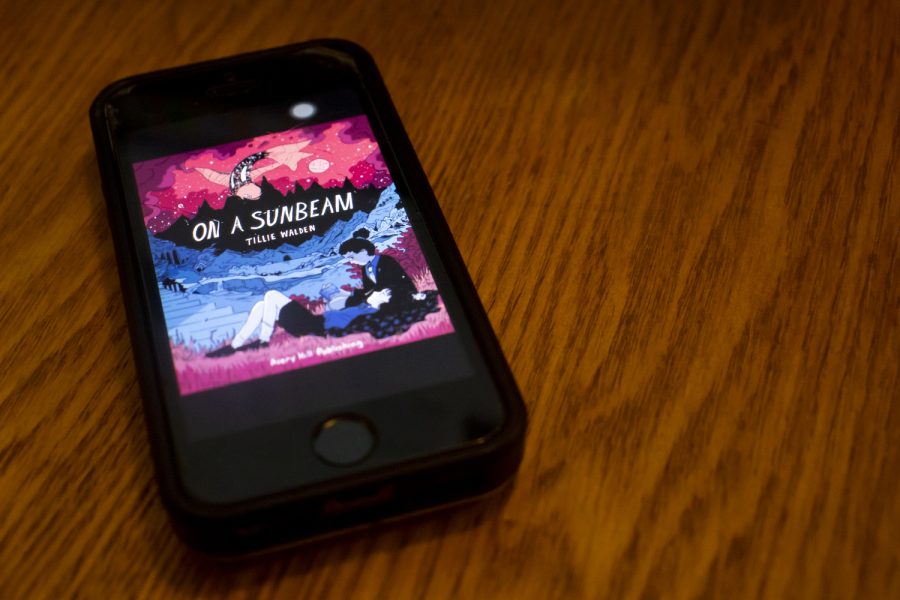 Cover art for On A Sunbeam, a graphic novel by Tillie Walden, is seen from a phone screen on Thursday, July 23, 2020. On A Sunbeam is one of many titles included on the reading list for a new LGBTQ+ book club on campus.

While stuck inside this summer, University of Iowa student Corinne Hoffman decided to do her part to bring the campus community together in the fall through a common interest: reading. Hoffman will lead an LGBTQ book club starting in August, featuring books penned by LGBTQ authors.

The idea stemmed from an observation that, in her experience, recognition of LGBTQ people in literature is somewhat lacking in her local community.

“I didn’t really live in an area where there were a lot of “out” people or there wasn’t really a community there,” she said. “And so I kind of found that with reading books. It connected me to other LGBT people and helped me feel less alone, and it felt like a big comfort. So I was hoping to share that with other people, other students at Iowa.”

The featured books will star characters belonging to the LGBTQ community as well. Hoffman said she wants to include short stories, like Malinda Lo’s “The Fox,” and poems, such as “The Moon Is Trans” by Joshua Jennifer Espinoza. She picked these works and others because they are available online for free, making them more accessible to all who are interested in joining the club.

Emma Welch, the coordinator for the Pride Alliance Center at the UI, is serving as an advisor for the project. She said she’s excited to see students take an interest in studying LGBTQ literature together, especially at a time when forming bonds within the community might be difficult due to COVID-19.

The book club will place emphasis on LGBTQ authors and stories — something that Spectrum UI president Joseph Haggerty said is often missing from the curriculum in many elementary, middle, and high schools. Haggerty said it is for this reason that studying and recognizing LGBTQ art and history is so important.

“I think it’s really important to intentionally and as a group seek out to answer and talk about those stories that are neglected to be talked about in common core education,” Haggerty said. “I think it will be good for it to set a precedent of ‘we can have these good intentional groups and conversations to talk about matters that aren’t mentioned.”

Haggerty, Welch, and Hoffman all said they believe that in the midst of various social isolation measures, the need for groups like this — ones that will foster community — is stronger now than it ever has been. Hoffman also emphasized that in addition to that sense of community, the messages conveyed in LGBTQ literature are equally important.

“[It’s] important to make ongoing oppression visible and talked about and also help the people experiencing it feel less alone,” she said. “I also feel like happy stories are also just as important…for LGBT people to just know that it’s going to be OK and that their lives can have joy and love and anything they dream of.”